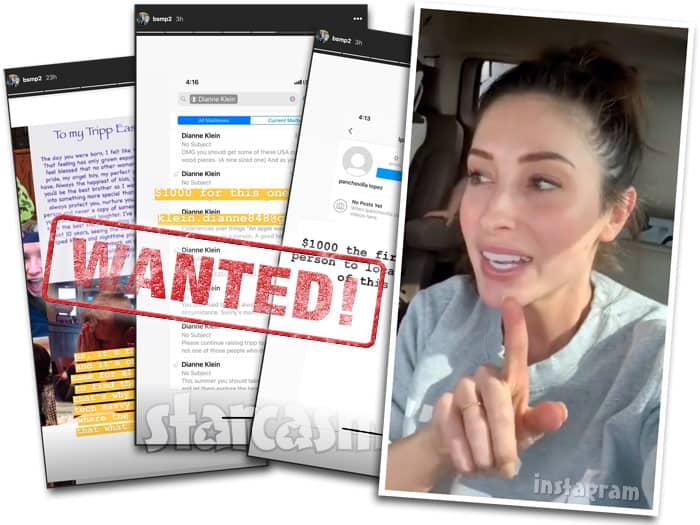 Teen Mom OG star Bristol Palin is no stranger to stalking. Thanks to the exposure from her mother’s Vice Presidential run in 2008, the Palin family has been dealing with an obsessed man named Shawn Christy for more than a decade. Bristol talked about the latest incident (in which Shawn broke in Dakota Meyer’s home in Kentucky with a sledge hammer) on the most recent season of the show.

But Shawn isn’t the only stalker Bristol has been dealing with. In a series of posts made on her Instagram story over the weekend, Bristol reveals that her inboxes are continually inundated with emails, messages, and photos that she believe are from the same person using multiple social media accounts and email addresses.

Bristol is so fed up with the continuing harassment that she is offering a $1,000 bounty for anyone that is able to track the emails or social media accounts to a specific address.

“$1000 to the first tech savvy person to locate the address of this person,” she wrote over a screen cap of an Instagram account with “lpanchovilla” as the ID.

She shared two additional images with emails from accounts zimmermanm@yahoo.com and klein.dianne848@gmail.com. “Another account from the top of my head,” Bristol captioned one of the screen caps. “I get dozens [of] DM’s a day, on every platform. It’s all the same weirdasso, but I am so over dealing with it.

Bristol reveals that the “it’s been going [on] for almost a decade,” before adding that “they mail me pictures of my kids.”

Bristol shared an example with a photo montage of her son Tripp along with a creepy message: 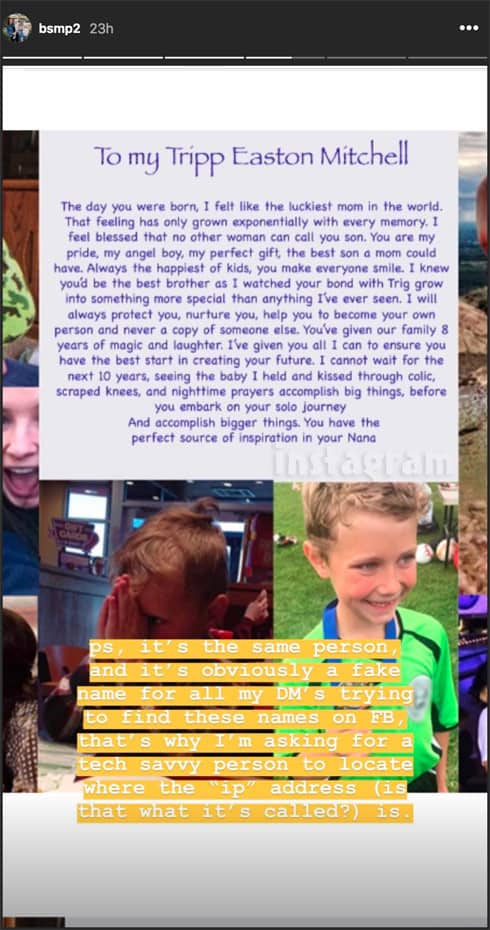 Bristol iterates that she believes “it’s the same person” and says she has tried to research the names to no avail. “That’s why I’m asking for a tech savvy person to locate where the ‘ip’ address (is that what it’s called?) is.”

I am nowhere close to being “tech savvy,” but I’m pretty sure that someone would have a lot better chance of getting Bristol the information that she needs if they have access to the actual emails and images that were sent. Hopefully she has had someone reach out to her to get that information and help track this person(s) down! (Bristol hasn’t provided any updates or announced that the bounty has been paid.)

In other Bristol Palin news, she recently revealed that she is still unhappy with how MTV chooses to edit her for Teen Mom OG. A lot of fans (this one included) were a bit surprised when it was announced last month that Bristol would be returning for another season after she lashed out at MTV for their “fake fill-in Farrah Abraham/Jerry Springer BS” portrayal of her. But, it seems Bristol may already be regretting that decision.

“I was at a conference all weekend — for my real life,” Bristol began an Instagram post last week while at an out-of-town realtor’s conference. “Teen Mom OG was well aware that I was out of town and not with my son, they still had his dad call me (six times) while his dad was on camera filming,” she added. “How do you think that’s going to be played out?” Bristol concluded with a crying laughing emoji and the hash tag #theshowisajoke. 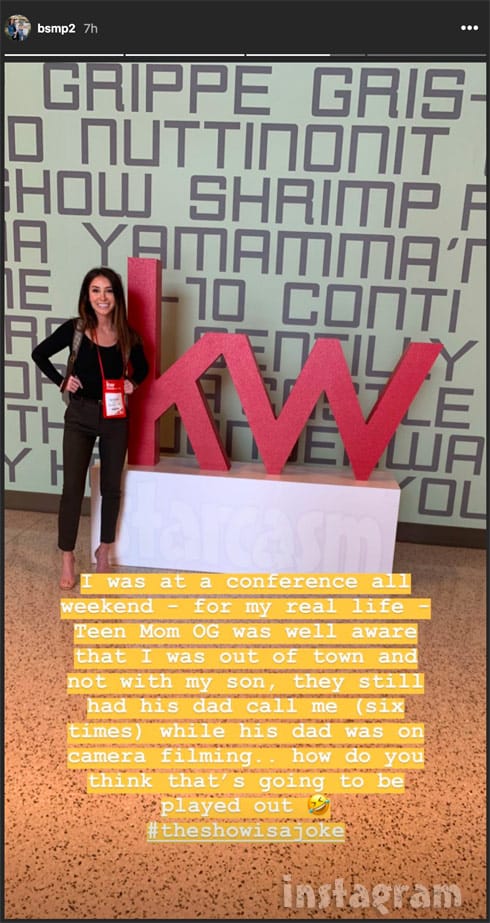