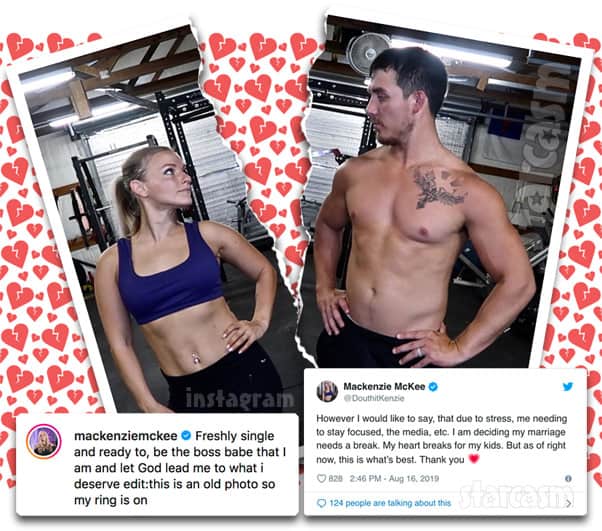 Mackenzie posted a photo of herself on Instagram with the announcement: “Freshly single and ready to be the boss babe that I am and let God lead me to what I deserve.” She later edited the caption to point out “this is an old photo so my ring is on.”

Over on Twitter, Mackenzie shared a little bit more information as she confirmed the split. “I would like to say, that due to stress, me needing to stay focused, the media, etc. I am deciding my marriage needs a break,” she tweeted just a couple hours ago. “My heart breaks for my kids,” Mackenzie continued. “But as of right now, this is what’s best. Thank you ?”

She then responded to a few tweets with more clarification:

MACKENZIE: We were. We were truly best friends. It’s all just devastating

TWEET: We only see what TV shows but from day one I could tell he fully didnt love you. You deserve better and happiness. Maybe even therapy to figure some things out. Much love hun and goodluck ?

MACKENZIE: I know in my heart he loves me. This was my decision 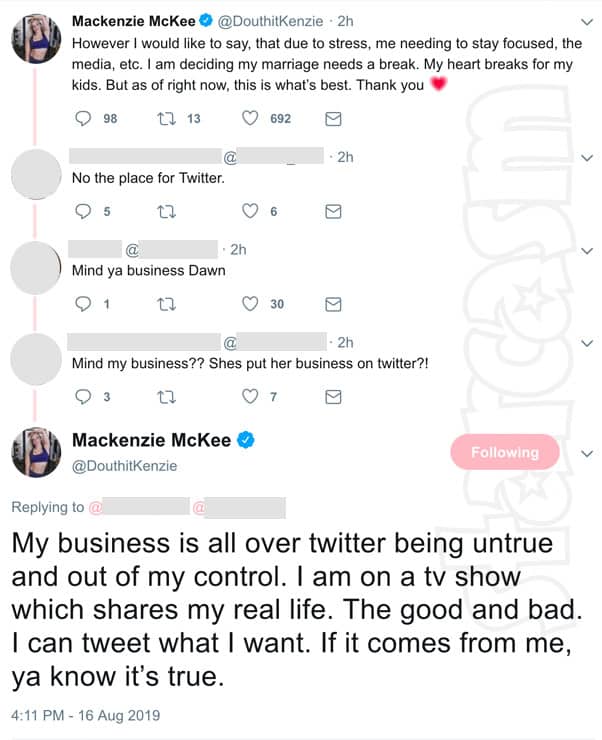 Folks who have been following Mackenzie since her time on Teen Mom 3 are a little wary about the validity of the split given how often she similarly “cried wolf” in the past. Mackenzie’s recent addition to the cast of Teen Mom OG, with reports that MTV is waiting to gauge fans’ interest in her story before inviting her back, only makes the timing of the announcement more suspicious.

It appears as though Mackenzie is still represented by PR agent Gina Rodriguez. Gina is infamous for her “no publicity is bad publicity” tactics and was reportedly the one behind Mackenzie and Josh’s rumored sex tape being shopped to Vivid Entertainment back in the day. (We went into a little detail about the GR Media formula when her clients Amber Portwood and Matt Baier were reportedly shopping their sex tape to Vivid.) Mackenzie later admitted there never was a sex tape.

Gina also has TMZ on speed dial and played a major part in all of the previous Mackenzie and Josh divorce stories getting attention back in 2016-2017, including the whole thing about Josh flushing his wedding ring down the toilet.

“The p0rn video was all [Mackenzie’s] idea,” Josh explained in a frustrated series of posts in 2017. “Me throwing my wedding ring down the toilet was all her idea, Me leaving her when she was pregnant was all her idea, the funny thing is I was laying in our bed at our house when I seen that one.”

“Goodness sakes I would never write those stories,” Mackenzie responded at the time. “I went through hell and back with the p0rn thing and I hopped on social media to speak about how none of that was true.”

If Mackenzie and Josh are truly split, it would mark the end of a six-year marriage. Tomorrow is the six-year anniversary of their cowboy-and-cowgirl-themed wedding featured on MTV, but Mackenzie has since revealed that she and Josh eloped and were actually married on June 17.