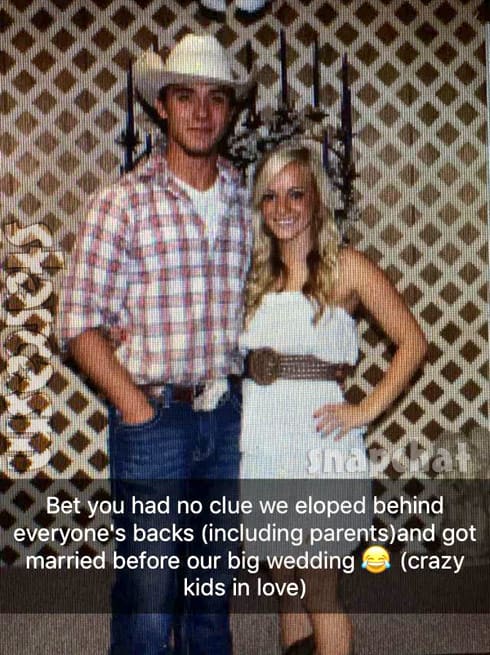 Teen Mom 3 star Mackenzie McKee just confirmed that she and husband Josh McKee were married before their cowboy-themed wedding featured on the show. Mackenzie shared some never-before-seen photos from her and Josh’s secret elopement on Snapchat, including one with the newlyweds consummating their on-the-sly marriage with a kiss: 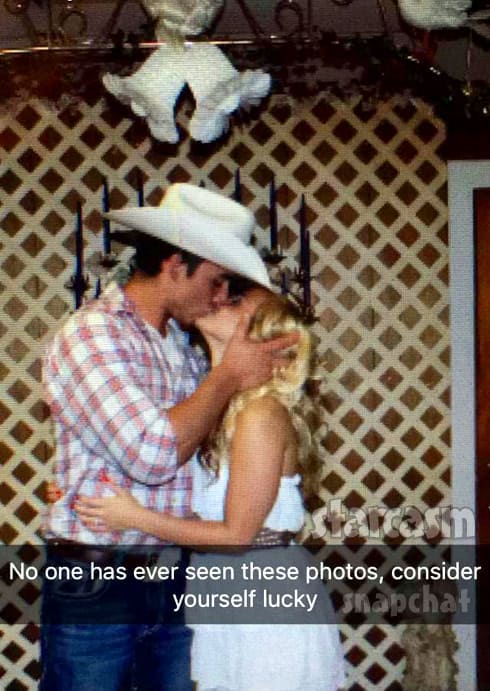 “Bet you had no clue we eloped behind everyone’s backs (including parents) and got married before our big wedding,” Mackenzie captioned one photo, before adding a laughing face emoji and describing her and Josh as “crazy kids in love.”

I thought I remembered something about Mackenzie and Josh potentially getting married prior to their wedding in August of 2013, so I went searching through the Starcasm archives. Sure enough, less than a week before she and Josh boot scooted down the aisle together on August 17, 2013, Mackenzie tweeted about already being married — for months!

UPDATE – Click here for details about Mackenzie’s elopement straight from Mackenzie herself, including her actual wedding date!

Been married for months but im not allowed to get pregs with my husband without miami girls subtweeting… do i look like I care????

im married yall and happier than all of you. God knows what he is doing…. get a life….

It’s unclear exactly when Mackenzie and Josh actually got married. Here is a rough timeline of their nuptials based on what we do know:

October 11, 2012 – Mackenzie tweets a photo of Josh and she refers to him as her boyfriend. She later confirms that the two are no longer engaged. “Yes, Josh is just my boyfriend,” Mackenzie tweeted. “We got rid of the ring for it had too many bad memories. Starting over and doing things right.”

January 7, 2013 – Mackenzie reveals she and Josh are engaged again by posting a photo of her new engagement ring and writing “I said yes.” Mackenzie also revealed that she and Josh planned on moving to San Diego after Josh joined the Marines.

March 9, 2013 – Mackenzie announces that her and Josh’s engagement is off, just one month prior to their planned wedding in April.

??? – Mackenzie and Josh get back together with a new wedding date set for August 17.

August 12, 2013 – Mackenzie reveals that she is 12-weeks pregnant and she and Josh have “been married for months.”

August 17, 2013 – Mackenzie and Josh have their wedding in Pittsburg, Kansas with roughly 200 guests (including the MTV film crew) in attendance.

In case you missed it, Mackenzie and Josh recently had a huge falling out amid cheating allegations. Since the split, Mackenzie has seemingly become more and more nostalgic about their relationship. In addition to the elopement photos, Mackenzie also shared numerous other older pictures of Josh on Snapchat, including one that she captioned with “My ♥.” Here’s another: 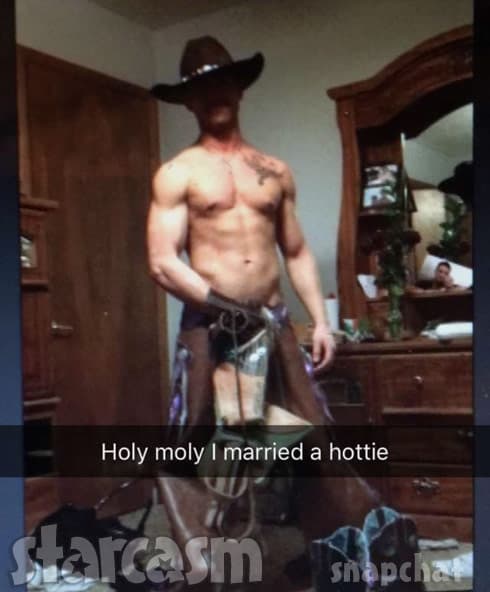 “Sorry guys,” Mackenzie wrote after posting the Josh pics, “going through my old laptop and I had to share these.”