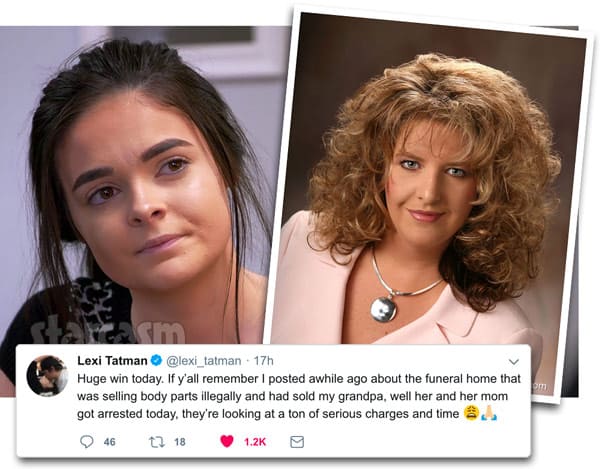 The woman who helped inspire former Teen Mom: Young and Pregnant star Lexi Tatman to want to be a funeral director has been arrested, along with her mother, for allegedly selling decedents’ body parts without the consent of the family members. Lexi and her family were one of the victims of the fraudulent scheme, which also included sending family members fake cremains.

“Huge win today,” Lexi tweeted on Tuesday. “If y’all remember I posted awhile ago about the funeral home that was selling body parts illegally and had sold my grandpa, well her and her mom got arrested today, they’re looking at a ton of serious charges and time ???”

We did an extensive post about the allegations back in November of 2018, which includes more information about Lexi’s ties to Megan Hess and her funeral home. In regards to the recent indictments and arrests, here is the full statement issued by the U.S. Attorney’s Office on Tuesday:

DENVER – United States Attorney Jason R. Dunn today announced that the operators of Sunset Mesa Funeral Home in Montrose, Colorado, were arrested for illegally selling body parts or entire bodies without the consent of the family of the deceased. The two operators, Megan Hess, age 43, and her mother, Shirley Koch, age 66, appeared virtually before a U.S. Magistrate Judge in Grand Junction, where they were advised of their rights and the charges pending against them. The Denver Field Office of the FBI and the Department of Transportation Office of the Inspector General joined in today’s announcement.

According to a recently unsealed grand jury indictment, from 2010 through 2018, Hess and Koch operated Sunset Mesa Funeral Directors (SMFD), which purported to provide burial and cremation services. Hess, and at times Koch, would meet with families seeking cremation services, and would offer to cremate the decedents’ bodies and provide the remains back to the families. SMFD would charge $1,000 or more for cremations, but many never occurred.

In at least dozens of instances, Hess and Koch did not follow family wishes, and neither discussed nor obtained authorization for Donor Services to transfer decedents’ bodies or body parts to third parties. In the few instances where families agreed to donation, Hess and Koch sold the remains of those decedents beyond what was authorized by the family, which was often limited to small tissue samples, tumors, or portions of skin. Hess and Koch also delivered cremains to families with the representation that the cremains were that of the deceased when, frequently, that was not the case.

Hess and Koch would also ship bodies and body parts that tested positive for, or belonging to people who had died from, infectious diseases, including Hepatitis B and C, and HIV, after certifying to buyers that the remains were disease free. These shipments would be through the mail or on commercial air flights in violation of Department of Transportation regulations regarding the transportation of hazardous materials.

This investigation was complex and involved a detailed forensic review of evidence. At a later date, the U.S. Attorney’s Office will be conducting a victim-only meeting to provide additional information and answer victim questions.

“The defendants are charged with committing a blatant fraud on many, many victim. This betrays a fundamental trust during one of the worst times in a person’s life – having to make arrangements for a deceased loved one,” said U.S. Attorney Jason Dunn. “It is hard to imagine the pain and worry of those who used Sunset Mesa and not knowing what happened to their loved ones’ remains.”

“I also want to recognize the hard work of the men and women of the FBI who conducted this investigation,” added U.S. Attorney Dunn. “This was an extremely complex case and would not have resulted in charges absent their dogged work.”

“Let today’s actions serve notice to those who would commit such self-serving acts of callous greed, we will diligently and tirelessly work to bring you to justice,” said FBI Denver Assistant Special Agent in Charge Dameon Hutto.

“Today’s indictment stemming from the illegal transportation of hazardous materials is a clear signal that such illegal acts will not be tolerated,” stated Lisa Glazzy, Acting Regional Special Agent-in-Charge, U.S. Department of Transportation Office of Inspector General (DOT-OIG). “Working with our law enforcement and prosecutorial colleagues, we will continue to protect the public’s safety from those who would seek to circumvent DOT-related laws and regulations.”

The information provided today, as well as the information contained in the indictment, are allegations, and the defendants are presumed innocent unless and until proven guilty.

After sharing her initial announcement about the arrests, Lexi responded to numerous tweets about it. Here are some examples of her interactions with her followers:

TWEET: Someone SOLD parts of your grandpas body after he died?!?! What the hell?! That’s horrible!!!

LEXI: Yes. It’s Sunset Mesa Funeral Home. I had a whole story on it but I deleted the tweets during a breakdown lol anyways this lady essentially used donate life to pretend to “donate” body parts. We were notified by the FBI of what she had sold, my mom knows what but I don’t want to know what she sold. She literally went and got tools at Home Depot to cut bodies up and sell them to various places. You can look up Megan Hess or Sunset Mesa Funeral Home to get more details about it.

#TeenMom #YoungAndPregnant star @lexi_tatman reveals that her family was victimized by organ and tissue harvesting crematorium and funeral home currently under investigation by the FBI! https://t.co/UCdyEzvGQf

LEXI: Thank you ❤️ We’re very relieved she is in custody now, I know she’s looking at a ton of serious charges. I just hope she gets what’s coming to her

LEXI: Thank you❤️ Unfortunately it happened and even more unfortunate is that some families didn’t even get their family members back (cremation) and the whole body was sold. All I can ask is that she gets what’s coming for her and may we all find peace

LEXI: The worst part is that this is a common thing in the industry. A lot of states don’t have definitive laws against it either

LEXI: Other news though, her funeral home has now been turned into a place for pregnancy and helping families who need it

TWEET: I go to school for mortuary science and this story is absolutely horrific. There’s a special place in hell for both of them.

LEXI: It is. I hope this is a good reference of what happens when you become greedy. You can’t get into the business because you think you’ll make a lot of money, it’s all about helping families. I wish you luck! I was unable to finish mortuary school

TWEET: Oh my GAAAAWWWWDDDD! ? That is absolutely awful and disturbing.

LEXI: It’s so horrid. I can’t help but hate her and her family. I actually feel really bad for her daughter because she unfortunately has the relation with her and it’s effecting her which it shouldn’t since she had no hand in this.

It was actually easier for her if the family wanted a cremation. (Totally go for it if that’s what you want. That’s what I plan on getting cause I don’t wanna be alone in the ground) a lot of places offer you to view the cremation as it starts and ends

TWEET: Oh I’m sorry to hear that, how did you find out?

LEXI: The FBI contacted us and other families

LEXI: Most of what I was told was she used donate life as her cover at first. I think she became sloppy and started selling whole bodies. It was easier for her to cover up when families wanted cremation (nothing against cremation, The remains are “easier” to fake) she sold them to schools allegedly (which I think there’s something fishy there of her faking documents or something along those lines since schools are very particular about all of that) I think a few people over seas bought from her. Supposedly she faked tests of bodies that tested positive for certain diseases. I’ve heard a lot of stories but I can’t say that all of them are from reliable sources. Those were the ones that are from reliable sources

TWEET: My boyfriend’s aunt had an old neighbor in Montana who did this sh*t too! Wtf is wrong with people. He was also burning piles of bodies and just giving peoples random ashes. He was selling peoples gold teeth he’d found on the black market. So nuts!

LEXI: She was selling gold teeth too. I think some people get into the funeral business for the wrong reason thinking they’ll make a lot of money but realize that they don’t and end up doing whatever they can to make more. Maybe just in her case though. I know she did it for money

As Lexi mentioned in her tweets, she left mortuary school before finishing. As we previously reported, she is now pursuing a career as a nail technician. We spoke with her at the time of that post, and she revealed that her decision to not pursue her previous dream of being a funeral director was the result of something that happened in her personal life and was unrelated to the scandal surrounding Megan Hess and Sunset Mesa Funeral Home.

#TeenMom #YoungAndPregnant @Lexi_Tatman no longer wants to be a funeral director after her mentor was named in an FBI organ harvesting investigation! (It's unclear if that was the actual reason) Plus, see a recent photo of her & Kyler's 3-mo-old son Jay! https://t.co/AeusFynEKx

Despite the U.S. Attorney’s Office’s statement indicating that Megan Hess and Shirley Koch were arrested, they do not appear to have actually been booked into jail. They “appeared virtually” for the indictment proceedings and entered not guilty pleas. Both “are believed to be out on bail,” according to CPR News.

In addition to the numerous criminal charges, Megan Hess, her mother Shirley Koch, and Sunset Funeral Homes have also been named in several civil suits representing more than 70 alleged victims.

For those of you wanting more details about the allegations against Megan and Shirley, here is the full indictment: