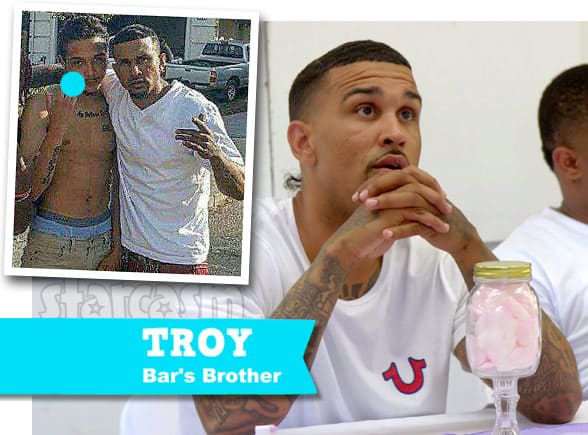 As viewers of Teen Mom: Young and Pregnant are aware, the older brother of show star Bariki “Bar” Smith was convicted of murder earlier this year. Troy Seales, who was featured briefly during Season 1 in the memorable scene at Ashley Jones’ baby shower, was convicted by a jury on April 6 of shooting and killing 22-year-old Deandre Adams on August 25. Sentencing was scheduled for the following month, but that sentencing never happened thanks to the defense filing a motion for a new trial.

In the motion, Troy’s attorney Todd L. Bequette makes accusations of prosecutorial misconduct and introduces new and revised testimony from crucial witnesses in the case, in addition to claiming “there is significant evidence that more than one of the trial jurors slept during the trial on more than one occasion.”

Here is a bullet point summary of most of the arguments made in the motion, followed by a more comprehensive recap:

• The mother of Troy’s children (I will call her Michelle) told police that Troy confessed to the crime to her. She later recanted that testimony on the stand, and it has since been revealed that the prosecution played her Troy’s romantic jailhouse conversations with another woman (and another witness) in the case, and informed Michelle that the woman was pregnant with Troy’s baby just prior to taking her statement. (And just before her testimony, she was informed by the DA that Troy and the other woman were married.) She still insists that her statement about Troy’s confession was made because she was furious at him.

• The identity of key witness for the prosecution, Kendrick Riley, was ordered to remain sealed until just days before jury selection, resulting in the defense team’s inability to discuss his testimony with Troy, and also the defense team’s inability to locate Kendrick prior to confronting him on the stand during the trial because he did not have a “stable residence.” Kendrick’s damning testimony, which reportedly includes seeing Troy carrying an assault weapon out of an apartment just prior to the shooting, was not recorded by the DA, and there are conflicting reports as to whether or not Kendrick was shown video of Troy leaving the apartment prior to him giving a statement. Kendrick is now willing to testify that he never saw Troy carrying an assault weapon while leaving the apartment.

• A woman we will refer to as Dorothy was a resident at the apartment in question, and she is willing to testify that Troy did leave the apartment with a weapon that he was trying to sell, before returning later. When he departed just prior to the shooting, she says he did not have the rifle in his possession — all of which seems to be backed up by the surveillance video. Dorothy says she did not testify at the trial because she lives in Section 8 housing and was fearful that admitting there was a weapon in the residence would mean she would lose her apartment.

• There are at least two specific references to jurors sleeping during the trial, one during the defense attorney’s closing argument, and another based on a photo that was posted online by Bar and Troy’s mother Shenandoah “Shen” Williams. The motion lists witnesses willing to testify to seeing witnesses fall asleep during the trial. 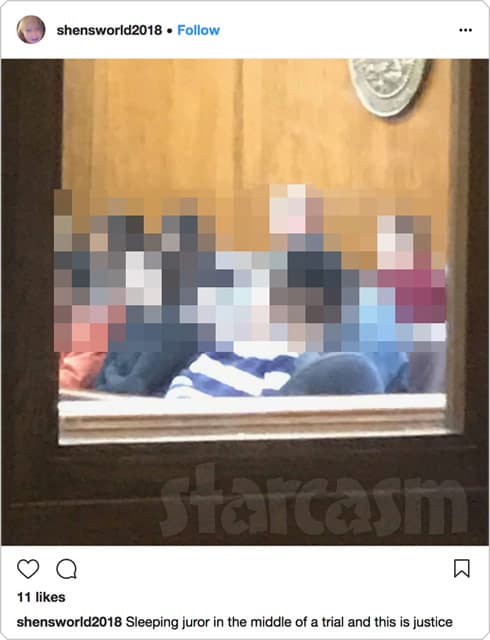 • The prosecutorial misconduct allegation stems from a “pattern of conduct” by the prosecutor, which the defense team claims resulted in “an unfair trial and denied defendant due process.” In addition to the handling of the testimony of Kendrick and Michelle, the motion claims that the District Attorney asked leading questions in the trial which “positioned the District Attorney as a witness.”

After reading through the entire 30+ page motion, there does appear to be a mountain of evidence in favor of a new trial. It is extremely disadvantageous that the defense team was not allowed to question one of the prosecution’s key witnesses, nor even reveal his identity to their accused client, until just before jury selection — at which point it was too late to round the witness up. Of course, Kendrick’s identity was ordered withheld due to fear of harm at the hands of Troy, and I don’t think that concern can be discounted, either.

The rest of the motion seems to be an attempt to retry a real sh*t show of a case based on the testimony and lack of testimony from a series of witnesses that were jealous, angry, or afraid of being prosecuted themselves.

One thing that is not clarified in the motion is whether or not the weapon in Dorothy’s apartment was proven to be the one used in the shooting. If it was, then that means Troy was the last one seen with it — at least according to the video evidence, which seems to be the only indisputable evidence either side has.

I’m no legal expert, but I think it is completely reasonable to say that if the defense team was armed with what they know now during the trial, that Troy very likely would not have been convicted. The question, though, is whether or not the motion meets all of the requirements for a new trial. The Court may grant a new trial “when new evidence is discovered material to the defendant, and which he could not, with reasonable diligence, have discovered and produced at the trial.”

The prosecution argues that Dorothy’s testimony fits the bill because she withheld any knowledge of the weapon’s whereabouts in her apartment or its connection to Troy in her prior testimony for fear of losing her apartment, so “reasonable diligence” on the part of the defense team would not have gotten to the truth because they didn’t even know to look for it.

Also important to note when considering whether to give the revised testimony of these various witnesses merit as far as granting a new trial is that “the role of the trial court in deciding a motion for new trial based upon a witness’s recantation is to determine whether the new evidence is credible, i.e. worthy of belief by the jury.” In other words, it’s not whether the court believes their most recent testimony, but whether or not it might be believable by a jury — an important distinction.

Here is a more detailed account of the revised and new testimony by the defense witnesses in the case. (I feel that most of the rest of the motion is appropriately summed up in the bullet points above.) 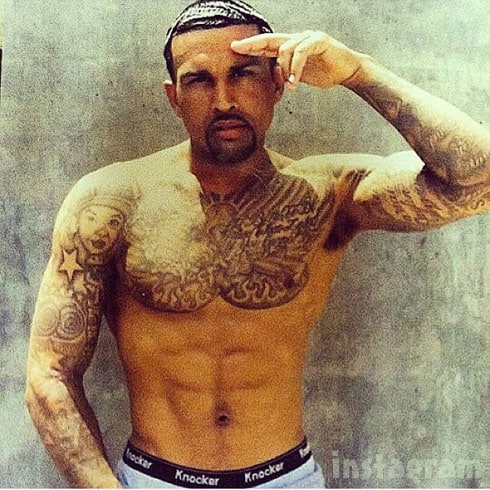 The prosecutor and the DA Inspector interviewed key witness Kendrick Riley in the District Attorney’s Office and he stated that he saw Troy in possession of an assault weapon on the day of the shooting. In a second meeting with the DA and his inspector, Kendrick “was more specific, telling them that just prior to the shooting, defendant said that he planned to ‘take care of’ the victim, and then armed himself with an assault rifle prior to leaving the apartment.”

The interviews with Kendrick were not recorded, and seemed to conflict with his “previous statements to the police which made no mention of defendant.”

Mr. Riley did not mention defendant’s possession of of an assault weapon when initially interviewed by the police, and he was arguably motivated to cooperate with the prosecution in order to avoid prosecution as an aider and abettor himself, and also to assist the prosecution, who was prosecuting his brother for the same murder.

Prosecutors sought and obtained an order preventing the defense counsel from revealing to anyone, including the defendant, the identity of Kendrick Riley. The prosecution argued that Troy might harm Kendrick if he found out his identity. That order was lifted two days prior to jury selection.

“The defense was eager to interview him and test the accuracy of the Inspector’s report. However, at the time Mr. Riley did not have a stable residence, and the defense was left with no time to locate him prior to the trial.”

Another major question mark in regards to Kendrick’s testimony is whether or not the assault rifle was visible or concealed when Troy left the apartment.

Subsequent to the trial, the defense met with Mr. Riley. He is prepared to testify that he never told the District Attorney and Inspector Basa that he saw defendant in possession of an assault weapon prior to the murder. He is also prepared to testify that he did not hear defendant say that he planned to “take care of” the victim, or words to that effect. He now explains that at trial, he feared that if he told the truth about his statement, he would have been prosecuted.

The Defense now has an additional witness we have been referring to as Dorothy, who lived at the apartment that Troy was seen arriving at and leaving from on the day of the murder. Dorothy claims that the assault weapon was already at her apartment when Troy arrived, which conflicts damning testimony from Michelle claiming that Troy was already in possession of the weapon. Video seems to confirm Dorothy’s testimony in that no weapon can be seen when Troy arrives, but he can be seen carrying the rifle wrapped in a sheet when he leaves. Dorothy says Troy was attempting to sell the weapon.

Troy would later come back to the apartment with the weapon (or something similarly heavy) wrapped in a sheet inside a duffel bag, and leave again just prior to the shooting without it, according to Dorothy — once again backed up by the video footage in which you can see the weapon when Troy leaves and comes back, but not when he leaves a second time just prior to the shooting. In addition, Dorothy claims that another man was instructed to place the weapon in the trunk of a car parked nearby, which can also be confirmed by the video footage.

Clearly, if Troy did not leave with the weapon just prior to the shooting, and it remained in the apartment, then he could not have used it in the crime. “Counsel for defendant did not show [Dorothy] the surveillance video relevant to the case, nor did Counsel share with [Dorothy] the contents of the video, lending credibility to her testimony,” the motion adds.

As far as why Dorothy did not come forward sooner, she “explains that she did not initially reveal this evidence to the defense until after the verdict because she feared that admission of the presence of an assault weapon in her residence would cause her to lose her apartment, which is housing provided pursuant to the California Section 8 Housing Program.” 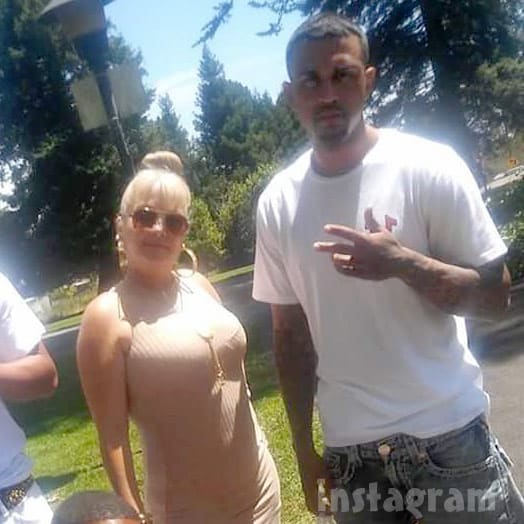 Some of the most damning testimony against Troy came from the mother of his children (whom we have been calling Michelle), who initially told police that Troy had confessed to the crime to her. Michelle’s testimony came after the District Attorney “played for her jail recordings of defendant’s romantic conversations” with Dorothy, “a woman whom [Michelle] admitted to previously attacking in a jealous rage. The prosecutor’s actions successfully turned [Michelle] against against the defendant again and resulted in her testimony which was anything but persuasive.”

As if that wasn’t enough to motivate Michelle’s damning testimony, she also says that “on the day I testified for the prosecution, Mr. Ford told me that Troy Seales and [Dorothy] were married. This was my first knowledge of their marriage.”

The next scheduled hearing in Troy’s case is scheduled for next week, although there have been numerous hearings scheduled over the last few months with no new developments. We will continue to monitor the case and update when there is ruling on the motion for a trial.

UPDATE – Here are the declarations from Kendrick, Michelle and Dorothy from the motion: 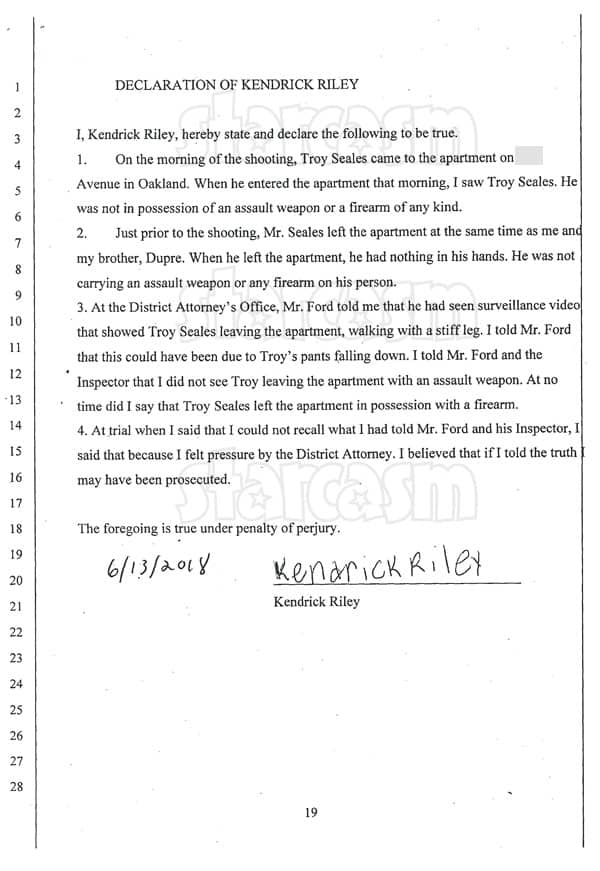 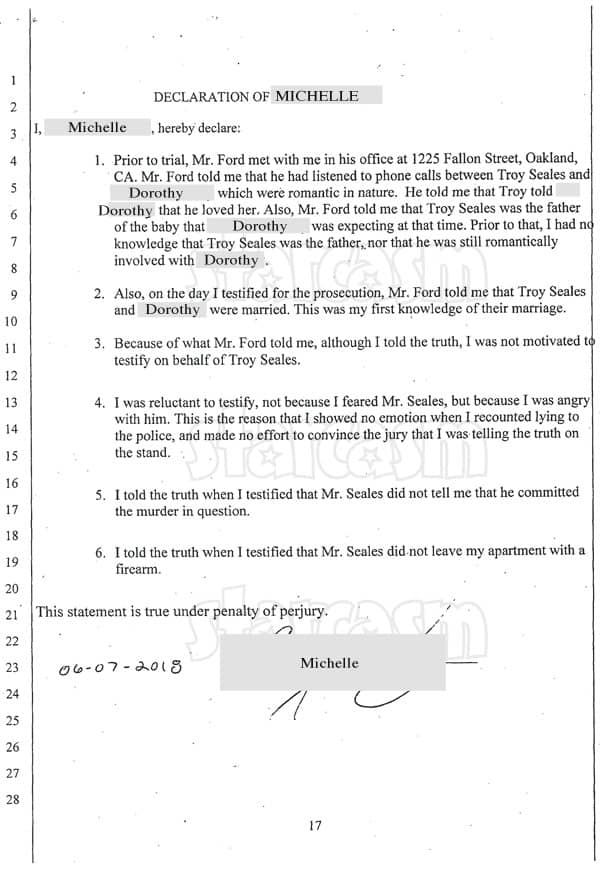 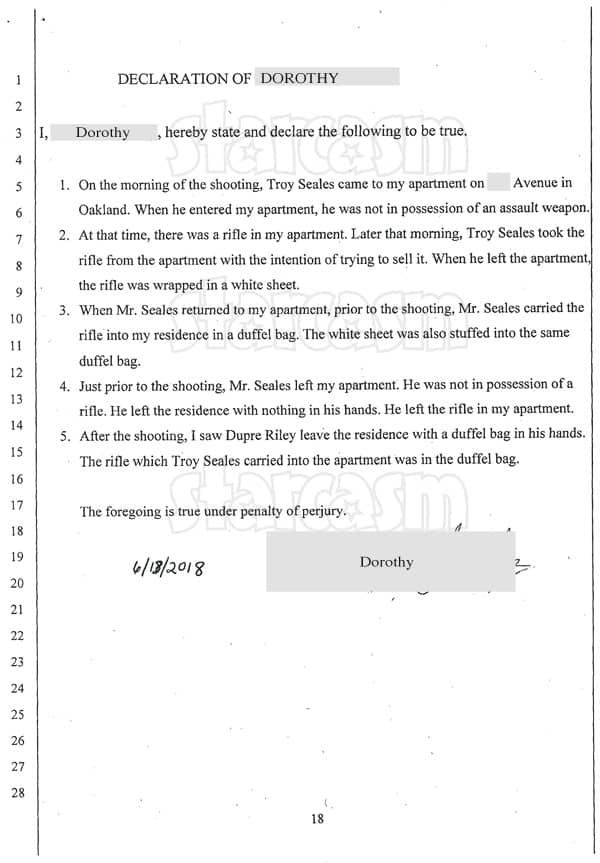