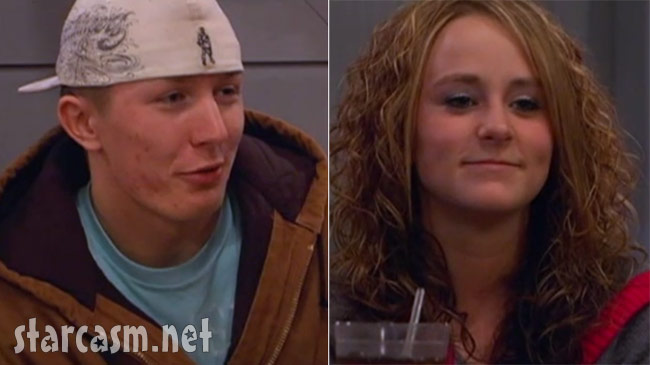 An important part of the back story between Leah Messer and Corey Simms from Teen Mom 2 is Leah’s romance with another young man after finding out she was pregnant with twins. This rebound romance was with her ex-boyfriend Robbie Kidd (pictured above). The renewed relationship between Leah and Robbie made it difficult for Cory to rekindle a connection with the mother of his children.

As we follow the first season of Teen Mom 2 we see Cory and Leah coming back together as they cope with the developmental issues of their daughter Ali as well as the struggles in regards to what happened when the two split.

In a follow up to this “ex situation” it looks like Robbie has been talking smack about the Teen Mom and Leah has taken to her Twitter account with a very succinct message for Mr. Kidd. Here’s what she Tweeted (with a little SFW censorship):

This was followed by another tweet that indicated Robbie was telling lies to get his pictures in magazines. The reply stated:

“…he’s getting paid to make untrue statements and have his pic in magazines!  Haha. Can you say loser!!??”

I’m not sure exactly which magazine Leah is referring to at this point but as soon as I come across what Robbie has, or hasn’t been saying about Leah I’ll update the post.  Just as a sidebar I came across Robbie’s MySpace page which appears pretty outdated but did have a few photos of Leah’s ‘F’ bomb target. Here’s my hand-picked favorite.

It looks like Robbie knows how to kick back and take it easy, at least when he’s not getting ‘F’ bombed by famous ex-girlfriends!

UPDATE: In early 2012 on Twitter Leah Messer admitted that she cheated on Corey a week before the wedding with Robbie Kidd. She also admitted this on an episode shown on MTV February 2012, which was taped in the Spring of 2011.