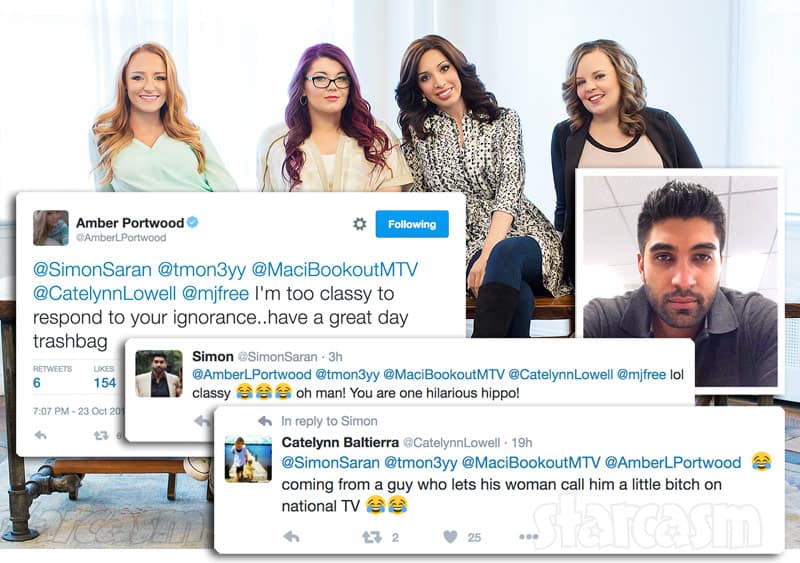 As we reported yesterday, things got WAAAYYY outta hand at the Teen Mom OG Season 6 Reunion taping this weekend when the topic of Farrah Abraham’s significant other Simon Saran calling Amber Portwood’s fiance Matt Baier a pedophile on social media came up. As Simon was reportedly in the process of sort of apologizing for his comment by implying it was all in good fun, Farrah chimed in that Matt does look like a pedophile. At this point, Amber Portwood reportedly rushed the stage and took a swing at Farrah (and missed). In addition, Matt reportedly pushed Farrah’s dad Michael into the crowd — all while Simon remained on the couch (probably smiling silently and eating high end carry out).

Click here for a full recap of what we know about the Jerry Springer-esque Reunion drama.

Since the dramatic Reunion show taping, the on-stage drama has spilled out onto social media — thanks mostly to Simon Saran continuing to troll his castmates and Teen Mom OG producers. I’ve tried to recap most all of the fallout drama in a succinct and roughly chronological timeline, not only to make it easier for all of you to catch up, but to preserve it for prosperity in case of the highly likely tweet and deletes.

I will kick things off with the “Mic drop” tweet from Maci’s husband Taylor McKinney, which is now believed to be in response to Maci’s speech about Farrah’s lack of professionalism just prior to her, Amber, and Catelynn walking off stage. (This incident was at a different taping than the one with the brawl.)

From there, Simon starts pouring gasoline and burning bridges left and right as he continued to bash Amber’s fiance Matt Baier (going so far as to claim that he physically abuses Amber) as well as Amber and Catelynn — the former of which he continues to refer to as a hippo, and the latter he calls “piggy.”

During the course of the feud, numerous others chime in in addition to Simon, amber, and Catelynn — including Farrah, comedian Stevie Ryan, Teen Mom 3 star Lekota Koch, and more. Also included are several screen caps of text messages between Farrah, Simon, and Teen Mom OG producers.

SIMON: lol. Amber you should work on your aim. And Matt should have came after me. P*ssy

AMBER: Matt went out there to get me not fight..her dad got in my face so Matt got in the middle and Michael choked him so Matt knocked him on his ass. While Simon sat on the couch the whole time lol..sending love?

SIMON: lol you embarrassed yourself! But great entertainment! Nice costume!

SIMON: lol. You angry angry hippo! I was to busy laughing at your face! #clown

SIMON: thanks for the good laughs. Your clown act matched your makeup last night @mjfree

AMBER: I’m too classy to respond to your ignorance..have a great day trashbag

TWEETER: you do realize that that was a response ? #notclassy

SIMON: lol classy ??? oh man! You are one hilarious hippo!

TWEETER (To Amber): Why’d you miss? Why didn’t you land the punch?

SIMON: lol because she was scared! That’s what loud moths do

AMBER: everyone will see when it airs lol?

SIMON: lol see your uncoordinated ass miss a punch from 6 inches away? #clown

TWEETER: I can see Amber has that anger issue under control ?

SIMON: lol I hope Gary gets full custody after this.

TWEETER: of course Simon sat there. He’s not a real man.

SIMON: lol why would I jump in? Farrah can handle herself

CATELYNN: obviously not cuz she cowered like a little b!tch ??

SIMON: cowered?Go back to sleep piggy.

CATELYNN: yea was scared as f*ck the look in her eyes ???

SIMON: scared? Lmfao Farrah stood there while amber was trotting

SIMON: about as terrified as the cow you ate lmfao. Piggy piggy

CATELYNN: wtf hahaha I love that’s all that u got on me #curvy4life

SIMON: lol Catelynn go roll around in the mud with your pig ?

SIMON: lol this is hysterical. Bunch of ass clowns ???

STEVIE RYAN: @SimonSaran is body shaming the #TeenMomOG cast but he’s the one putting it in backdoor Farrah’s baboon butt transplant…?

SIMON: you damn right! I have friends for you too ?

STEVIE RYAN: oh well then in that case hook a sister up ?

SIMON: Lol when producers want the #roast #teenmomog [with photo below] 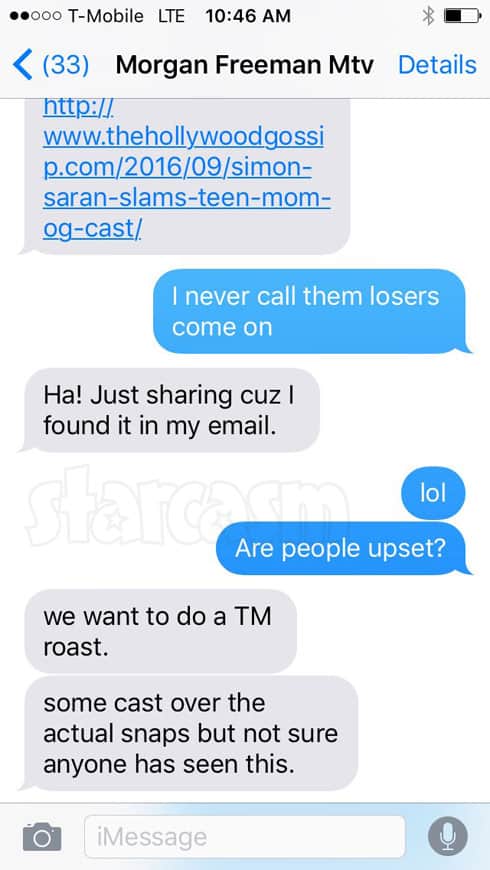 TWEETER (Simon retweet): @SimonSaran did ambie just call you out for sitting on the couch when that’s literally all she ever does?

SIMON: nah! The mic hasn’t been dropped. It’s just getting started [with photo above]

CATELYNN: ?coming from a guy who lets his woman call him a little bitch on national TV ??

LEKOTA (From Teen Mom 3): says the chick whose husband calls her fat ?

CATELYNN: coming from a girl that obviously doesn’t watch the show ??

SIMON: lol I wouldn’t touch her with a 10 foot pole

TWEETER (in response to the comment about Simon sitting on the couch and not being a real man): and Matt is mr mooch who doesn’t work?

FARRAH: Thanks Larry &the 3 stooges I’m always working non stop and got sick but still showed up & set still wasn’t ready for me- vile jealous liars (with photo below) 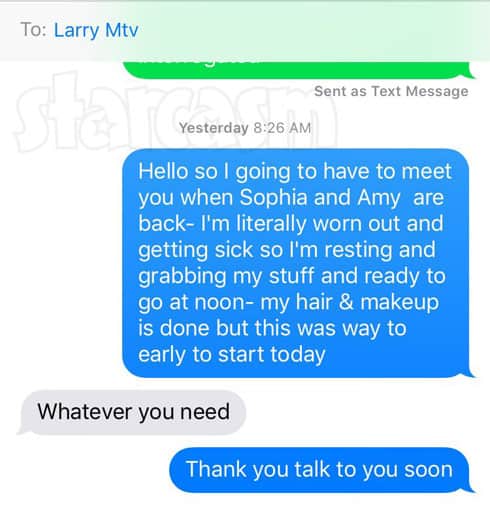 TWEETER (Simon retweet): @F1abraham seriously, the rest are just sitting on their damn couches while Farrah is out making shit happen & NEVER on the couch.

TWEETER (defending Amber as a good mom): In front of Leah. She’s a very hands on mom.

TWEETER: she’s definitely hands on when she was beating Gary in front of Leah

TWEETER: Seriously? And you know this how? Surely this isn’t true. No woman deserves to be abused by a man

AMBER: never ever ever has happened lol…he just wants to be famous..God this is disgusting honestly??! What a loser

SIMON: I’ll keep continuing to expose the real facts. It’s what I do best. #teenmomog

TWEETER: all u do is start sh!t w/ these beautiful ladies. U & Farrah deserve each other.

SIMON: Although I have received 0 pay. I would rather give it away to kids who really need it! Ronald * #teenmomog [with photo below] 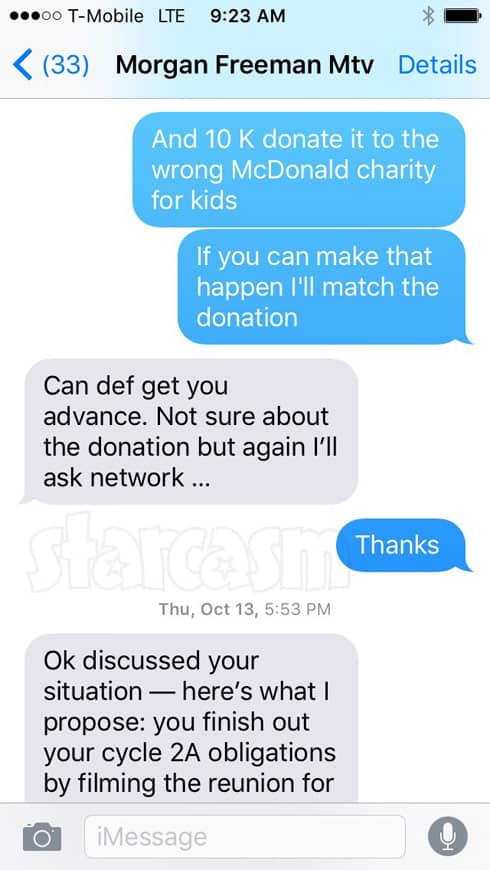 SIMON: nope. MTV is full of sh!t. They would rather make criminals rich instead of doing things for a good cause

When they go low…

TWEETER: Your probably just making all this sh!t up. How would you even know these were “facts”? nobody would tell you even if they were?

SIMON: I have a very good insider. I don’t need to lie.

TWEETER: insider=i.e., someone who doesn’t like the person he’s talking sh!t about. LOL Oooookkkkk!

SIMON: be patient. It will all come out.

TWEETER (responding to Simon’s initial Reunion recap tweet): Are u f***ing kidding me. I’m not crazy into teen mom but this is horrendous. Just goes to show that we need to stop making ignorance famous

SIMON: Thank you for understanding. Let’s get this show off air

TWEETER: if you hate the show so much why are you on it? I mean you didn’t have to be on it! But it makes you famous too…

SIMON: believe it or not, they come running when the know I’m in town.

TWEETER: I’m just saying you bash @mattbEPT for being on the show and using @AmberLPortwood to get famous when it could be said that you are doing nothing but the same thing but with Farrah

SIMON: I didn’t stock girls who were 16 and pregnant. I met Farrah at a charity event for kids. Nice try

TWEETER: I’m not asking how U got on the show. So I wasn’t bashing that. I’m sayin ur on the show cuz of Farrah

SIMON: I can care less about being on the show. I don’t depend on it.

Once producers are done filming, they hand over the footage to this man for editing #teenmomog #edwardscissorhands pic.twitter.com/MWoawfgmzI

TWEETER: but you said you’ve made no money.. So that wasn’t even your money you were asking to be donated? Classy move bro.

SIMON: clearly I have plenty of my own. I asked MTV to give back to kids who needed it and I would match it.

Engaging with someone unworthy of a reaction only gives the opponent the power. If you keep the power on your side, they have no ammo ✌?️

SIMON (to Teen Mom OG creator and Executive Producer Morgan Freeman): @mjfree me and you are going to have a nice talk when you grow some balls and answer your phone