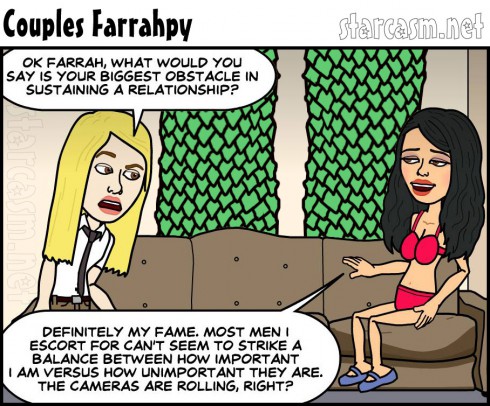 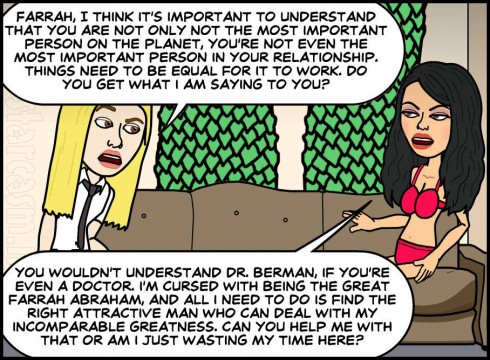 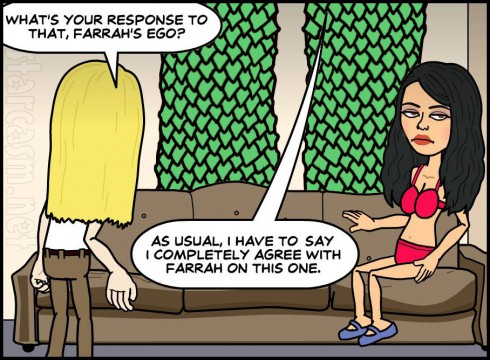 In case you missed it, former Teen Mom Farrah Abraham will be appearing on the upcoming season of Couples Therapy… by herself. I took it upon myself to play around with the latest rage on the internet, the comic-generating Facebook app Bitstrips, to predict what Farrah’s appearance on the show and discussion with therapist Dr. Jenn Berman might look like.

In my prediction, it turns out Farrah didn’t actually appear by herself on the show after all, because no matter where Farrah goes, she always has her gigantic ego with her. My vision of what we can expect seems to be validated by The Ashley’s Reality Roundup, which has a source on the set of Couples Therapy that reveals Farrah “was pretty defensive” during her segments. “She is going to look like an even bigger ass. She was kind of bitchy with the doctor.”

Farrah’s dad Michael Abraham seems to have a different take, however:

The show (on VH1) will be the most amazing filming of Farrah. She is working hard to improve herself for her child, herself, her family, friends, her business partners, and everyone she encounters. I am very proud of Farrah for the positive steps she has taken and hope the world will also see her improvements and efforts. I love you so very much Farrah!

I guess we will just have to wait until the new season of Couples Therahpy airs to find out!