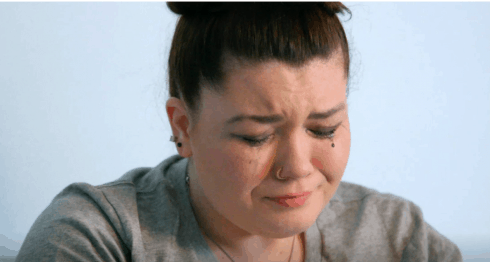 Last night’s season finale of Teen Mom showed Amber Portwood opening up about suicidal thoughts. She also addressed how being a reality star and public figure has been extremely tough to cope with.

“They can’t accept the fact that I have postpartum in any way,” she explained about Internet trolls and critics. “I just didn’t know what it felt like because I’d never experienced that before.”

Amber revealed that her relationship with boyfriend Andrew Glennon, the father of her new son James, has also been under pressure. “Our relationship has definitely been different. We’re not as lovey, we’re not as on each other as we used to be,” Amber revealed. “We’re really tired from the baby and we’re stressed out because I’m always unhappy.”

The episode also showed castmate Catelynn (Lowell) Baltierra visiting to support Amber during her difficult time. Catelynn has also struggled with postpartum and severe depression on the show and has been very open about treatments and her mental health reality.

Amber confided to Catelynn that she felt like she was “at her end” and felt no will to live.

“Just those words scare me. I would love to see you at a place where you could,” Catelynn replied. “But if you really need help, there are places you can go — know that. So you don’t feel hopeless.”

Amber also spoke openly about her frustration with being on Teen Mom. “This show has ruined my name. This show has not shown who I am as a person. They don’t show the funny side of me, they show bad mom, they show all that s—, they show the struggle, they show me crying, they show postpartum. So I go, okay, that’s what’s going on in my life so I guess that’s true. I’m over it.”

Later Amber called the shows producers to let them know she was angry with how she is portrayed on the show and that she wants to quit, a sentiment she has expressed online before.

If you or someone you know is struggling with suicidal thoughts, please consider contacting the National Suicide Prevention Lifeline at 1-800-273-TALK (8255) or text “help” to the Crisis Text Line at 741-741.