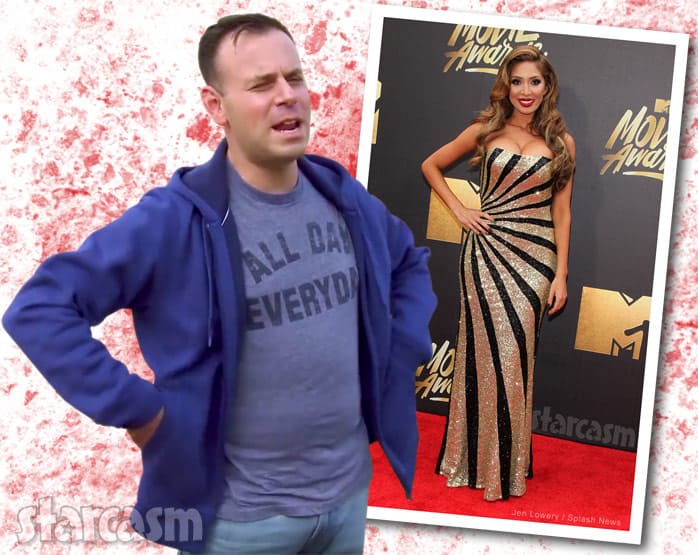 Farrah Abraham and Teen Mom OG co-executive producer Larry Musnik had an epic, headline-grabbing falling out last season, during which Farrah called Larry white trash and a “dumb, twisted mother f***er” before announcing she was quitting the show. Since that altercation, it appeared as though Larry and Farrah (Larrah?) had mended the fences, with Larry going so far as to appear on the reality star’s Farrah and Friends podcast. *

But a new video from the red carpet at the MTV Movie Awards seems to indicate there is still tension between the two, according to Farrah in an interview with Hip Hollywood. Farrah is asked how her relationship with Larry is now. “Larry was here. He was trying to get me kicked off the red carpet,” Farrah says.

She continues: “No, obviously, we worked out our battles and I have to just say as a business woman and a reality star and everything I do, I have to just say always stay grounded and have your boundaries and do not push to just be a yesser or pleaser in any entertainment business or field that you’re in. And that’s where I am today. Stay true to yourself.” 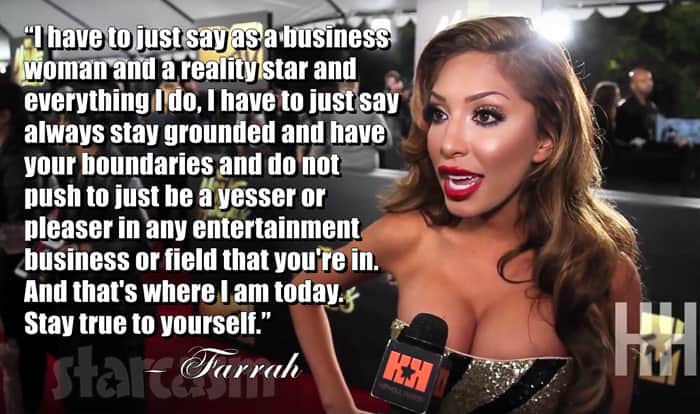 The interviewer is not distracted by Farrah’s life-changing self-help pronouncement, and remains focused on Larrygate. “So you and the producer are on good terms, or you’re not on good terms?”

Hmmm… Farrah sure doesn’t seem angry when she mentions that Larry tried to kick her off the red carpet — she’s more amused, I would say. I’m guessing this was just some statement or suggestion made by Larry that got blown a bit out of proportion? Perhaps we will know more when the new season of Teen Mom OG airs.

Meanwhile, let’s honor #FlashbackFriday with a look back at Larrah’s infamous “Trashy Spat” that ultimately ended up with Farrah shoving Larry and quitting the show. (Unfortunately, that last part is not included in the clip.)

* The Podcast One page for the Farrah and Friends podcast now displays the message “This content is no longer available.” I don’t know if that means Farrah has stopped doing her podcast or not.

Farrah Abraham releases Docu-COMEDY Domestic Goddess TOUR SKIT #1 video, but what is it?