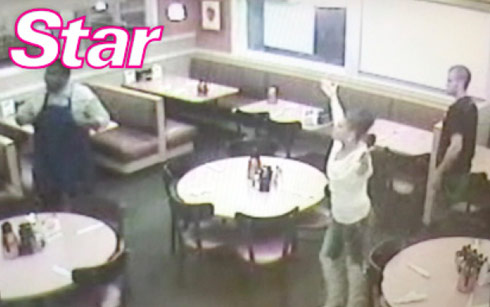 I guess in Anderson, Indiana IHOP stands for “International House of Pummeling” as troubled Teen Mom Amber Portwood has been caught on video in a fist fight at the chain restaurant.

Radar online has the exclusive images via Star Magazine that shows the now 21-year-old mother getting into it and asking, “Hoosier momma?” with a stranger. This pancake pugilism from November 18 went down like this according to a witness.

Amber was drunk and there was another patron who was drunk too who started talking jack about Portwood. Haven’t the folks around Anderson learned not to do that yet? Anywho, according to this eyewitness Amber overheard the talk and instigated the fight by standing up and stating:

“You don’t know anything about me! I’m gonna whup your ass!”

At this point Amber allegedly charged the other woman and punches were exchanged along with some hair pulling before the two were quickly separated.

According to Radar they’ve seen the footage but there’s been no posting of the video. To find out all the deets you can pick up the latest issue of Star and you can catch out the full gallery of images from the footage here.