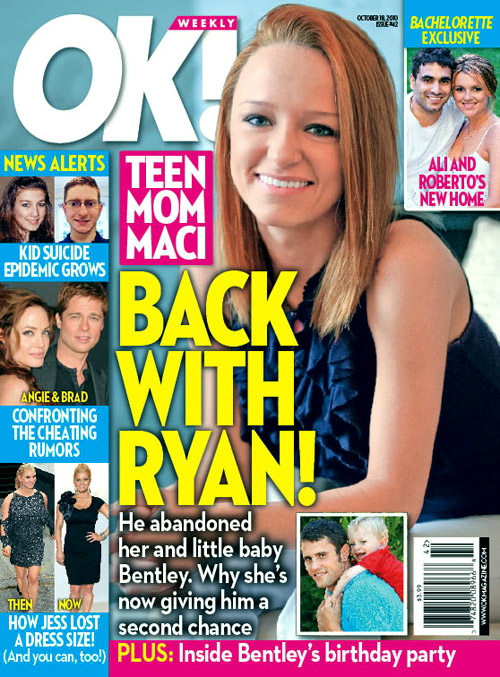 How did this happen?!? It seemed as though Maci had found her Prince Charming in Kyle and all of a sudden he gets “tired” of Maci and rides off into the sunset, and now Maci is going back to Sir Douchelot?!?

This is all according to an article in the latest issue of OK! magazine, due to hit newsstands tomorrow, October 7, 2010. The magazine confirms what we all saw in last night’s episode, that Maci Bookout has broken up with Kyle King and goes on to reveal that Maci is giving Ryan a second chance!

“I’m taking a break. I guess she wanted more,” he tells OK!. Ryan says that he and Maci have even talked about getting back together. “Maci calls to this day and wants to work it out,” Ryan, 21, confides. “Everybody says that [she’s still in love with me].”

I’m really depressed. Maci has been the epitome of maturity and grace under pressure on this show and it looked as though life was going to give her a break in the form of a responsible man who could offer reliability and companionship – and then POOF! Now poor Maci is heartbroken and jaded and probably thinks she doesn’t deserve or want anything better than Ryan. That girl is in need of an intervention!

UPDATE: October 8, 2010 version of US Weekly claims that Maci and Kyle are back together, have been dating for 8 months, and are happier than ever.

What do you think? Is going back to Ryan the right thing for Maci or Bentley or both?