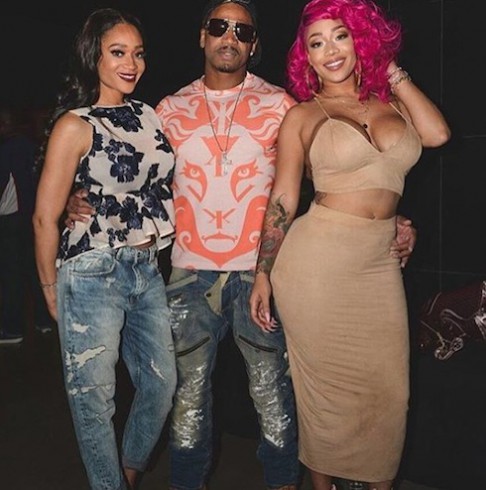 Love and Hip Hop: Atlanta stars Stevie J and Mimi Faust are reportedly lucky to be alive today, following a massive shooting in downtown Charlotte the pair are said to have very narrowly escaped. According to a new report, Stevie J may have gotten involved in a fight that led to the shooting, which Charlotte media reports involved at least one AK-47 and several dozen rounds of ammunition.

The report on Stevie J and Mimi Faust comes from Media Take Out, and claims that “goons” tried to murder the LHHA fixture following an argument that went sour very quickly. Apparently, Stevie J and Mimi Faust were in Charlotte for the CIAA basketball tournament this past weekend. They were engaged at the city’s Club Empire late Saturday night when, in the words of an insider, “”Stevie got into it with someone in the club–and they had a lot of friends. Before you know it, a bunch of people jumped Stevie and Mimi.”

After suffering only “minor injuries,” Stevie J and Mimi Faust managed to flee. It seems, however, that they were followed–and that at least one of their pursuers opened fire with a machine gun on the hotel and the van the pair had been driving in. A Charlotte Observer article on the incident noted that three men were arrested after “40 to 50” gunshots were fired in front of the Hyatt Place in downtown Charlotte, where it’s alleged that Stevie and Mimi were staying.

Here are some frightening photos from the scene in which you can see dozens of bullet holes in a black Mercedes van:

More than 2 dozen bullet holes in van, SUV, and hotel from hi-powered rifle in uptown Clt drive-by at 4am @wcnc pic.twitter.com/Hv6YKXUWSt

Neither of the pair has yet to comment on the incident on social media, but we do know that both Stevie J and Mimi Faust were in Charlotte specifically for the CIAA Tournament. Mimi had a separate club engagement on Friday night:

She later shared an Instagram update from the tournament itself:

Does Peter Gunz have a secret daughter? Rumors of hidden children proliferate in light of new baby news