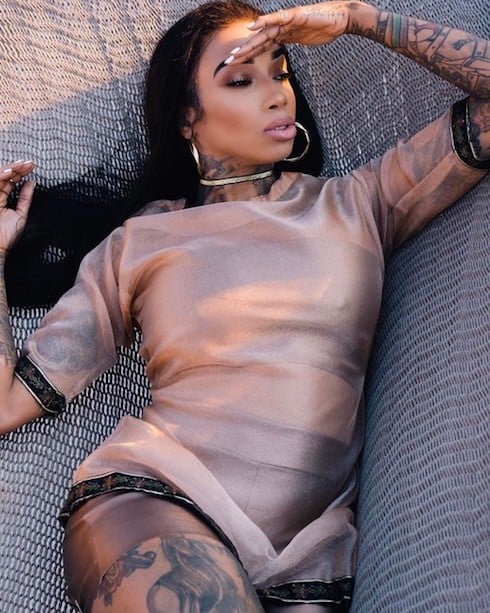 But it seems that Ceaser felt a little peace offering was in order. (Or, more likely, that Sky felt she was due something she’s been “hustling” for for a long time.) ‘Cause when Sky goes back to the shop after making nice, she’s got a whole potful of tea to spill–and a captive audience waiting with bated breath for her to spill it:

That’s right: not only is Black Ink heading to the dirty south, but Sky joins Black Ink Atlanta as its new manager and public face. She’s even got a suburban-style swagger pad to keep herself prominent:

Thankful For My New Home!!! ? @tahliadiaz Youre The Best Realtor Ever….. Grateful and Blessed… #Newbeginnings #YouCantBeefWitATrashCan #Blackinkcrew

We’re certainly happy to hear that Sky’s about to get an even bigger stage for her already outsized personality! But the relevant question now is: since Sky is joining Black Ink Atlanta the tattoo shop, does that mean she’ll be a major player on Black Ink Crew Atlanta the TV spinoff?

The answer isn’t as obvious as you might expect. Though Black Ink Crew and its Chicago-based spinoff the TV show continues to draw strong ratings for VH1, the “Black Ink” name technically only refers to Ceaser’s shop in Harlem. 9MAG, the setting for Chicago’s take on the show, is unrelated to Black Ink Crew’s Harlem location.

And, as we reported last month, Ceaser is opening up a new Black Ink Crew studio in Orlando, in addition to the one he just opened in the ATL. While we don’t know if VH1 is willing to entertain a show set in Orlando, we do know that the network has been casting about for an African-American owned and operated tattoo parlor in Atlanta to set the third iteration of the series.

We shouldn’t have to wait long to get our answer: filming for Black Ink Crew Atlanta is expected to begin later in 2017, with a summer 2018 debut allegedly planned.