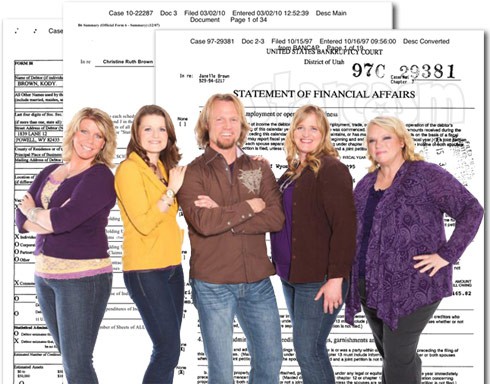 The polygamist Brown family of TLC’s Sister Wives have been in the media spotlight over the last month after we broke the story on February 1 that family patriarch Kody Brown had divorced his legal wife Meri Brown in September and later legally married his fourth wife, Robyn Brown, in December. TLC and the Brown family have seemingly embraced the media attention and have been teasing an explanation for weeks, with the promise that tonight’s two-hour season finale will FINALLY reveal the true reason for the “legal restructuring” of the family, as the Brown family called it in a statement.

The divorce and remarriage story has sparked quite a bit of debate and discussion online as fans, detractors, and those merely curious explore what it means to be a polygamist with multiple spouses in a country where you can only legally be married to one person. (Most people believe that the move was purely a legal one, done to somehow benefit Robyn’s children from a previous marriage — whether it be insurance, custody, taxes or whatever — because Kody would not have any spousal rights under the law due to the fact that the two weren’t legally married.)

Part of that focused attention has brought up another part of their past that seems unique to their situation: filing for bankruptcy three times since 1997.

The bankruptcies have been talked about extensively among devout fans and detractors of the show, including a CNN segment with Jane Velez-Mitchell in which producer Laurie Allen (Banking on Heaven, Follow the Prophet) said, “these people are scamming every which way, they’ve been in all kinds of trouble, they’ve all filed bankruptcy. They rotate the wives around — one files one year, a couple years later another one. They shift the debt around, they’re living off food stamps, they’ve been in all kinds of financial trouble.”

I think Laurie Allen’s words were a bit harsh, but there is some truth to them, and I think it is a topic worth discussing. Here is a very rough breakdown of the Sister Wives‘ history of bankruptcy filings along with the full documents in PDF format:

As far as Robyn goes, there is no record of her ever filing for bankruptcy, but it has been reported that when she married Kody she was $32,000 in debt. There has been no indication that Robyn plans to file for bankruptcy any time soon.

I do not have an answer for the obvious question about how the family was able to purchase four separate houses a few years ago.

Sister Wives: Are Meri and Kody Brown still together?

VIDEO Clip – Sister Wives: The Brown family prepares to “come out” as polygamists