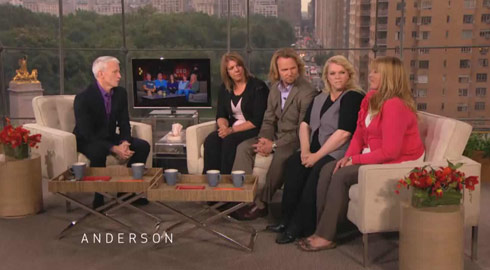 The Brown family of TLC’s Sister Wives made an appearance on Anderson Cooper’s new talk show ANDERSON and were candid and entertaining as usual. Kody and three of his wives, Meri, Jenelle, and Christine sat with Cooper to discuss their lifestyle and a couple of interesting tidbits surfaced during the interview.

During the episode Anderson featured a segment on FLDS, Fundamentalist Church of Jesus Christ of Latter-Day Saints, children who had suffered greatly at the hands of their plural marriage family situations. After seeing the report from Cooper on the FLDS children many of Kody’s kids were shocked by what they saw and heard. Robyn and some of the older Brown children appeared via remote satellite. Mariah, the only child of Kody and his first better-fifth Meri, stated that she wanted to follow in her parent’s footsteps and become part of a plural marriage.

When the FLDS children were shown footage from Sister Wives they had interesting responses in regards to what they saw. One of them commented that he sensed no love between the wives while another stated that their mothers never really got along and that the situation was always tense.

Here’s a clip of Christine explaining that she choose to be in this situation:

Christine offered some heart-felt advice to the children, who shared horror stories of abuse and neglect, that appeared on the show:

Kudos to Cooper for creating an open and interesting environment to discuss plural marriage. It was neither flat out critical of the Browns nor was it just a segment to simply promote their show.