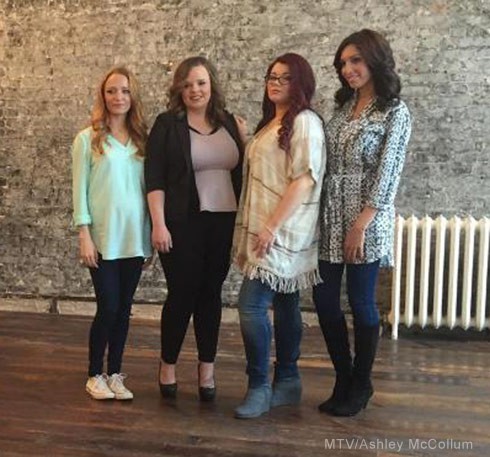 Teen Mom fans will soon be seeing the original cast getting back together on screen as the revamped Teen Mom OG premieres on MTV Monday, March 23. But, before then, we all got a glimpse of the moms (and a few significant others) getting back together in New York City last week to do promotional interviews, photos shoots and who knows what all else! (Reunion Show? Truth or Dare? Book sales comparisons?)

Above is a zoomed-in look at Maci Bookout, Catelynn Lowell, Amber Portwood and Farrah Abraham looking as though they are posing for the new Teen Mom OG official cast photos in front of a brick wall (that I believe the Teen Mom 2 cast used previously). Here is the full shot from MTV:

We're gearing up for a new season of #TeenMom! Watch the trailer now: http://t.co/6WbrLuAGMh pic.twitter.com/291sE9flZG

Although seeing the OGs posing together for MTV once again is pretty amazing, the most momentous photo came from a cast dinner/lunch date in which we see the first ever candid photo of Amber Portwood with her new boyfriend (fiance?) Matt Baier AND Catelynn Lowell and Tyler Baltierra with their daughter Novalee! (Although all you can see is the usual back of her hairy little head.) 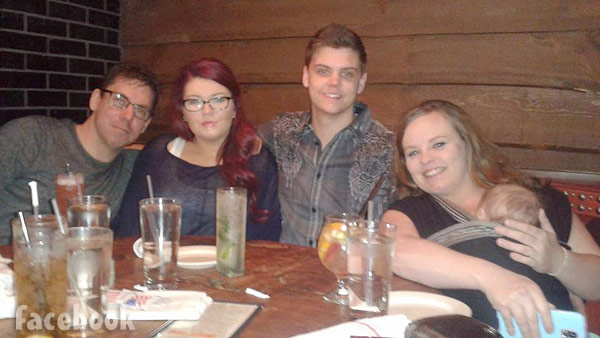 And speaking of Matt Baier, he seemed to make friends fast in The Big Apple, including Farrah Abraham and…. Catlelynn’s mom April!

@F1abraham great getting to know you the last few days Farrah. Travel safe and see you soon! #Goodpeople

Meanwhile, E! News spoke with all the Teen Mom OG moms and shared these photos:

We're with the cast of #TeenMomOG on E! News tonight: Find out what they say about the new season at 7 & 11! pic.twitter.com/d3b5kDzSB1

You can check out one of E! NEws’ videos with Catelynn, Maci and Amber here in which they address the announcement from MTV midseason that Farrah would be returning to the show. Maci seemed to back up reports that she would be leaving after this season and did not allow MTV to continue filming Bentley once the announcement was made as she said “there’s also a fine line with what I find appropriate and I just don’t think it’s appropriate for my 6-year-old son to be involved with some of the things that Farrah is involved with.” Maci succinctly summed up her problem with MTV’s decision. “I feel like my ability to make the right choices as a parent was kind of taken away from me when they decided to bring her back.”

She then shares a hypothetical. “So, you know, if we’re watching one scene and he’s in the front yard throwing baseball and then five seconds later they’re at a strip club, to me, that’s just not appropriate,” Maci says. “And you know, the shows going to air on Mondays and that’s going to be happening and then he has to wake up and go to school the next day with six and seven year olds in Kindergarten that just watched all of that happen.”

Although Maci does not want her son associated with some of the things Farrah Abraham does, Maci wants to make it clear that she has no animosity personally with her co-star. “I don’t hold a grudge against her, I’m not mad at her, I don’t judge her—nothing like that.” And what about her leaving Teen Mom OG after one season? “I can’t really comment on my leaving the show.”

Amber Portwood basically just said that she was shocked when she found out about Farrah’s sex tape while she was in prison, but humbly added, “I can’t really judge much on anything.”

Meanwhile Catelynn, who could be seen laughing with astonishment in the Teen Mom OG preview trailer, said she and Tyler initially were alright with the news, but later began to feel a little more like Maci. “We really sat down [and thought] about it and were like ‘Um, we don’t know how good this is for the moral compass of the show?’ Like, we are trying to educate girls about good things, not so much the sex industry part.”

OK, back to the photos! From here on I’ll just be quiet and post the embeds…

Chatting with the ladies of #TeenMomOG. Are you excited for their return to MTV?

Look who we caught up with in NYC The #TeenMomOG ladies return on March 23, so stay tuned to Wetpaint.com for our exclusive interviews with the girls! #TeenMom #MTV #FarrahAbraham #AmberPortwood #MaciBookout #CatelynnLowell

Watch out for the E news interveiw with me and then with @tylerbaltierramtv about our book conquering chaos avaliabe NOW on amazon.com

It's a new soundtrack I could dance to this beat The lights are so bright But they never blind me Welcome to New York @taylorswift Thanks for a great time in #NYC. So proud of your morals and how hard you work @macideshanebookout… And thanks for loving food and hot chocolate as much as me. #empirestatebuilding #freedomtower #wedonthaveaselfiestick