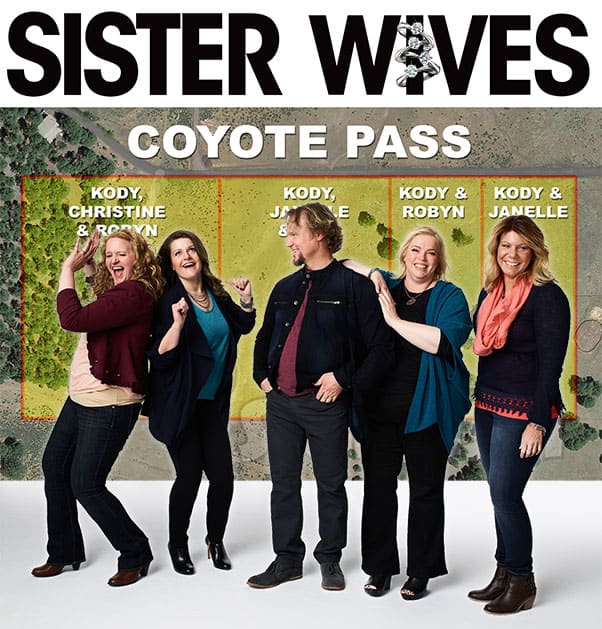 Sister Wives patriarch Kody Brown, his four fives, and their children made the impromptu move from Las Vegas, Nevada to Flagstaff, Arizona in the summer of 2018. The family purchased a large piece of land there with plans to eventually build a single large house for the entire family, or one house for each of the four wives.

As Sister Wives viewers are well aware, the single house idea got nixed. And as Sister Wives viewers are also aware, the plans for the four houses have been completely stalled due to disputes among the spouses about where each of their house would be built on the property. While the building plans are on hold, wives Meri, Janelle, Christine and Robyn have been living in pre-existing homes in Flagstaff — two of which were purchased, and two of which are rentals.

TLC shared a map of the Coyote Pass property during the scene in which Meri waffled back and forth over whether or not she wanted her house near the pond. The map seems to suggest that the property is divided evenly into four rectangles: 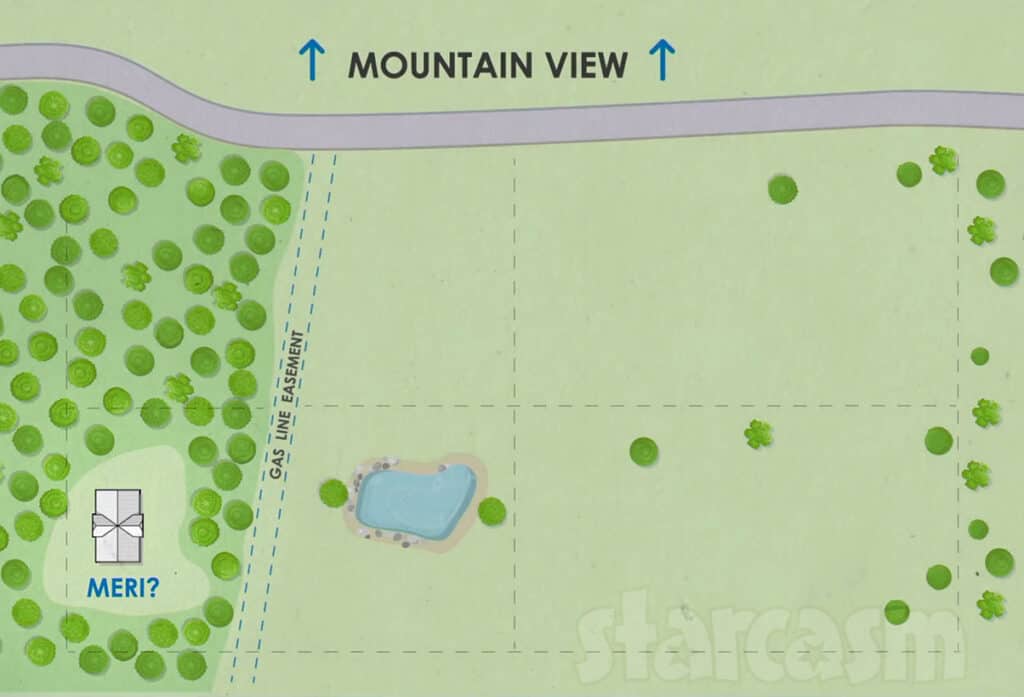 However, the property is actually divided up into four vertical (north to south) rectangular segments. There are two smaller parcels that are 2.42 acres each, and two larger parcels that are 4.48 acres and 5.16 acres. Kody Brown is part owner of all four properties. The two smaller properties each have one of the wives listed as a co-owner, while the two larger properties each have Kody and two of his wives listed as co-owners.

I did a break down of the acreage owned by each wife, and it’s actually a little more uneven than if they had just each picked a single property. (Anyone else bummed that TLC didn’t air the Brown family working out Coyote Pass property math?)

Here is a satellite image of Coyote Pass from Google Maps with an overlay of the actual parcels: 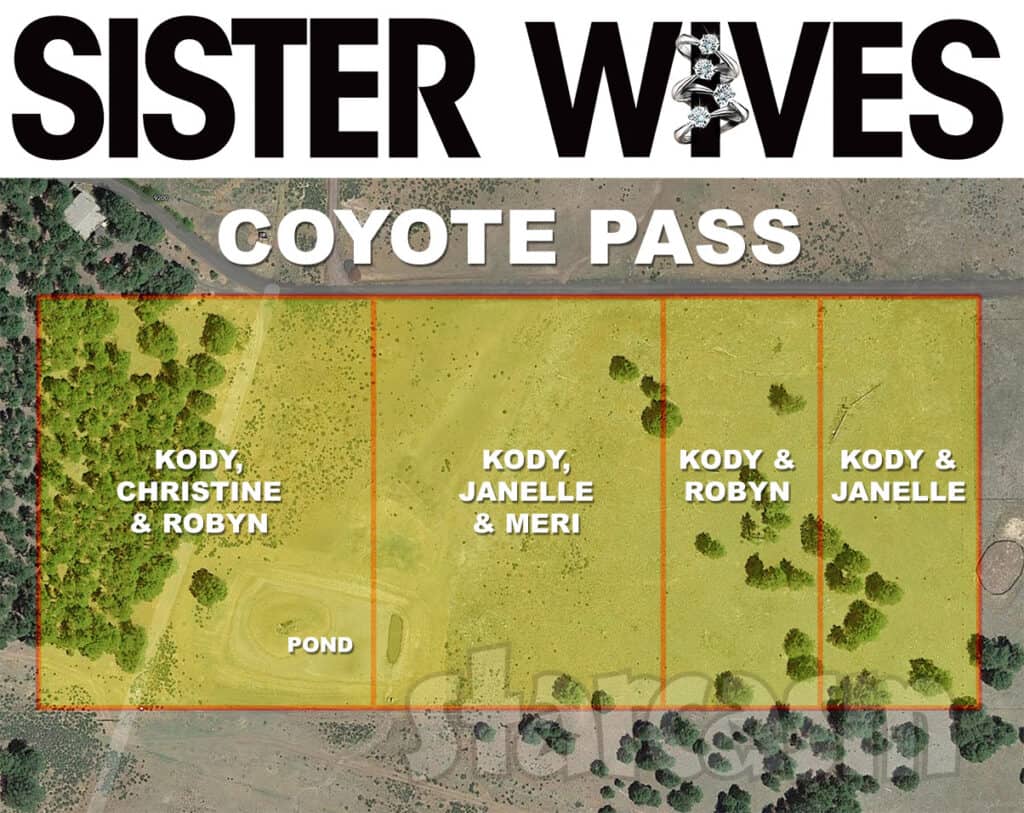 NOTE: According to Google Earth, this satellite image was taken in June of 2017. I tried other satellite imaging sites, but I couldn’t seem to find anything recent.

Here is how each of the parcels break down:

By splitting the acreage of each of the larger properties in half due to being co-owned by two wives, here is the breakdown of how many acres are owned by each of the four wives: 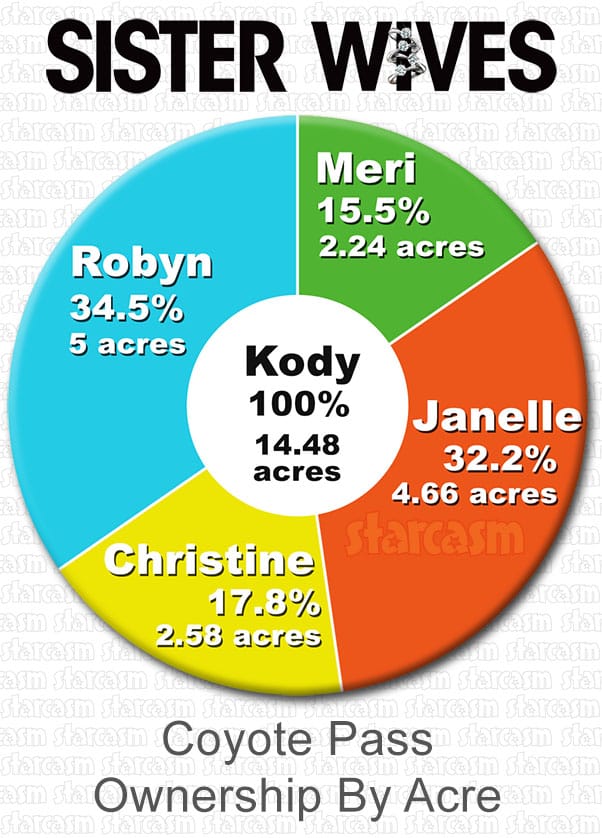 As far as acres go, Meri and Christine definitely got the short end of the stick! But, on a bright side, both of their properties are paid for while Janelle and Robyn share ownership with Kody on two properties with mortgages.

If you’re curious how Coyote Pass breaks down among the wives as far as purchase prices go, here’s the answer (not counting Kody):

That pretty much clears things up as far as Coyote Pass. As a bonus, I thought I would tack on some information about the houses purchased for Robyn and Christine. (Janelle and Meri have been renting their homes.)

Christine’s house was purchased on September 28, 2018 for $520,000. The couple paid $130,000 for a down payment. Kody was also listed as an owner on the initial deed, but he was later removed. From our previous article about Christine booting Kody from the deed:

In August of last year, a title company drew up a warranty deed transferring full ownership of the house to Christine. Kody signed the document on October 30, and it was officially recorded on November 6. I am guessing this will be a big part of the couple’s story next season, especially since there was more than two months between the date that the deed was drawn up and Kody signing it.

Next up in this financial snapshot of the Brown family’s Flagstaff real estate ventures is a very rough summary of their out-of-pocket expenses and debt.

To conclude this post, I have this exclusive glimpse into the future of Coyote Pass!