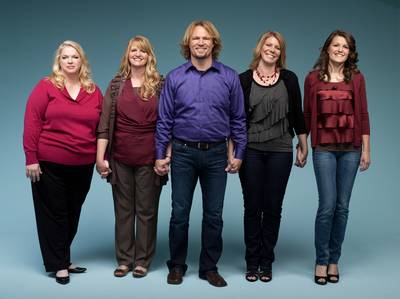 The Brown Family have a reason to relax and celebrate this weekend! Thursday a Utah prosecutor wrote in court filings that criminal charges would not be pursued against Kody Brown and his four wives Meri, Janelle, Christine, and Robyn.

The entire family fled their home in Lehi, Utah January 2011 because they felt threatened by a police investigation that happened as a result of The Browns opening up their lives on national television (there are many people practicing polygamy in Utah, but they are usually not investigated or charged unless there is evidence of abuse.)

A federal judge had previously dropped the state’s case against Koday Brown and family (unless there was evidence of abuse or fraud,) but made it clear that their county (Utah County) could still pursue charges. But now that worry is gone too because Utah County Attorney Jeff Buhman says the county will not pursue any criminal charges for bigamy against the Brown Family unless “there was evidence of a victim or fraud.”

When the Brown Family made their home open to cameras, they did expose themselves for potential prosecution, but they also revealed “normal” lives that looked nothing what the general public envisioned about polygamy. Most polygamous only come to the public consciousness when there are abhorrent cases of child abuse, sexual abuse, and fraud. In cases like the recent Warren Jeffs, the women wear the same hairstyles and long dresses, and everyone seems to have been kept secluded from the rest of the world. The Brown Family are tuned in to the popular culture, dress like everyone else and led normal lives previous tot their coming out. The one thing they couldn’t do was be open about their religion and their marriage situation, basic freedoms that almost everyone else takes for granted.

In fact, the Brown Family have felt some solidarity with gay marriage rights issues, and openly support gay marriage.

As Christine says: “I think we should be able to marry who we love. As a Christian, I believe it is my duty, responsibility and desire to love everybody regardless of their choices. I don’t know how I could raise my children in this world without raising them open-minded and if I want my children to be open-minded, then I have to be open-minded as well.”

It looks like it’s now safe for The Browns to move back home, but since they’ve set up some business opportunities in Las Vegas, will they?

The Browns’ attorney Jonathan Turley made this statement:

“I want to express our great relief for the Brown family that this long-standing threat has been finally lifted. The family has spent years being publicly denounced as felons by prosecutors and had to move to Nevada to protect their family and children.”