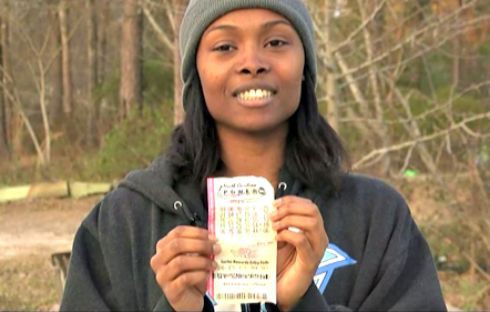 When Marie Holmes won the Powerball lottery last February, she said she planned to spend her new $88 million net fortune on her children, a home, and charity. It turns out her definition of “charity” is a broad one indeed: According to a new report, the single mother of four has spent $9 million to get her fiancé, Lamarr McDow, out of jail.

WWAY TV in Brunswick County, North Carolina (of Jenelle Evans fame) reports Lamarr was busted in November 2014 as part of a lengthy drug investigation. He was charged with multiple crimes, including trafficking heroin and possession of some 8,000 bags with intent to distribute. But, weeks after she won the lottery, Marie allegedly spent $3 million on his bail.

After Lamarr (street name “Hot Sauce”) was released in March, he was required to wear a GPS monitoring device. When he violated that condition last month, police investigated Marie’s home, where they found marijuana and an illegal firearm–both major violations of Lamarr’s probation. Marie was charged with drug possession and Lamarr was taken back to jail. This time, his bail was set at $6 million–and it was posted a short time after his booking.

Although bondsmen don’t confirm who posted payments, Marie seemed to out herself on Facebook:

What Y’all need to be worried about is Y’all money and not how I spend mine this is benefitting Y’all how? And no he’s no drug dealer or user but who are Y’all to judge anybody? I will definitely pray for Y’all because it’s much need…they talked about Jesus so I’m not surprised Y’all are talking about me but be blessed though

Lamarr is awaiting trial. Marie is due in court on September 8th to address her own charge.