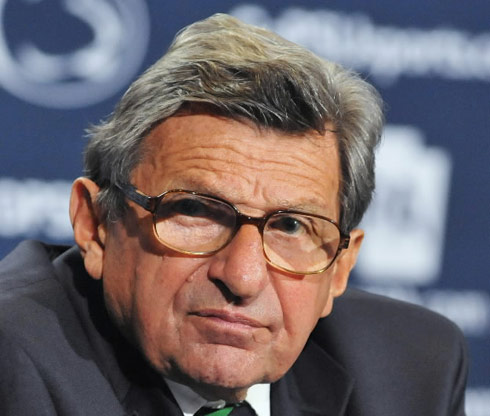 The Board of Trustees at Penn State University went straight to the top by hiring former Director of the F.B.I. Louis Freeh to conduct an independent investigation of the school in the wake of the Jerry Sandusky child molestation scandal.

The results are now in and it’s hard to imagine that they could be anymore damning of late head football coaching legend Joe Paterno and other university heads. The conclusion is that these leaders, “failed to protect against a child sexual predator harming children for over a decade.”

In part the report stated that Paterno, vice president Gary Schultz and athletic director Tim Shurley “repeatedly concealed critical facts” with the intent of protecting the reputation of Penn State.

Jerry Sandusky was recently found guilty of 45 counts of child sexual abuse and while most were expecting an ugly picture to be painted by the report many wondered exactly how condemning it would be of one of the most beloved figures in the history of college football, Joe Paterno. Time will bear out that the findings of this investigation will forever stain the legacy of the man people lovingly called JoePa.

• Paterno failed to take immediate action after Mike McQueary told him about Sandusky raping a boy in the gym shower in Feb. 2001 because Paterno “did not want to interfere with people’s weekend.”

• “At the very least, Mr. Paterno could have alerted the entire football staff, in order to prevent Sandusky from bringing another child into the Lasch Building.”

Here’s a portion of the findings:

Four of the most powerful people at The Pennsylvania State University — President Graham B. Spanier, Senior Vice President-Finance and Business Gary C. Schultz, Athletic Director Timothy M. Curley and Head Football Coach Joseph V. Paterno — failed to protect against a child predator harming children for over a decade. These men concealed Sandusky’s activities from the Board of Trustees, the University community and authorities. They exhibited a striking lack of empathy for Sandusky’s victims by failing to inquire as to their safety and well-being, especially by not attempting to determine the identity of the child who Sandusky assaulted in the Lasch Building in 2001. Further, they exposed this child to additional harm by alerting Sandusky, who was the only one who knew the child’s identity, of what McQueary saw in the shower on the night of February 9, 2001.

This report sadly confirms what many feared; horrible and tragically bad decisions were made by people in positions of great influence and power that furthered the ability of Sandusky to commit his atrocious crimes.