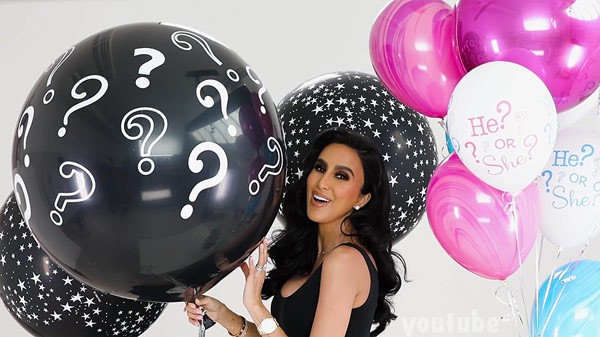 Former Shahs of Sunset star Lilly Ghalichi revealed she was pregnant with her and her husband Dara Mir’s first child back in March, and she has just shared a gender reveal video announcing whether or not she will be welcoming a little Persian Barbie or a little Persian Ken!

The gender reveal video also includes Lilly answering some questions about her pregnancy — including when did they start trying, how long did it take to get pregnant, and how did she tell Dara. More on that in a minute — let’s get right to the gender reveal shall we?

The video should start just before the gender reveal segment at the end, but if not, you can fast forward to roughly the 4:10 mark:

IT’S A GIRL!!! A lil Lilly is on the way! It’s not like I would have been disappointed if it was a boy, but a girl just seems right for Lilly. 🙂

As mentioned above, Lilly also answers some questions about her pregnancy. She reveals that she and Dara began trying to get pregnant in January, and it worked on the very first try! “One try! It was really that easy for us,” Lilly says. “We are so blessed and fortunate because I know for many women it is difficult.” Lilly opens up about being 34 years old at the time and being anxious about whether or not she would be able to conceive.

So how and when did Lilly discover that she was expecting? “I found out I was pregnant while my husband was out of town,” Lilly reveals. Actually, the results of the first pregnancy test she took were a little unclear. Here’s a photo of the test as well as a snippet of Lilly’s text message conversation with Dara about it:

Lilly texted Dara with a photo of the test results above and asked him what he thought it meant. He texted her back and said he thought the test indicated she was indeed pregnant. Lilly later took numerous additional tests, and they all verified that she was expecting. But, Lilly felt bad that she had revealed her pregnancy to Dara via text message, so she didn’t tell him about the additional tests. Instead, she had her completely not pregnant makeup artist Ella pee on some additional tests to get some negative results. Lilly lined those up and took a photo and then texted her husband to tell him that she wasn’t actually pregnant.

“So I’m freaking out for the next three days until he comes home,” Lilly reveals. So how did Lilly reveal that she actually was pregnant? “I put all the positive pregnancy tests in an Amazon package he had got delivered,” she says. “I emptied the package and I put them in there. He opens the package he pulls these out. He’s so confused…and he’s, like: ‘Why did someone send me all these thermometers?'” Lilly points out that they aren’t thermometers and to look more closely. BOOM! “So that’s how I told my husband we were having our first baby.”

Congratulations again to Lilly and Dara! We can’t wait to meet their daughter — and we also can’t wait to see more photos of Lilly’s Instagram maternity fashion show!

I will send you off with some examples of the pregnant Ghalichi Glam:

Date night with my baby ?? #GhalichiGlam

Do you think I'm having a boy or a girl? #GhalichiGlam

Finding jeans is next to impossible when you're pregnant, these @goodamerican "Good Mama" Maternity jeans got me feeling ??I literally bought them in every-single-color #GhalichiGlam

When you're confusing AF from the back, and then you turn around ?? Scroll Left to see the truth! ?Outfit details posted in my featured "Maternity Style" story. #GhalichiGlam

For my Birthday this year, all my wishes came true, because I not only have your Dad, now we both have you ❤️ #GhalichGlam

That awkward stage of- is she pregnant? Or did she eat too many lemons ???‍♀️ ?Outfit details will be posted in my IG story! #GhalichiGlam