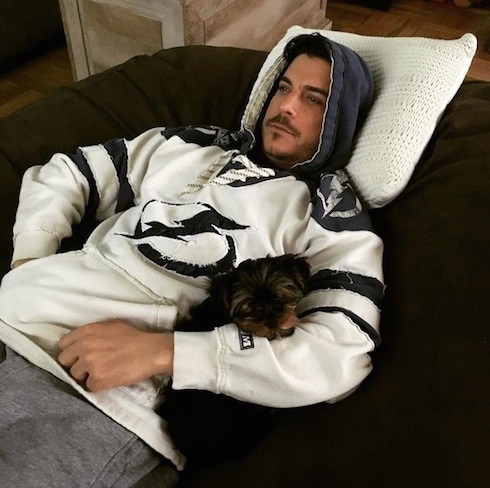 The internet is awash in “Jax Taylor quits” rumors today, thanks to a few eyebrow-raising comments the Vanderpump Rules fixture recently made on Twitter. It’s being said that Taylor, who is perhaps best known for stealing sunglasses while on vacation last summer, is potentially displeased with the amount of attention former girlfriend and #PumpRules co-star Stassi Schroeder has received upon returning to the show.

Jax is no stranger to controversy this week–the “Jax Taylor quits” discussion is the second time in two days that the 36-year-old has seen himself in headlines. Yesterday, he started a miniature Twitter row with Teen Mom star Janelle Evans, claiming he’d never heard of her and insulting her reality television program. Otherwise, Jax spent most of the weekend on the DL, chilling on his couch and watching the NHL All-Star Game–you can see a photograph of the man in action above.

It was the casual manner with which he tossed off the Jax Taylor quits possibility, though, that got people talking. The rumor began during a casual Q&A with fans on Twitter:

Eventually yes we are moving back to Florida, not sure when though. https://t.co/sPVD22cOxb

Those tweets might not read like too much on their own, but #PumpRules devoteés linked today’s “Jax Taylor quits” rumors to what they call the comparatively lackadaisical air Jax has brought to his role so far this season. Eagle-eyed fans also pointed out that ex-girlfriend Stassi Schroeder’s return to Vanderpump Rules certainly isn’t encouraging him to stay.

In fact, Stassi doubled down on her open dislike of Jax in a recent game of “Would You Rather” over on E!. When presented with two unsavory options, one of which had to do with Jax, Stassi made her preferences quite clear: