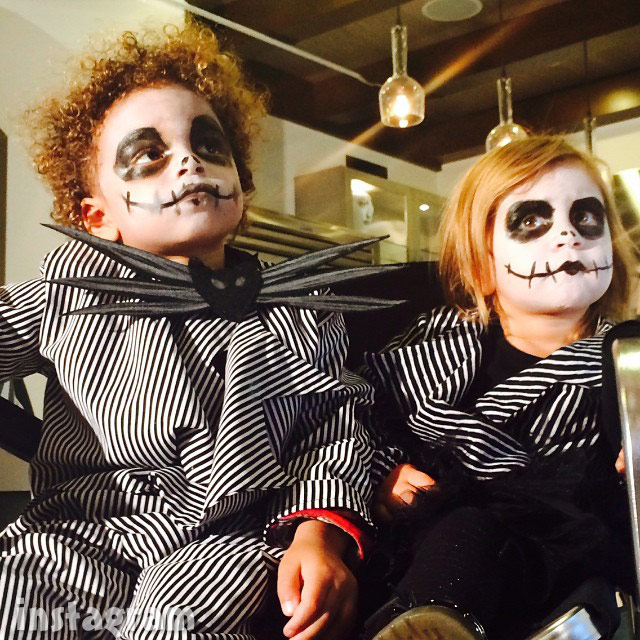 Halloween may have been more than two weeks ago, but old Hallow’s Eve was alive and well for the Kardashian family Saturday afternoon as Kourtney threw a Nightmare Before Christmas themed birthday party for son Mason Disick, who doesn’t actually turn five until December 14.

Mason and his pal along with Aunt Khloe went all out for the Tim Burton bash, but mom Kourtney was a bit more casual — something that didn’t seem to sit well with Khloe. “Kourtney pulled a ‘mean girl’ move on me and had me dress like Sally from The Nightmare Before Christmas while everyone else was mad chill,” Khloe jokingly wrote on instagram along with the photo of her and Kylie Jenner below. She added, “lol thanks @kourtneykardash #MasonsBirthdayBash”

In addition to the costumegery and fantastic makeup by Joyce Bonelli, the Kardashian abode was also decked out in The Nightmare Before Christmas glory, including a towering Jack Skeleton figure and Christmas tree:

'Twas the nightmare before Christmas…

And here are some more photos from the fun bash followed by Kourtney’s “morning after” pajama baby shower at IHOP:

scary-go-round. Mason knows how to throw a good party

Killing it with Jack and Sally Skellington #MASONSBDAYPARTY @khloekardashian @kendalljenner

And here is mom Kourtney at her pajama baby shower the next morning at IHOP.

I have the best friends in the world! Sunday morning 9am IHOP in our pajamas! #fancyBabyShower ☕️

I think my #WCW this week is going to have to be bedhead pajama devil Kourtney!

VIDEO: Kris Jenner cries over not being able to “fix” son Rob Kardashian, Kim is over it