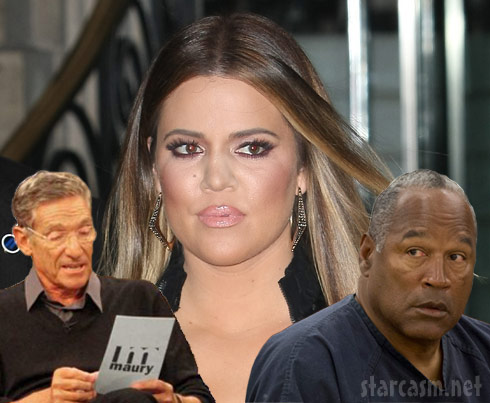 There’s been speculation for years about the identity of the real biological father of Khloe Kardashian. According to a recent article from In Touch, O.J. Simpson’s manager Norman Pardo claims he has a possible answer to this reality TV riddle. O.J.’s manager believes O.J. might be the father! Oh man, not THIS again…

“It’s all going to come out sooner or later,. Khloé could be O.J.’s kid. They all took their vacations together. There was a lot of partying going on back then. Kris cheated on Robert — she was known for having a good time.”

Kris’ late husband Robert Kardashian was part of the defense team that successfully defended Simpson during the murder trial of Nicole Brown-Simpson and Ron Goldman.

So did all of this alleged partying mean that O.J. and Kris hooked up? “Whenever I bring it up, he giggles,” Pardo said of Simpson.

Kris Jenner’s sister, Karen Houghton, told In Touch, “Yes, there are rumors that Kris and O.J. had an affair. And there are rumors that O.J. could be Khloe’s father. I know O.J. was trying to contact Kris from jail.” Adding speculative fuel to the tabloid fire, Star got a quote last week from Jenner’s ex-boyfriend Cesar Sanudo also accusing her of cheating with O.J. Simpson.

As for Kris, she straight up denied the claims. “This is an absolute lie and not true. I have never had an affair with O.J. Simpson.”

Pardo hinted that Simpson might be readying to share his side of the story in regards to his relationship with Kris, with or without the momager’s consent. Before he can do that, Simpson needs to get out of jail for that whole armed robbery and kidnapping situation he’s incarcerated for…

This rumor has popped up before via The National Enquirer and at the time Khloe and the family took turns poking fun at the idea.

E! signs 3-year deal with the Kardashians for reported $40 million

Lamar Odom checks into rehab for drug and alcohol abuse