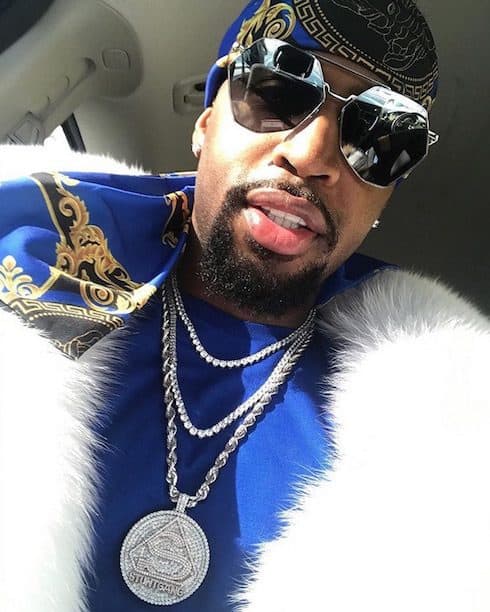 News of Love & Hip Hop New York star Safaree Samuels robbed at gunpoint broke when the man himself shared it in a shaky interview with Angie Martinez immediately following the incident. Shortly thereafter, police engaged in a high-speed chase after the suspects, who allegedly nabbed more than $183,000 in jewels and cash.

Safaree, who has lately been in headlines for more flattering reasons, was clearly shaken when he sat down with Martinez. “I just got robbed at gunpoint,” Safaree told her at the top of his scheduled Power 101.5 interview. “A couple hours ago, I just got robbed…Two dudes with guns, just right up on me. I mean, face down on the floor with a gun to my head. They just took everything.

Here’s the Safaree Samuels robbed interview itself, via Power 101.5:

According to the Fort Lee NJ police department, The three “ordered” Safaree and friend Corey Bryant “to the ground,” then “stole in excess of $183,000 in jewelry and cash before fleeing the area on foot.”

While on their way to the scene of the crime, officers noticed a black Cadillac Escalade without any license plates or headlights “just blocks away from the attempted robbery.” Upon seeing the cruiser, the Escalade “made a sharp U-turn” and tried to flee — and the chase was on:

Not long after two of the suspects were arrested, Safaree took to Twitter to hush haters and fans who appeared to be getting a kick out of the thought of a fur coat-clad Safaree with a gun pressed against his head:

Seeing your life flash b4 you're eyes is a life changing experience. Nothing funny about it. It's probably only funny to ppl who don't have anything or never experienced it. My uncle was killed in a robbery so when thinking about my situation all I think about is him.

I'm not crying over lost jewelry, that's material but being face and not knowing if you're about to get shot in the back of your head is the most traumatic thing I've ever had to deal with.Thank God I'm still alive they want me broken but All they did was make a beast out of me!!

Safaree also refused the criticism that claimed calling the police after being robbed at gunpoint in the middle of the night was shameful snitching:

When you do a crime and get caught 10 mins after you did it that's called karma not snitching. But moving forward to ppl who know and don't know me, don't take offense to my new way of moving. Thank you to everyone who has reached out and sent blessings.

No word yet on whether the $183,000 worth of property has been recovered and returned to Safaree. If filming has begun for Love & Hip Hop New York Season 9, though, it’s likely that later this year we’ll get an up-close look at Safaree’s full reaction to the robbery.