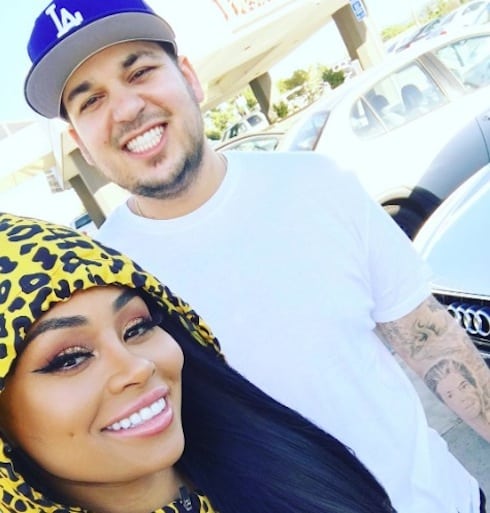 Rob Kardashian and Blac Chyna engaged? The rumors are true! The couple made it official with a pair of unexpected ring shots on social media! They’ve not posed for many pictures together since making their relationship public just a few weeks ago, and Rob is generally pretty slow to update any of his accounts, so at first it might’ve looked like Blac was getting engaged to a pile of money:

But a quick glance at Blac’s Instgram page appeared to confirm the many long-standing rumors–some of which have lasted as long as the relationship itself–about Rob Kardashian and Blac Chyna engaged:

It was only last week that the most recent wave of marriage rumors began, fueled by speculation over Blac Chyna angling for a lucrative guest starring spot on Keeping Up With The Kardashians. At the time, Kris Jenner kept things civil, allowing that “[Blac] seems like a nice girl, but I just haven’t been around her.”

It was only a month earlier that Rob made what, at the time, looked like a somewhat unserious break with his family, claiming on social media that Blac’s “good p*ssy” was worth the decision to risk acrimony. And Rob and Blac’s Valentine’s trip to Trinidad led many onlookers to believe that reports of a “Miley-sized wedding” were going forward in secret (though, isn’t part of the point of a huge wedding that you’re being very public about it?).

So far, none of the Kardashian-Jenner clan have officially welcomed Blac to the fold–so it looks like we have plenty of Kardashian wedding gossip to look forward to in the very near future!

And congrats to the couple!

Kylie Jenner and Tyga drama: Did he cheat with Blac Chyna while trying to get back with Kylie?