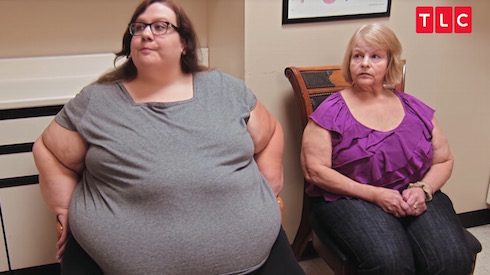 The My 600 Lb Life Lacey episode features a Michigan woman whose body is a “ticking time bomb” — and whose parents’ fractured relationship may be shorting the clock. 29-year-old Michigander Lacey Hodder has been plagued by weight issues for years, but it looks like her first visit with Dr. Nowzaradan may be the first time she’s had to confront them and her family problems at the same time.

Lacey’s arduous, 1,400-mile trek to Houston from her native Bay City MI is just the start of her weight loss journey. However, according to the episode preview from TLC, Lacey’s confrontation of her obesity has been years in the making:

Lacey ballooned up to over 600 pounds on pizza and ice cream and knows Dr. Now is her best hope for success. She must now rally her divorced parents around her for support and find a way to modulate her moods that won’t include binge eating.

Based on the first sneak peek at the My 600 Lb Life Lacey episode, it looks like there’s a lot of unspoken tension in her relationship with her mother as well. Lacey’s mom — who’s also been struggling to lose weight — makes the journey to Houston with her daughter, and accompanies Lacey for her first visit with Dr. Now.

Lacey’s peak weight of 653 pounds concerns Dr. Now, and he gives Lacey his “1,200-calorie-a-day, high-protein, low-carb diet,” telling her Lacey to begin the diet “immediately.” He also tells her to cut out snacks, and walk for an hour a day: 30 minutes each in the morning and the evening. If Lacey follows his orders, she should have “no problem” losing at least 80 pounds before her next check-in and getting weight loss surgery approval.

None of those requirements faze Lacey, who responds “Yes, sir” several times and nods seriously whenever Dr. Now looks at her. But, as the first preview clip for the My 600 Lb Life Lacey episode makes clear, it’s only Dr. Now’s final suggestion that gives Lacey pause.

Here’s the clip, via Monsters and Critics:

“You need to move to Houston for awhile, and you need someone with you to help you,” Dr. Now tells Lacey. “So, is that going to be a problem?”

“No,” responds Lacey, adding that her mother will be the one to make the move.

“Are you any help for [Lacey]?” Dr. Now says to Lacey’s mom. “Because you haven’t been very successful with your own weight loss. So I’m skeptical that you will be any help with her.”

“She does what she wants, Doctor,” Lacey’s mother says, resignedly. Lacey’s mom confirms that she doesn’t enable any of her daughter’s bad eating habits — but that the two also don’t live together. Lacey and her mom don’t look at each other during the exchange, and Dr. Now says that if Lacey’s mom can’t model good behavior for her daughter, he’ll have to start doing weigh-ins for both women.

“There’s no margin of error here, or any time to waste,” Dr. Now tells both women. To Lacey, he adds, “Your body is a ticking clock right now, and it’s gonna go off any minute.”

We’ll have to wait for Lacey’s full episode to see how her time with Dr. Now went. But we can confirm that, according to Lacey’s social media profiles, she still lives in Houston, meaning Dr. Now is almost certainly still treating her. As we’ve explained in several cast member follow-ups recently, show participants who still live in the greater Houston area tend to have a higher weight loss success rate than those who move back home after their first year.

My 600 Lb Life Season 7 continues Wednesday nights at 8 on TLC.

Jessica Alba wore corsets 24/7 to tone after pregnancy, but does that really help?

Does liposuction really work? And how dangerous is it really?