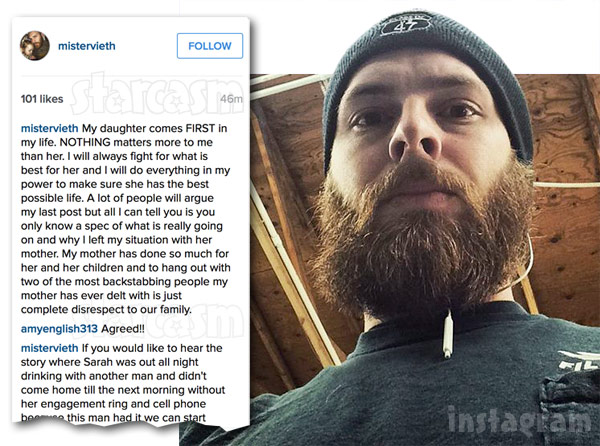 The Real Housewives of Orange County star Tamra Judge’s son Ryan Vieth and his estranged fiancée Sarah Rodriguez continue to have a roller coaster break up, as Ryan breaks the peace yet again with another attack on Instagram.

It all started when Ryan posted a photo of Sarah celebrating party planner Emily Simpson’s 40th birthday with Tamra’s RHOC nemeses Gretchen Rossi and Lizzie Rovsek. Here’s the photo, which Ryan captioned, “Wow I guess Sarah will get her 15 mins one way or another. Smh.” 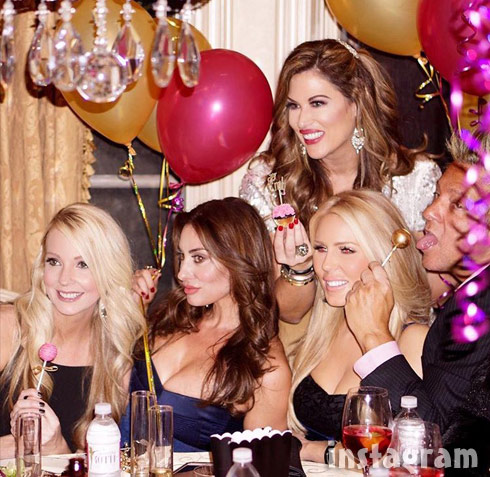 After that post, Ryan shared a photo of a lion with a cross over it that included the text: “The devil whispers, ‘You cannot withstand the storm.’ The warrior replies, ‘I AM the storm!'” Ryan added this explanation of his motivation for the previous picture and comment:

My daughter comes FIRST in my life. NOTHING matters more to me than her. I will always fight for what is best for her and I will do everything in my power to make sure she has the best possible life. A lot of people will argue my last post but all I can tell you is you only know a spec of what is really going on and why I left my situation with her mother. My mother has done so much for her and her children and to hang out with two of the most backstabbing people my mother has ever delt with is just complete disrespect to our family.

He followed that up by insinuating Sarah cheated on him at one point:

If you would like to hear the story where Sarah was out all night drinking with another man and didn’t come home till the next morning without her engagement ring and cell phone because this man had it we can start there. To say that I stuck around as long as possible for my daughter is a understatement.

For the past year I’ve had to deal with her threats of taking my daughter away to Northern California. I’m mentally drained but happy now that I have joint physical and legal custody of Ava. She has managed to have 3 other daughters with 3 different fathers and they have never been in the children’s life but that will not happen to me.

One commenter asked, “Why does she still have pictures of her wearing the ring?” Ryan answered with: “Beats me. She refuses to give the ring back. I only assume she’s going to sell it when she really needs money.”

SARAH: First off let me start by saying. FAMILY IS EVERYTHING. Whether blood or not. I cherish my family!! I have been getting deeply criticized for actions that accord last night and being accused of not being loyal. Well just because I was in the room with certain people or in pictures with certain people DOES NOT make me a disloyal person. I simply went to friends bday party last night to celebrate her turning 40 and boy did I have fun!! She was my first friend in Orange County when I moved here and I wasn’t going to miss it. However I am now being judged. Tamra is a very very special person to me. Not only is she my mother in law. She is one of my best friends and she has been the best grandma to ALL of my girls. Through the good and through the bad. I value her. Ryan is the best dad I could have ever asked for my daughter which I would never ever come between. They are my family and regardless of the situation they are who I am loyal to. #familyfirst

COMMENTER: You should really keep the family drama off of IG, social media was not meant for it. Your both grown adults and should know better. Keep your very personal business private. ?

SARAH: well when it’s out there anyways and I am being judged by people who don’t even know me then I am going to defend my family.

COMMENTER: Don’t let it break your heart babe. You’ve done nothing wrong [Sarah] I support you

SARAH: We both did things wrong.