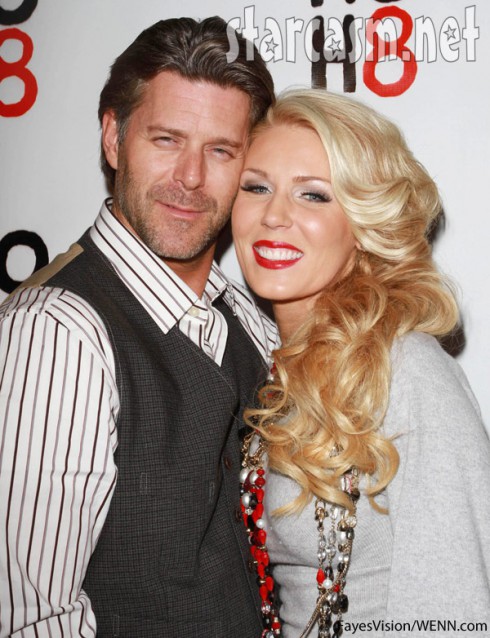 The reality show relationship of Real Housewives of Orange County’s Slade Smiley and Gretchen Rossi may make it to the engagement stage.

It’s been rumored for months that Slade proposed to Gretchen during the current season’s finale party. It makes for a neat conclusion to Gretchen’s storyline of deciding whether or not she’s ready for marriage with the unemployed Slade (who lost his driver’s license over $138,857.64 of unpaid child support for his son Grayson Arroyo, who is suffering from a rare brain tumor.) UPDATE June 9, 2011: The finale has aired sans an engagement for Gretchen and Slade. Gretchen has increasingly shown that she is extremely wary about marrying Slade because of his financial and legal problems. She even went as far to say during one of her interviews that if Slade can’t get his finances sorted out, it’s time to move on.

Gretchen may have found her prince charming, but Slade has found himself a sugar mama. 2009 court documents have revealed some interesting information about Slade’s financial information. Slade filed these as evidence of his ‘destitution”, and to to ask that his child support payments be lowered, prevent collectors from going after him, and have his driver’s license be released.

Here’s a list (via DBKP) of things Slade claimed to be true about his financial situation in the 2009 documents:

-his home was surrendered to the bank in March of 2008,
-on 5/16/2008, Slade was fired from Land America,
-In June, 2008 Slade had a new job in a tv series (Slade and Jo: Date My Ex)
-On June 10, 2008 the IRS gave notice to Slade he owed $104,000 in unpaid taxes. The IRS began garnishing his wages leaving him with $172 a week.
-In August 2008 Slade was employed by Union Security Title as a commission only sales rep,
-Slade was fired by Union Security on 10/8/2008, due to the real estate market collapse,
-Slade’s bank account was closed March 2009.
-Slade hasn’t had income for the past 13 months (this period includes season five of Real Housewives when Slade lived with Gretchen and, when Slade may ask Gretchen to marry him)
-Slade was borrowing money from family until they “could not lend him any more”
-Slade was forced to “surrender” his car in April 2009
-Slade is “currently living with a friend” (Friend, meaning Gretchen Rossi)
-The IRS levy has made it impossible for Slade to meet his child support obligations,
-Slade is both “indigent” and “destitute”

Slade has recently been ordered by a judge to seek employment outside of the ‘entertainment/TV and title industries’ because though are the two industries he has unsuccessfully been trying to find work in over the last two-three years.

As most RH fans know, Gretchen isn’t the first Real Housewife that Slade has dated. When Slade first appeared on the very first season of Real Housewives of Orange County, Slade was engaged to the younger Jo de la Rosa, and appearing to be making bank in the title industry. On the first season Slade was keeping his then five-year-old song Grayson and his then-fourteen-year-old son. Between the first and second seasons the boys disappeared when they learned Grayson had a rare form of brain cancer, Fibrillary Astrocytoma. Jo and Slade also briefly broke up in the interim, and Slade reportedly hooked up with another housewife, Lauri Waring. Jo and Slade got back together, then broke up, then they both moved to L.A. to launch Jo’s currently nonexistent singing career (oddly enough, Gretchen bought the rights to Jo’s catalog of music.) (CLICK here to watch the first season of Orange County on demand.)

While Slade may be homeless and broke, Gretchen has the Housewives gig, and has followed in the footsteps of other Real Housewives by developing her own makeup line, her own handbag line, and a skincare line.

If they are actually gettin’ hitched, Gretchen might want to ask Atlanta House Pheadra Parks to help her draw up a prenup. A businesswoman has got to look out for herself!

How many Real Housewives has Slade Smiley dated?