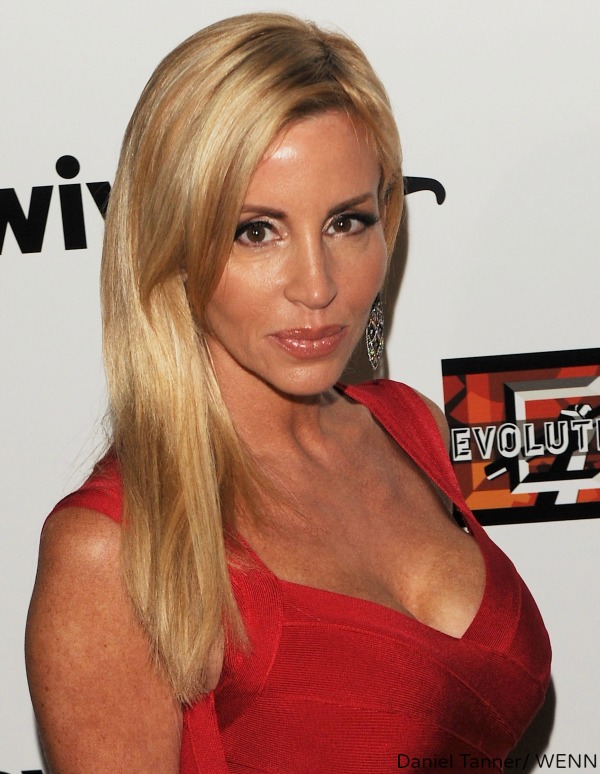 Welcome to Part 2 of our look into The Real Housewives of Beverly Hills star Camille Donatacci Grammer’s extensive history with Playboy magazine! In Part 1, we saw Camille showing her love for New York City, striped upholstery, wall mirrors, and the art of film in 1995-1997 issues of Playboy’s Book of Lingerie, Nudes and College Girls.

Playboy readers must have really liked what they saw of the future former Mrs. Kelsey Grammer because Camille was promoted to cover girl for the January/February 1997 Readers’ Choice Supermodels – Playboy’s Book of Lingerie, joining five other pretty-in-pink-pantied models in what looks like a promo shot for Bravo’s new Real Housewives of Hugh Hefner reality series! (If you click the link and check out the magazine cover on Amazon, that’s Camille on the right.)

UPDATE – Due to concerns from our advertisers, all of the original images in this post have been removed. It still serves as a guide to Camille’s appearances in the magazines.

The same cover shoot yielded three other Camille pictures, including this one on the back cover with Camille almost flashing her full left Beverly Hill:

As far as the interior shots, it was yet another Big Apple themed shoot with Camille showing off her patriotic side by sort of wearing an American flag inspired bikini while taking a boat trip to the Statue of Liberty:

Inside the front and back covers are some not-safe-for-shelf images of all of the gals together:

Be sure to head over to Playboy.com and sign up so you won’t miss out on the reality stars of tomorrow! As a matter of fact, go old school and get one of those subscriptions your dad is always talking about!

Ah what the heck, why don’t you REALLY bite the bullet and go buy Playboy Cover to Cover, a 250 gigabyte external hard drive featuring every page of every issue of Playboy magazine from 1953-2010!

Did Joanna Krupa cause Yolanda Foster’s divorce from Mohamed Hadid?