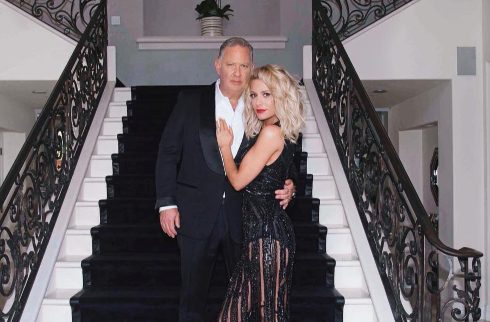 The Real Housewives of Beverly Hills stars Dorit and her husband P.K. may live in a multi-million dollar mansion, drive cars worth more than the average American’s home, and throw over-the-top yacht parties, but the truth is, the pair are struggling to get out of millions of dollars worth of debt.

Last month it was discovered that P.K. is in massive debt to the famed Las Vegas hotel, the Bellagio. The casino granted him a marker (also known as an IOU) in 2009 for $3.6 million.

An agreement was made in which P.K. would be responsible for paying off his debt through June of 2018, but the casino says he stopped making payments early and left a balance on the table.

Court documents, obtained by The Blast, show that a judge granted the casino’s plea and a “garnishment and execution” was put in place. This means the casino can come after PK’s income and/or assets.

THIS STIPULATED JUDGMENT (Case No. 2:13-cv-01974-RFB-VCF), CONSISTING OF A TOTAL OF FOUR (4) PAGES, INCLUDING THIS SIGNATURE PAGE, IS SO ENTERED AS A JUDGMENT OF THIS COURT, AND FOR ALL SUCH JUDGMENT AMOUNTS STATED THEREIN LET GARNISHMENT AND EXECUTION ISSUE FORTHWITH.

In addition to P.K.’s gambling trouble, Dorit was recently slapped with a lawsuit regarding her swimwear line.

According to TMZ, Dorit and P.K. worked with an investor to launch Beverly Beach. Ryan Horne claims he fronted the couple $200,000 for a third of the business but never saw a penny in return. He filed legal documents against Dorit and P.K. in an effort to get his money back plus a share of the profits.

These legal troubles are hitting the Kemsley’s during filming for the next season of the Real Housewives of Beverly Hills. No telling if any of this legal drama will make it into Dorit’s storyline.