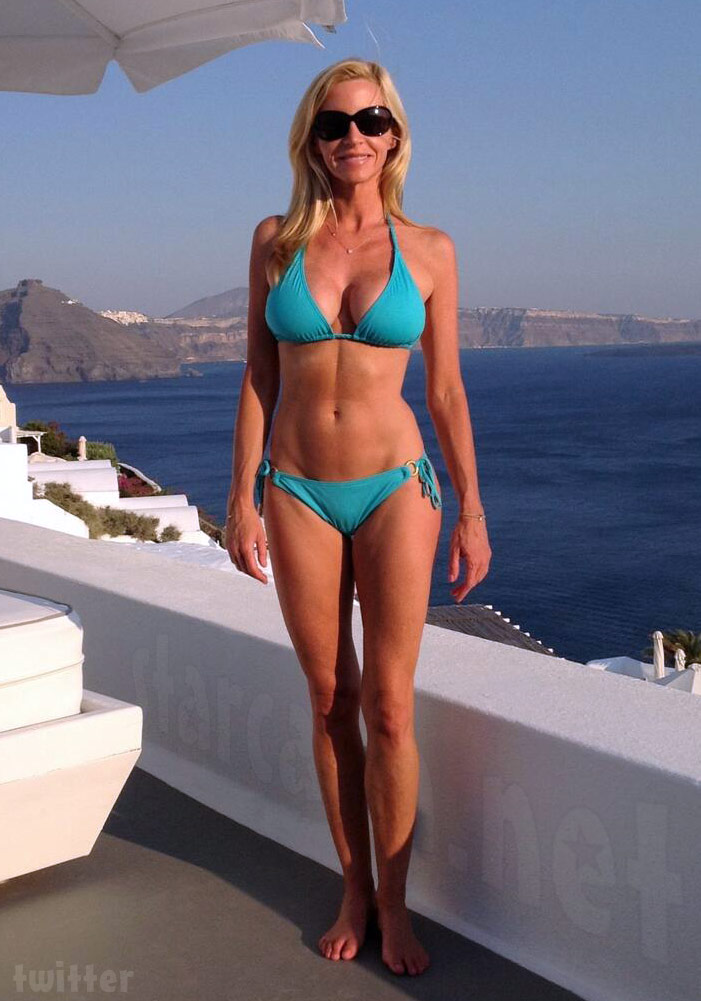 As mentioned numerous times on The Real Housewives of Beverly Hills, America’s favorite least favorite housewife Camille Donatacci Grammer has graced the pages of various Playboy magazine publications over the years. In honor of The National Enquirer‘s announcement that Hurricane Camille would be back for a second season of the popular reality series, I’ve compiled a fairly comprehensive guide to her Playboy print appearances!

Actually, it’s not really all that comprehensive at all because Camille pretty much made a full-time job out of baring her chest and Donahootchie for the bunny empire in the mid ’90s. But, with the information I do have, combined with the added help from those diligent Playboyologists that are bound to be out there, I’m sure we can grow this post into the world’s only source for all things nekkid Camille! (In print at least — her appearances in softcore adult films is a whole other post entirely.)

UPDATE – Part 2 is complete featuring Camille’s appearance inside AND ON THE COVER OF the January/February 1997 Readers’ Choice Supermodels – Playboy’s Book of Lingerie!

UPDATE – Due to concerns from our advertisers, all of the original images in this post have been removed. It still serves as a guide to Camille’s appearances in the magazines.

Before we get started, here’s Camille having a very romantic evening during which she allows a pane of glass to get to second base. (From an as-yet-unidentified Playboy photo shoot. Click photo for the smashed Donatacceroni.)

The first instance of Camille sharing her Giggy via Hef, Inc. was in November/December of 1995 when she appeared in both Playboy’s Nudes and Playboy’s Book of Lingerie. ()

In the Playboy’s Lingerie November/December 1995 issue, Camille has a two-page spread featuring photos of her in a thong on a blue-striped love seat. As an added “arty” element the pictures are actually her reflection in a series of framed mirrors. It’s a pretty conservative start in that she only reveals three nipples (not at the same time).

And here’s an outtake photo from the shoot not included in the magazine – you can click on it for a super-sized uncensored version with Camille’s Donatatas in all their glory:

As you might expect, Camille Donatacci got a bit more risque for her spread in the November/December 1995 issue of Playboy’s Nudes. And speaking of “her spread,” Camille shows us what years of dancing can do for a woman’s flexibility as she expresses her love for New York in much he same way she probably expressed her love for Kelsey Grammer – with a hand-written note of course. What did you think I meant?

All of the models in the book are listed in the back with a little description and Camille’s reads:

The 1995 Playboy’s Nudes photo shoot marks the first of many times the New York City motif shows up in Camille’s Playboy oeuvre. The second instance was Camille’s apparent return to further her post-secondary education in 1996 when she appeared in Playboy’s College Girls as a representative of New York University at the age of 31.

For this two-page spread Camille looks to be the star of a new series called Taxi Crabs Confessions as she hails a cab driven by Larry King, who she appears to flash in lieu of fare. On the opposite page Camille looks to be REALLY enjoying some television just prior to making sweet, sweet love to a remote. Those crazy college girls!

Here’s the description of Coed Camille:

As a diehard rock-and-roll fan, Camille would like to put her training in film to good use as director of music videos. She also likes to paint, write poetry and go to the movies and off-Broadway plays. If you have ugly feet, a hairy back or a bad attitude you need not inquire about a date. But if you’re sensitive, creative, have soft lips and a nice smile you’d at least stand a chance.

How ’bout that?!? Aside from the hairy back thing, Kelsey Grammer seems like he was a perfect fit! It even enabled Camille to go from attending off-Broadway plays to attending on-Broadway plays, even if being backstage with her husband is a little awkward. Oh — and $5 to the first person that can get us a verifiable example of Camille Grammer’s poetry!

Be sure to check back with us – I’ll be making at least one more Camille Donatacci Grammer in Playboy photos post! Until then here are a couple more pictures of Whammy-Bammy-Thank-You-Cammy from unidentified Playboy publications with links to the full Montied versions followed by the cover images for the magazines talked about above!

First up is Camille showing off her junk in the trunk while under the hood of a brand new Mazda Miata:

Next up Camille Donatacci Grammer shows New York City both of her beavers:

Be sure to head over to Playboy.com and sign up so you won’t miss out on the reality stars of tomorrow! As a matter of fact, go old school and get one of those subscriptions your dad is always talking about!

Ah what the heck, why don’t you REALLY bite the bullet and go buy Playboy Cover to Cover, a 250 gigabyte external hard drive featuring every page of every issue of Playboy magazine from 1953-2010!