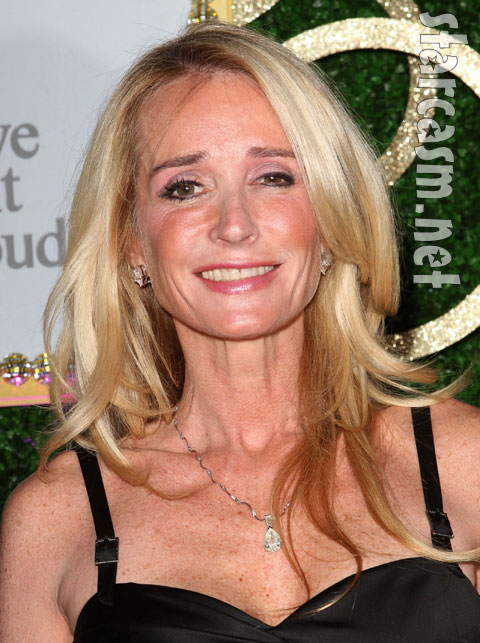 Everyone remembers the shocking moment when Kim Richards’ own sister accused her of being an alcoholic during the season finale of the Real Housewives of Beverly Hills. Then, after they wrapped filming, Kim went to rehab, but checked herself out after a week.

But when the new season started filming again, Kim seemed more out of it than ever. She misses many of the pre-arranged Housewives engagements, and when she’s there, she’s late and appears intoxicated. Sometimes she slurs her words, appears more animated than normal, and during the infamous “game night,” she went to the bathroom numerous times; leading Brandi Glanville to accuse her of being on meth. She’s also been cagey with her sister Kyle about the details of an impending move, which turned out to be her trepidation about introducing sister Kyle to her new boyfriend Ken.

On Monday night’s episode of RHoBH, Kim revealed to plastic surgeon Dr. Paul Nassif during one of his “Paul’s Night of Beauty” non-invasive beauty procedure parties, that she was on three different psychiatric medications. Paul, who has previously expressed exasperation on camera for Kim’s behavior, saying she “must be on something,” finally had an explanation for what he was observing.

“I’m glad you told me this because now it all makes sense. Especially with you mixing with the other medications, it’s gonna make you slur the words a little bit, it’s gonna make you out of it a little bit. I’ve had patients come in that have been on two or three of these combined, and I thought they were drunk . . . you have that sedated look on you right now.”

When questioned further, Kim said she hadn’t had any alcohol in a long time. Even though Paul was concerned that Kim’s particular cocktail of drugs wasn’t good for her, he thought it wouldn’t interfere with her procedure that day, and still injected her lips with a little filler.

In interview Kim even addressed her rumored problems with alcohol for the first time: “I am afraid that people think I’m drinking, and I hope that I can stay not drinking because I like the way that I feel when I don’t.”

Kim also mentioned suffering from severe anxiety issues when she was at Game Night, telling Kyle she hadn’t slept or eaten in three days. Alcohol is often used to self-treat anxiety disorders, so it’s possible that any problems she has with alcohol are really rooted in severe anxiety problems.

Kim’s prescription medications, however, seemed to causing her some trouble as well.

What medications was she on, and what do they do?

Topamax: An anti-seizure medication also used to manage alcohol dependence, depression, mania, and PTSD (post traumatic stress disorder.) Side effects can include: Numbness and tingling, fatigue, taste change, weight loss, difficulty concentrating, and difficulty with memory (which can explain Kim’s confusion on the phone with Adrienne Maloof during one episode.)

Hopefully Kim is tweaking her medication, which can be a complicated and long process, and doing whatever she needs to do to find happiness, because she deserves it! We’re also glad she decided to stay on Real Housewives after what was a probably a very painful time, both publicly, and with her family last year.
Drug info from Drugs.com and PubMEdHealth.

UPDATE: Kim Richards entered a 30-day rehab program December 2011. She successfully completely the program, and during a January 2012 interview with Andy Cohen, admitted that she’s an alcoholic.

Is Yolanda Foster faking her Lyme disease on Instagram?