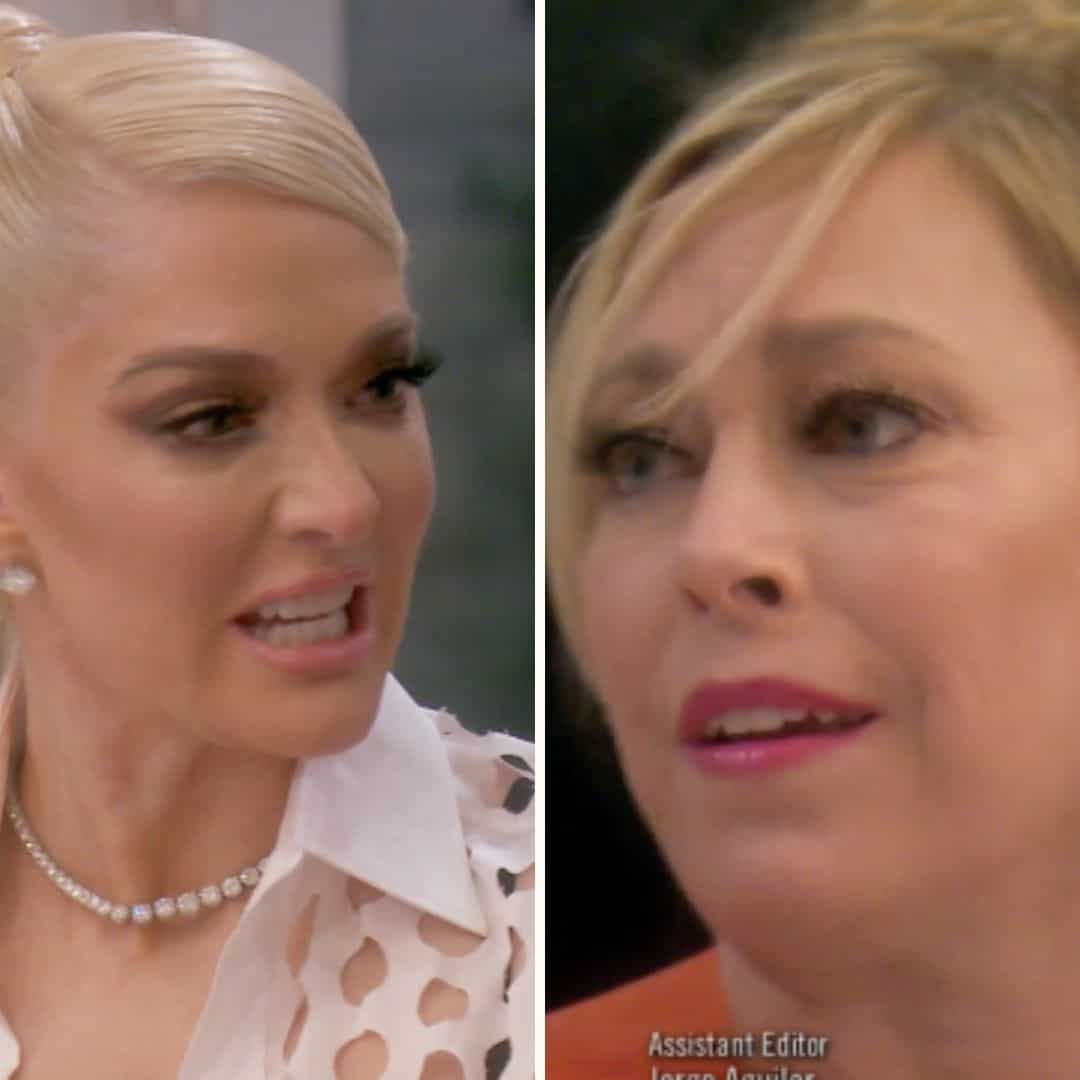 At the beginning of Episode 15 “Threats and Promises” the women are still at Kathy’s fancy white glove dinner with caviar pie and duck. Sutton has just confronted Erika about the fact that she thinks Erika lied about Tom’s car accident. Erika has given conflicting stories about what happened to Tom, and has most recently revealed that he suffered brain trauma from the accident that she says affected his personality in a profound way.

“Would you like to get sued?” she asks Sutton at the start of the episode as she snaps her head around like a striking viper.

Kyle points out that this type of legal threat gives validation to Sutton’s suspicions and worries. Sutton has another reason to be cautious and questioning of Erika: she almost loaned her money when she first learned about Erika’s divorce.

“Not by me,” Erika says, saving face. “If you want to talk about someone else’s health issues, and you think that that person isn’t gonna come after you? Think again.”

In the talking head interview Erika says that Sutton’s “in way over her head. It’s not about me suing her, it’s about ‘careful what you say about other people.”

Dorit tells Erika that it sounds like a threat to not just Sutton, but everyone who might have questions about her situation.

Erika, who was crying just a few minutes ago, says “I’m about to lose my shit on all of you.”

Kathy Hilton, the host, asks Erika to “calm now,” and she looks down while gritting her teeth.

Lisa Rinna and Garcelle then lead Erika through a breathing exercise. Once she’s taken a long, quiet breath, she turns again to Sutton and says “If you ever call me a liar again, I’m coming for you” which reveals that the threat wasn’t about “someone else” coming after Sutton, but Erika herself.

In the above aftershow Sutton reveals Erika whispered something to her “that was even worse” during her targeted attack on her that she refuses to repeat. Sutton says that she’s shocked that Erika was so angry and came after her so fiercely.

Sutton believes she’s valid in asking questions based on what she read in the L.A. Times article that exposed the depth of what Erika and Tom are entangled with.

Kathy and Kyle didn’t take Erika’s threat “literally,” but Sutton believes that Erika’s threats seem “real and scary.” However, she’s no longer afraid of Erika’s threat. For a minute, though, Sutton was so shaken she thought about leaving the Real Housewives of Beverly Hills for good.

She didn’t think it was worth the risk for a minute, but she says she ended up staying because of Garcelle’s support of her. She also feels more vindicated because more has come out and more lawsuits have come out to prove that she was “right” in realizing how serious all this way. She also didn’t want to be “bullied” out of the series with threats.

PHOTOS: Is Jim Carrey mourning his loss of Jenny McCarthy with art therapy?

VIDEO Shakira gets finger jacked during a performance in Mexico?