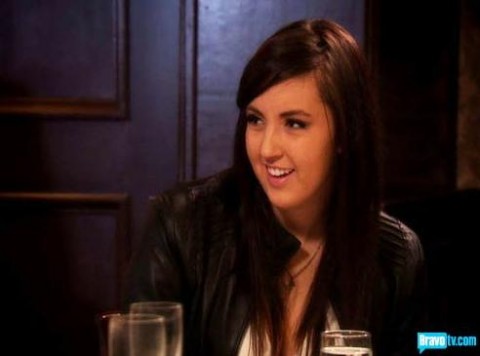 After really a really slow start, The Real Housewives of New Jersey is finally starting to gain a really weird kind of momentum. Danielle no longer goes anywhere without  the “protection” of her new wise-guy BFF Danny Provenzano (esp. when arriving to cancer benefits for sick babies), Jacqueline Laurita’s 19-year-old daughter fights for some air-time with her infantile Facebook attacks on Danielle, Dina finally left the sanctuary of her Energist-blessed Zen cocoon to confront Danielle (complete with a very film-noir night-driving shot of Dina).

Back to Jacqueline’s daughter, Ashlee Holmes, who decided to walk in Auntie Caroline’s shoes and “protect” the family, but instead of making power plays at the dinner table, she allegedly spent six months setting up “I hate Danielle Staub” Facebook groups and sending Danielle vile-filled, overly dramatic text messages:

Since they’re both 8-year-olds at heart, Danielle and Ashlee flamed each other for months before the time was right to air their drama via national television.

All the drama comes to a head in upcoming episodes when Danny fails to prevent Ashlee from yanking at Danielle’s weave.