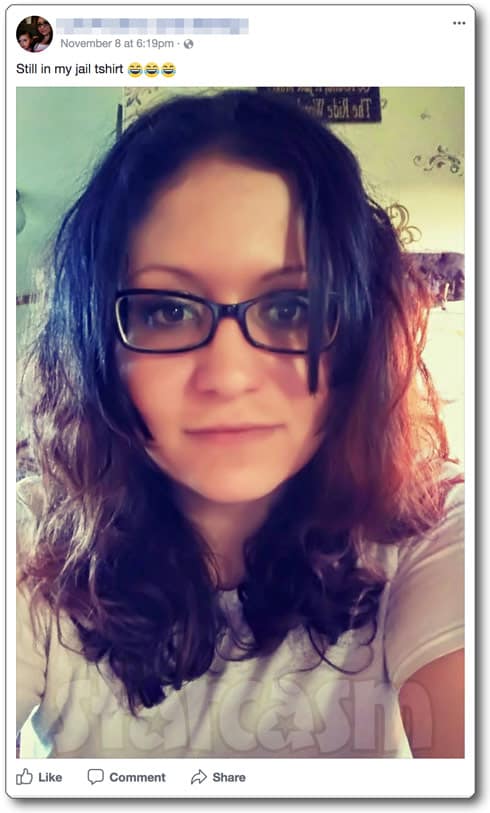 The last time we checked in on Return To Amish star Sabrina Burkholder she was back behind bars for drug charges after being booked on August 24. We can reveal that the 31-year-old reality star was released early this month, and also that her two daughters — 3-year-old Oakley and nearly 1-year-old Arianna — have officially been adopted by their dad’s sister!

The father of both of Sabrina’s daughters is Harry Kreiser, who had a rather tumultuous on-again, off-again relationship with Sabrina that included at least one extremely violent incident. It was Harry’s sister who adopted both Oakley and Arianna, although Arianna may not be Arianna any more. “Apparently Ari is now Olivia,” Sabrina said on Facebook just a couple days after being released.

The new family posted photos with Oakley and Olivia in court late last week, soon after the adoption was made official, but I’ve chosen not to include them here. It’s unclear at this point whether or not Sabrina will be allowed to see her daughters, and if she is, how often. We have heard reports that she will be allowed visitation, but those reports are unconfirmed. 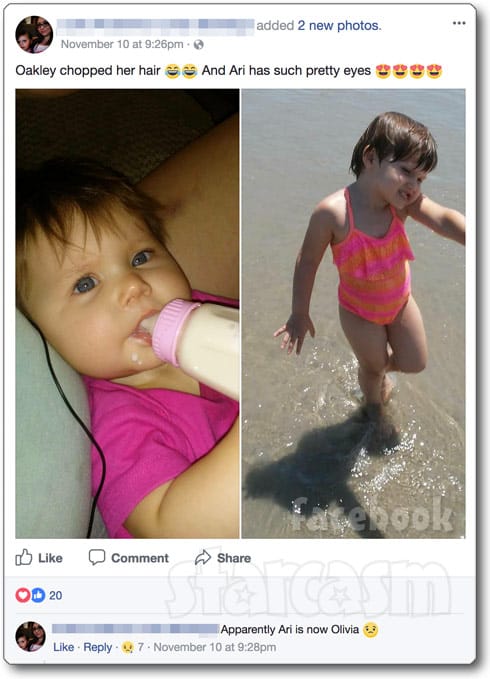 Meanwhile, Sabrina is getting back to living her life in Lancaster — which is apparently a good and a bad thing. The good news is that Sabrina is already in a relationship with guy named Jeff! The two became Facebook official on November 16, then went through a brief unofficial phase before once again declaring themselves as “in a relationship” on November 18.

Jeff looks to have had his fair share of difficulties in the past, including substance abuse problems, but Sabrina is quite defiant in defending their relationship. And speaking of Jeff’s “difficulties in in the past,” one of them appears to be an ex who is not happy that he is with Sabrina. I won’t go into too much detail about the angry exchanges between multiple parties involved on Facebook, but I will share this rather startling update from Sabrina over the weekend — which may or may not be tied to the jealous ex:

Dog tried to crawl in bed this morning and looked at him and here someone slit his throat (obviously not deep enough). Idk what the hell is going on anymore who does that ? I’m so over Lancaster and the entire pettiness of this God forsaken cult inflicted county?

And here is an excerpt from the comments section:

COMMENTER: Are you serious? Someone went after your dog cuz they hate you?

SABRINA: But I’m involved in it bc according to various sources I stole someones boyfriend hahahahaha. They are so worked up about it they had to put in on fb and make sure everyone knows I’m a junkie boyfriend stealer hahahahahahaha he was never her bf to begin with lol smh

A few comments later, Sabrina segued into addressing those folks trying to warn Sabrina and Jeff about each other: “And as a side note everyone can stop fu**ing inboxing me and telling me his life history. And likewise doing it to him with me. We dont give a flying fu**.”

Prior to the dog neck slicing incident, Sabrina had another terrifying encounter. From November 11:

Was half asleep tonight an kept hearing noises and seeing shadows… Thought it was all in my head… Until the fu**er decided to get ballsy and tried to shove the window open… Smh the dogs started barking and I never jumped out of bed so fast in my life. Wanna play more games? Here pu**y pu**y… I will shoot you…. I’ve never missed a single shot in my life ?
Welcome back to real life Sabrina.

Sabrina says that after the initial shock, she actually went outside and ran after them, “but they had too much of a head start.” Police were called, and when they arrived it created a bit of a conflict for Sabrina. “Had to resist the urge to run as soon as the cops showed up lol. It was weird being treated like a regular law abiding citizen lmao.”

Ummm… WTF?!?! Lancaster can’t really be THAT bad can it?

It’s unclear if Sabrina will ever return to the small screen as a cast member of Return To Amish. There were reports that her co-star Jeremiah Raber had signed some sort of contract with the show’s production company, but there were also reports that Abe and Rebecca Schmucker didn’t want to come back. Kate Stoltz most assuredly will never return, so that would only leave Jeremiah, Sabrina and Mama Mary Schmucker. The #MamaMaremiah duo made for some fun story lines, but these three aren’t really enough to carry an entire show. I suppose we will just have to wait and see.

UPDATE – Sabrina has since posted to clarify some things about the custody of her children:

Just in case anyone is wondering… I did not lose my kids the way people make it sound. I signed my rights over for both of them bc I need to get my sh!t together. The last time they took Oakley she cried and screamed and was a hysterical mess and I made up my mind right then that I was not going to put her thru that ever again. I didn’t want to keep fighting, get her back, and then mess up again and have to put her little heart thru so much trauma all over again. I didn’t do it bc I didn’t want her, I did it because I love her and I needed to do what was best for her and Olivia, not me. I wonder every single day if I made the right decision, but I can only hope for the best and move forward from here. I want my daughters to be able to be proud of me someday in spite of all of my mistakes, and I’m gonna do whatever it takes to make sure of that. Its the least I can do for the both of them. I am deeply sorry to both of them for allowing myself to get caught up and I also want to apologize to anyone I may have hurt with my words and/or actions. I am not proud of the choices I have made in the past and I am going to do everything in my power to make good choices from now on. Like my mom always tells me “Do the next right thing.”
Thanks to all of you who have stuck by me and cared about me thru all of this. I can’t thank you enough for your unconditional love. It has truly changed my life and I am forever grateful ❤❤