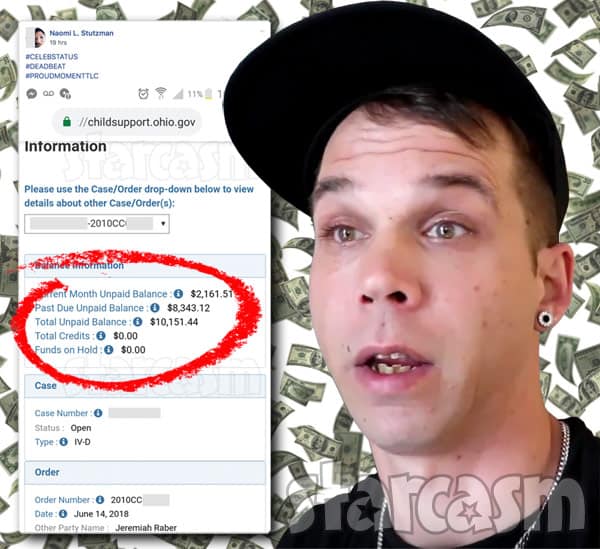 The most recent season of Return To Amish wrapped up earlier this month, but the drama continues off screen for show star Jeremiah Raber. In a recent Facebook post, his ex-wife Naomi Stutzman posted a purported screen cap from her account on the Ohio website for tracking child support that indicates Jeremiah was a wee bit behind — as in $10,000+ behind!

Naomi made the post in a Breaking Amish / Return To Amish Facebook group and she added the hash tags #CELEBSTATUS, #DEADBEAT and #PROUDMOMENTTLC. The screen cap indicates that Jeremiah owed $2,161.51 for the current month, and he previously owed $8,343.12. That means the total at the time was $10,151.44!

Here is the image posted by Naomi, with some of her account information edited out:

The screen cap is dated June of 2018, but it appears as though that was when the most recent modification on the amount was officially entered. It’s unclear when the screen cap was reportedly taken.

There was also a series of text messages allegedly between Naomi and Jeremiah posted in the group (including a post by Naomi herself) in which she asked him when he would be making a payment, to which he responded by claiming that all she cares about is the money and he simply wants to talk to his kids. She responded by pointing out that the kids have phones, in addition to a few unsavory comments about Jeremiah.

In case you were curious, Naomi and Jeremiah share three children: two daughters and a son.

In the text messages, Jeremiah also announces plans to file to lower his payment now that the show has ended and he is no longer employed. He also suggests that they will have difficulty locating him where he is currently living, which sounds like it would be a bad thing given that he is required to keep the child support enforcement agency aware of any address changes.

We did some checking, and it appears as though Jeremiah will need to do some SERIOUS job hunting if he plans to take the unemployment route. The boilerplate Ohio child support agreement requires that anyone claiming unemployment who is unable to work must be able to show they have applied for roughly 30 jobs per month — including information about the job, contact info for the employer, etc.

It should be pointed out that Jeremiah isn’t fully unemployed, however. He is still selling on eBay, including multiple listings for a mysterious “Amish Christmas box” that each include “an autographed photo of Carmela and I and a few Amish things.” Jeremiah is also selling his original artwork via his Facebook page and Instagram, and he’s making a few bucks on his and Carmela’s YouTube channel as well.

Over the past month, Jeremiah has been focusing his entrepreneurial efforts on his online shop, which offers a variety of products ranging from monogrammed cutting boards, to handbags, to shoes — LOTS of shoes. Strangely, he has not been offering Cameo appearances that I am aware of.

Of course, I assume that Jeremiah is reporting all of this income.

Oh, and in case you were wondering why Jeremiah can’t just use some of that TLC money, those paychecks dried up when the season ended. I have no idea what’s up with the Amish Donuts business. I believe Jeremiah is still living somewhere in the Pacific Northwest, and it’s clearly a bad season for fairs anyways — even in Florida.

As far as what could happen to Jeremiah if he doesn’t pay child support, those laws vary from state to state but are relatively consistent as far as potential punishment.

Once a family law judge makes a child support order, it becomes a legal obligation. However, there are times a parent might not be able to pay or simply refuses to pay. Bad idea. If a parent doesn’t pay, he or she can be held in contempt and fined or sent to jail. Also, his or her license may be suspended (including any professional licenses). A parent can also have criminal charges brought against them if nonpayment continues for an extended period of time.

For longtime fans of Breaking Amish, you may recall Naomi was one of the first people to reveal that the story lines for the initial season of the show were not true in regards to the cast members having just left the Amish or Mennonites. Here’s an excerpt from our post about Namoi’s initial statements back in 2012 in which she indicates that Jeremiah’s child support issues are nothing new:

She points out that Jeremiah, who is now in his 30s, hasn’t been Amish since he was 18. Stutzman also explains that she and Jeremiah were married for six years and share three children, for which she says he owes $20,000 in child support — part of which has since been paid by TLC.

And another excerpt from a post we did after Namoi spoke with Star magazine:

Naomi, 27, reveals to the magazine that she and Jeremiah, 32, began dating in 2002 after they had both left the Amish sect and divorced in February, 2011. She says Jeremiah has owned a cell phone for as long as she’s known him and that he was the one who taught her how to drive. “He was always always known as the guy with the coolest cars, and he bragged to me that he had outrun the cops 19 times!” Of course, all of this is in stark contrast to the “Crocodile Dundee-esque” Jeremiah we see on the show, who is amazed by such magical things as cell phones and ATMs, and who takes his “first” driving lesson in hopes of eventually becoming a New York City cab driver.

If you’re curious about whether or not Jeremiah and Carmela are still together — I don’t have an answer for that. They haven’t been in photos or videos together on social media recently, so I assume they are currently on the outs. Speaking of Carmela and Jeremiah being on the outs, I think I will leave you with my favorite clip from Return To Amish — partly because it features no less than three Starcasm articles!

#ReturnToAmish producers had a difficult task recapping all the Jeremiah and Carmela drama since the last time they were on TV, but luckily they had @starcasmnet to help ‘em out! New episode tonight at 10/9c ? #jermela