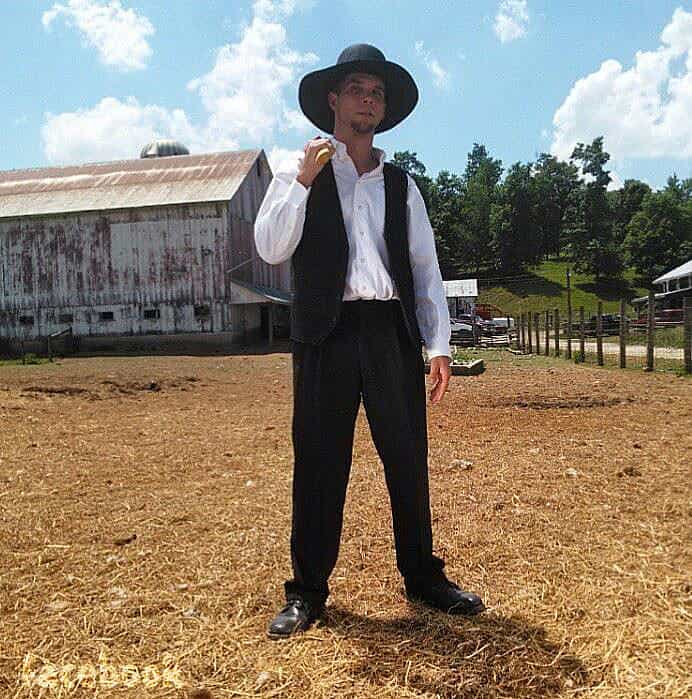 Return To Amish star Jeremiah Raber’s dream to make the leap from the small screen to the big screen may still be alive as it was just announced the scandal-ridden production of the Amish-themed horror film The Plain People is once again a go, with Jeremiah as the star.

The announcement came via the film’s official Facebook page:

The page later shared this update:

In case you missed it, production on The Plain People was shut down back in June with an official statement from the production company blaming “discrepancies with certain individuals involved with the film.” More from that statement:

The decision was made to release an actor from the production for his actions that we do not approve. These actions included, lying about conversations that never happened, sexual advancements made to one of the actresses and the repeated statements made by this actor of how he wasn’t sure of his participation with the film. At that point, false accusations were being made that the decision was all based on our want for “money and power” as made by a select few involved in the film.

Jeremiah and his now-wife Carmela later issued their own statements admitting that Jeremiah had made “mistakes,” but with no further clarification. Meanwhile, the lead actress in the film, Ashley Genova, later went off on Jeremiah, calling him a “disgusting manipulative” pig and “pervert.”

And speaking of Ashley Genova going off, she responded to the film’s Facebook announcement about production starting again with some rather irate words:

This is not same movie or script only he same sexual predator and photos being used shadily. No credit being given to the photographer, no watermarks… But behavior expected. I love how false allegations bc I didn’t send the penis pic after threats of a lawsuit? Wat about the shower pics he sent that were shown as well as messages. Guess that’s acceptable behavior ???

Here is a promotional photo for the movie featuring Jeremiah and Ashley together from happier times:

It seems that the original creator of the idea for the film, Jim Kuhn, is now fully in charge after an acrimonious split from director/writer Tom Stoops. There was some debate initially over ownership of the film as Tom Stoops is head of Twisted Brothers Production company and wrote the script. Tom reacted to the announcement that production will resume and seemed to indicate that the question of ownership may still be up for debate:

Hello everyone. There is not much I can say on here at the moment other than that I nor my company is involved with the individuals posting on the Plain People Facebook page. Once I evaluate the situation between myself and my advisors, I will inform everyone publicly the situation. Until then, feel free to share the information I just relayed to you. I know it isn’t much. Many thanks and blessings to you all.

In the comments section, The Plain People Facebook page revealed “the script is being written as we speak,” so at least they are not planning on using the one written by Tom Stoops. However, fans anxious to see Jeremiah’s feature-length debut shouldn’t get too excited just yet. “It may take a year or two for production to begin,” the page reveals.

Jeremiah himself also replied in the comments section, using it as an opportunity to grandstand, albeit very vaguely. “Ive always told people that the truth will come out eventually,” he wrote.

UPDATE – Some clarification from Producer/Director Jim Kuhn on his role and Jeremiah’s:

I want to make this PERFECTLY CLEAR. Myself being Jim Kuhn is still the Producer/Director of this movie “The Plain People”. Jeremiah Raber is NOT at all in any way helping Produce this film he is simply an Actor. I can choose whomever I want to be involved with this production and if you don’t like it unfollow this page and move on its that simple. The script is being re-written so it is perfectly legal. Also, even though I own the rights to the plain people name and the concept, it will be a working title. I brought on Tom Stoops to help produce the movie after I pitched him the outline of how myself & my son envisioned a 1 of a kind movie never before seen. He jumped on it immediately. I want to make that perfectly clear. I am also the creator of this page.. I am really tired of the “he said she said” bullcrap high school drama being said on other social media sites. Grow up people. You either watch this movie or not that’s your choice. Thank You for your time..