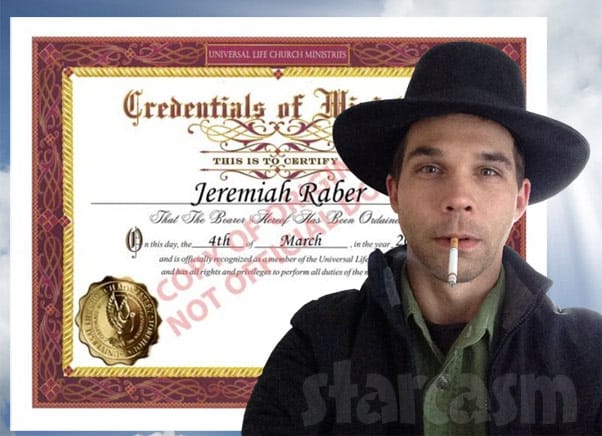 If you want to eat Amish donuts and catch online sexual predators while getting married with a Breaking Amish themed ceremony, then Return To Amish star Jeremiah Raber is your one-stop shop!

Earlier this year, Jeremiah began a potential new career on YouTube as he and some friends posed as a young girl online, attempting to lure adults to meet up and be confronted on camera. Never one to rest on his laurels, Jeremiah just revealed that he has also been officially ordained as a minister!

One of Jeremiah’s followers asked him in the comments: “Can you marry people?”

Here’s what the certificate states, with the caps intact:

THIS IS TO CERTIFY That The Bearer Hereof Has Been Ordained On this day, 4th of March, in the year 2020, and is officially recognized as a member of the Universal Life Church and has all rights and privileges to perform all duties of the ministry.

Of course, I had to look up the Universal Life Church, which looks to be an online minister mill — and proudly so! Here’s the sales pitch from the church’s website:

Everyday Universal Life Church ministers perform thousands of legal weddings, baptisms, funerals, and even operate their own churches! If you are wondering how to become an ordained minister, you’ve come to the right place. Utilizing the ULC’s instant online ordination platform, anyone who feels so-called can become a minister within seconds.

Over 20 million people around the world have already chosen to get ordained online with the Universal Life Church; over the last few decades it has become one of Earth’s largest and most active religious organizations. The Monastery has only two tenets: 1. Do only that which is right, and 2. All should be free to worship as they see fit. Get ordained online today and join the Universal Life Church’s global family!

It’s not clear if Jeremiah got certified in order to perform a marriage ceremony, although that would certainly be the most obvious explanation. Who knows though, Jeremiah seems like someone who might try to start a church. We will keep our eyes out.

As far as Jeremiah’s new career catching sexual predators on YouTube, his last video doing that line of work was from February 20. It’s titled “This Was A Failure” and appears to be Jeremiah riding around in a car for 24 minutes. I confess I didn’t watch it, I just fast forwarded through the preview thumbnails to make sure nothing actually happened.