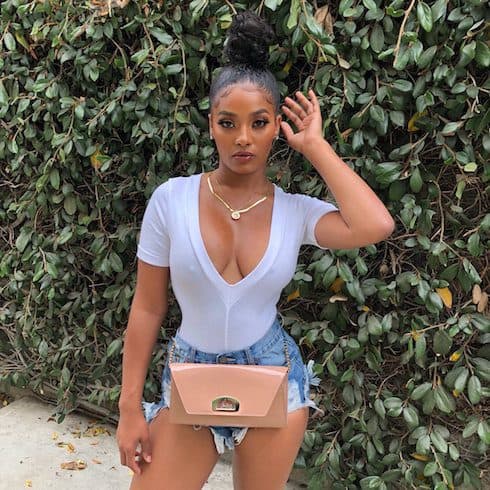 New Love & Hip Hop Hollywood Season 5 cast member LaBritney Franklin has ambition for days, and hustle to match. But who is LaBritney? Her bio reads almost like a movie script: she became a mother very early in life, yet still found a way to navigate the rocky road to success. And now, still at a young age, she’s poised to take everything reality TV has on offer. But will navigating the choppy waters of TV drama — and out in Hollywood, thousands of miles from her Detroit home — prove to be too much for the “How We Do” singer, or will she rise up yet again?

Dearly departed Love & Hip Hop Hollywood star Masika Kalysha has moved on and is currently clapping back on WEtv’s Growing Up Hip Hop. So there’s a void in Mona’s Hollywood kingdom, and it looks like LaBritney on Love & Hip Hop could help fill it. The entertainer’s official VH1 bio refers to her as “hyper-ambitious,” and her hustle is definitely reminiscent of the Masika Kalysha mold.

LaBritney — whose full name is LaBritney Franklin — has been a big name in the Detroit hip-hop scene for years. She’s a single mom, and has been one since she’s a teenager; her LHHH intro video explains that “turning her dream into a career has been a rocky road,” but one that’s made her the “loyal and hard-working” performer she’s already known as back in Michigan.

But who is LaBritney when the cameras are off? Her official bio doesn’t tell the whole story — for example, as LaBritney revealed in a 2017 interview with Stewe, she actually gave birth at fourteen. (LaBritney’s son almost never appears in her social media feeds, and neither does LaBritney’s age; in fact, she’s one of the few new Love & Hip Hop Hollywood stars to scrub her Instagram page before her debut on the show.)

So 30-year-old LaBritney has been been a full-time mom for a little over half her life, and a full-time professional in the music business for almost half as long. She put her backstory like this:

I’ve always been into performing arts since I was a little girl — dancing, singing in the choir, I was a cheerleader….I didn’t go to college so I could join up with a girl group [and sing] Disney pop. That was when it went from just being a passion to being real….I became a mom when I was fourteen years old. I have to balance my life very well, to make sure I’m being a full-on mother…but then I also have to give 100% to my career, and what I do. And I remember times when I was just like, ‘Damn, should I just quit this sh!t and just get a regular job and live a regular life?’….But if I spend one day not dedicated to my craft, I go crazy. This is what I do.

LaBritney also claimed that her hustle is so strong, she doesn’t even have time for relationships. “I’ve never dated before,” she said, adding “I was in a long, long relationship and I just got split.” (We’re betting that that may change very soon, thanks to the demands of reality TV.)

Judge LaBritney’s music for yourself

One of LaBritney’s first brushes with nationwide fame came in the form of her popular LaMix video series, which she produced and directed herself throughout 2016 and 2017. According to LaBritney herself, the remix series was just a way for her to take popular songs and put her own (often a capella) spin on them, with a specifically DIY approach. She explained as much to Rolling Out early last year, when the series started to take off:

I recreate the production using household items such as Hennessy bottles, Hot sauce, Doritos, and then I would create my own vocal arrangements on top of the production. I also created my own choreography, and wardrobe. It’s literally a one-woman band. So as I’m doing these videos, they ended up going viral. A lot of artists and huge blogs have reposted my videos which have helped me grow a following. This is why social media is amazing. You literally have the world at your fingertips.

Another reason for the LaMix videos’ popularity was how short they were. For example, here’s LaBritney’s take on the Queen of Soul classic “Respect” — it’s just long enough to get a sense of LaBritney’s overall vibe, as well:

But, as LaBritney also explained, the LaMix tracks started to pigeonhole her as a “social media girl,” and meant she “wasn’t being recognized for the artist [she is].” So she stepped up her own game and started releasing original tracks more frequently, using her newfound exposure as a springboard. The video for “Celebration,” her latest single, just dropped this week, in time with her Love & Hip Hop debut:

To keep up with LaBritney between episodes, you can follow her on Twitter, Instagram, Facebook, and of course YouTube for all of her musical updates. But after all that, don’t forget to tune in: Love & Hip Hop Hollywood Season 5 airs Monday nights at 8 on VH1.