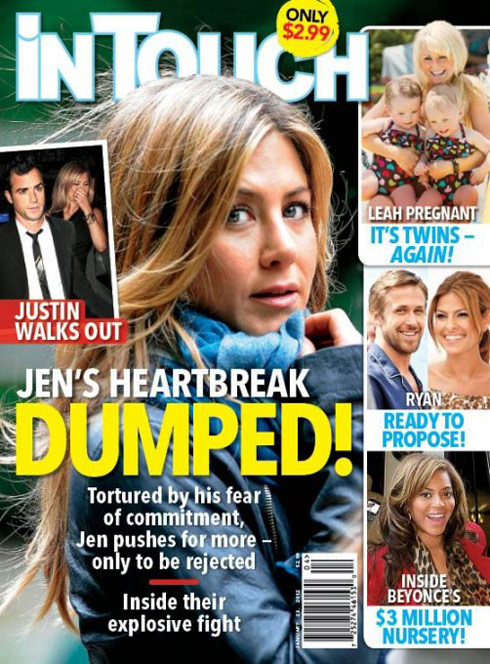 It’s the middle of the week and all celebraddicts know what that means – new tabloids! And as the second season of Teen Mom 2 chugs along so do the numerous cover stories about the girls.

In case you missed it last week, Leah Messer’s new fiance Jeremy Calvert revealed in an interview with Reality Weekly that she is indeed pregnant again, and also that the two are engaged after Jeremy proposed on Christmas day.

Not to be out-scooped, In Touch has gone to one of their unnamed “inside sources” for a shocking Leah Messer follow-up announcement: “Leah Pregnant – It’s Twins Again!”

“She just found out last week,” the source tells In Touch. “Leah can’t believe how lucky she is to have two more babies. [She] is absolutely thrilled.” 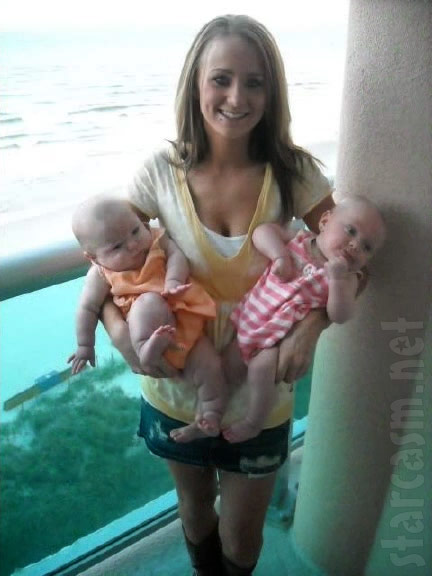 ^ Leah Messer with her first set of twins, Ali and Aleeah

As usual, In Touch‘s source adds all sorts of details about Leah’s situation and feelings, including her aspirations to become… the new Kate Gosselin?

“She thinks the babies will help her to get her own spin-off show,” says the insider. “And that means a much bigger salary.”

“She wants her own series and her own brand, just like Kate,” the source adds.

So why all the desperate longing for more fame and money?

“She’s already blown this season’s paycheck,” according to the source. “She desperately needs cash” after purchasing a new home and SUV.

“Her friends are worried she won’t be able to handle it all,” a different “friend” adds. “She’ll have four babies — one of with special needs — and she’s a child herself.”

“Leah’s worst nightmare is being a single mom, broke and alone,” agrees the source.

Unlike the Reality Weekly article (which actually had an interview with Jeremy Cavlert), I think we can take this one with a HUGE grain of salt. IN FACT, DON’T BELIEVE IT AT ALL. Our sources close to Leah confirmed that it’s not true, and UPDATE: Not only that, but Leah herself refuted this report of twins on her Twitter account! She tweeted January 12: “Thank you @intouchweekly for telling me I am having twins again, love bad reporting and fake stories, it does sound like a Soap Show! Ha!”

She didn’t deny that’s she’s pregnant though, and despite reports to contrary, she still has not personally confirmed her pregnancy! Maci Bookout’s Official Facebook (which is approved by Maci, but not ran by her) did say “Leah is pregnant, but not with twins guys….don’t listen to rumors!” while linking to this very article!

CLICK HERE to catch up will all episodes of Teen Mom 2 via Amazon Instant Video.