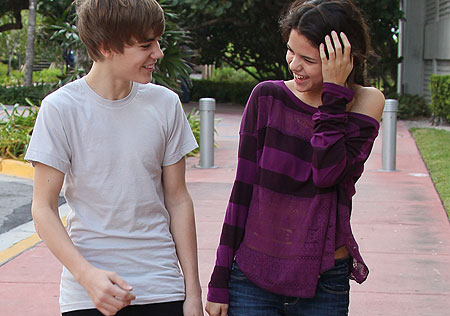 BlindGossip.com says they solved a blind item they ran last week about a spurned proposal. They claim that not only did Justin get turned down when he proposed to Selena, but that their whole relationship was just a PR arrangement that Justin ended up taking too seriously.

According to BG, the two of them were friends before their PR teams arranged for them to be together, but Justin really enjoyed have Selena as his girlfriend, while Selena viewed the relationship as all business and wants to be friends with him. She supposedly rejected two of his proposals before they broke up, and because that was obviously humiliating for Justin, the official reason why they split was “scheduling difficulties.”

As for the reports that Justin cheated on Selena, or that Selena didn’t trust Justin?

There have been various leaked reports that someone was cheating, someone was jealous, etc. These rumors are just attempts to deflect attention from the fact that Selena rejected Justin. The simple truth is that they are both way too young to get married, that it was just a business arrangement, that it’s time for them to move on, and that it’s good that at least one of them had the common sense to say “Enough.”

Hmmm, do you believe this report? If this is true, it must be incredibly painful for Justin, and it would be sad, but understandable, if he became bitter about love after this.