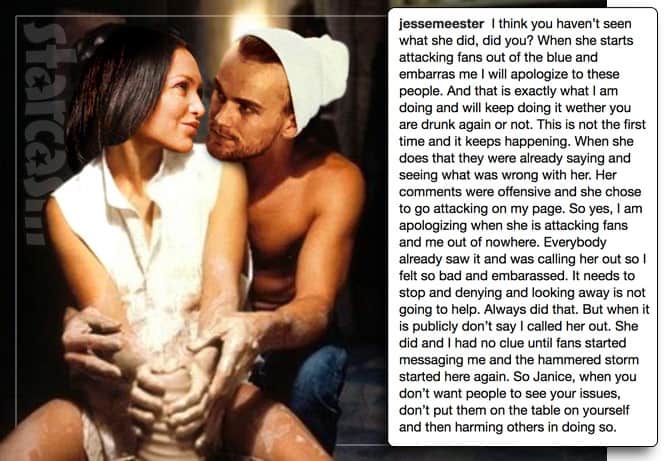 It appears as though the eternal #twinflames are no longer burning together as Before the 90 Days‘ Jesse Meester and Darcey Silva look to have broken up after she posted a series of jealous and angry (and drunken?) comments on Jesse’s Instagram account.

The drama went down in the comments section of a video clip posted by Jesse in which he “branch”ed out from #Meesticism to #Treesticism as he admired a tree — and said as much:

Alright… tonight is the night! I’m waking up at 2 AM in Amsterdam to be live with you at 8 PM EST during #90dayfiance with @johnyates327 and @danielle_jbali. Are you ready? And did you dowload the app already? @tvpartyapp ?? #livewithme #comeatme #chatwithme #beforethe90days #live #ready #app #seasonfinale #realitytv #areyouready #admiring #tree #ad

“Good morning guys!” Jessie beams, with his trademark blonde cockscomb poking out of a white hoodie. “I was just admiring this beautiful tree outside. How are you doing?” Jesse then goes on to announce that he planned to be live with fans during Sunday night’s episode of Before the 90 Days via the TV Party App.

Just like most everything Jesse does, the video seemed innocent enough. As did a couple of comments left by a woman who wasn’t necessarily a fan of Jesse pitching an app, but who loves the show and #Darsse.

“I get the whole #90day thing. But advertising….not the strongest suit. I love you guys though♡” The commenter wrote. She then added: “looking forward to today’s episode #curious ?”

Everything still seems innocent — until Darcey chimes in: “Maybe you guys got something special,” she responded. Wait, what?!

“Not sure what you mean Darcy lol seems off topic,” the commenter replied.

“If u want him then just ask him,” Darcey wrote.

More from the original commenter and another who chimed in: 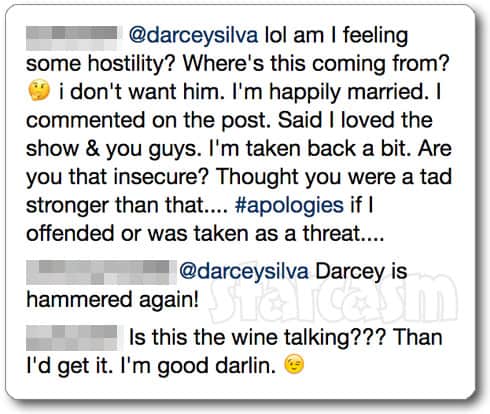 Jesse caught wind of Darcey contaminating his feed with negativity and offered up his apology: 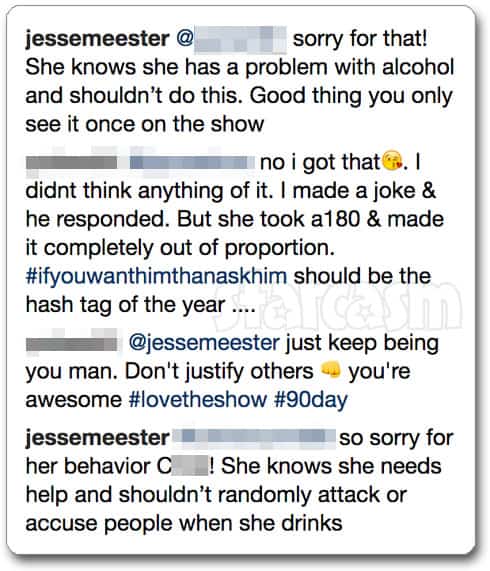 Either Darcey or Jesse deleted her comments, and someone arriving to the show late asked: “What was the conversation with Darcy about?? Are they still together?” Jesse responded with a lengthy explanation, followed by another comment and another Jesse response:

JESSE: I think you haven’t seen what she did, did you? When she starts attacking fans out of the blue and embarras me I will apologize to these people. And that is exactly what I am doing and will keep doing it wether you are drunk again or not. This is not the first time and it keeps happening. When she does that they were already saying and seeing what was wrong with her. Her comments were offensive and she chose to go attacking on my page. So yes, I am apologizing when she is attacking fans and me out of nowhere. Everybody already saw it and was calling her out so I felt so bad and embarassed. It needs to stop and denying and looking away is not going to help. Always did that. But when it is publicly don’t say I called her out. She did and I had no clue until fans started messaging me and the hammered storm started here again. So Janice, when you don’t want people to see your issues, don’t put them on the table on yourself and then harming others in doing so.

COMMENTER: So sad I don’t understand she wanted this relationship she got what she wanted for you to fall in love with her then she sabotaged it and throws it all out the window that’s crazy I think she’s a wonderful person unfortunately she has a disease and maybe if she feel the consequences of losing you she will probably seek help No one is perfect we all make mistakes it’s all about learning from them if you don’t then all we can do is pray that one day they learn to love themselves enough to seek help.

JESSE: you took the words out of my mouth. This has been going on for over a year now and again she turned herself to the public attacking fans who just stated they were excited and happy to see us. This just gets worse and I’ve done nothing but be receptive and helpful (which wasn’t aired) and kept a lot to myself because it is something she needs to overcome. But now she is the one putting herself out there by attacking people here. This was just embarrassing. We can only hope and pray this is THE wake up call. 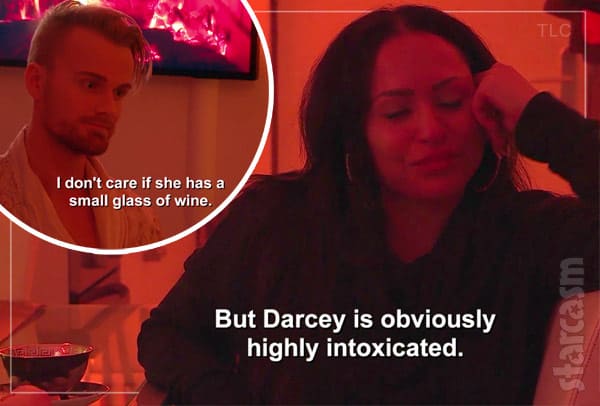 Since the “too many wines” comment fiasco, both Darcey and Jesse have deleted all the photos of the other person from their Instagram feeds. Neither have addressed the split specifically, with Jesse returning to his trademark Meesticism while Darcey is posting TONS of throwback photos of herself and surreal video clips of her daughters.

The apparent break up comes less than two weeks after the two celebrated their one-year anniversary with dueling declarations of love. That was followed by more photos and more poetic proclamations leading right up to the moment Jesse expressed his admiration for a tree and it all fell apart.

Will Jesse and Darcey reconcile? Will the #twinflames be rekindled? Stay tuned!