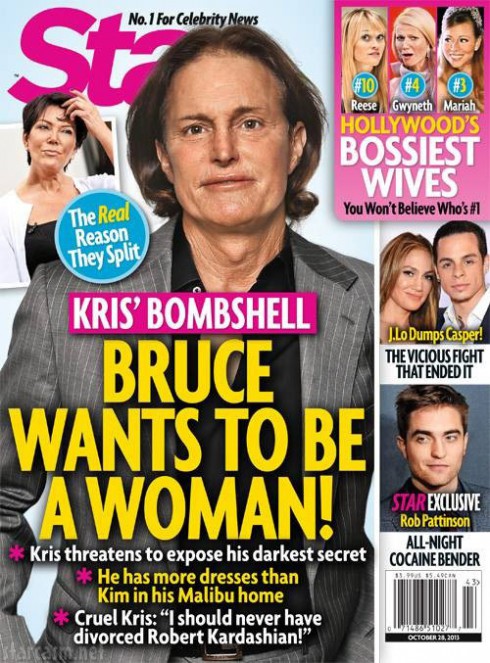 In the latest proof that it is now impossible to walk away from a Kardashian marriage quietly, the new Star magazine cover story is claiming “Bruce Jenner Wants To Be A Woman” and that his estranged wife Kris Jenner is threatening to “expose his darkest secret” if he doesn’t handle the split the way she wants it handled.

MediaTakeout.com has a quote from the article in which Kim Kardashian allegedly found some feminine unmentionables in Bruce’s closet:

Kim told [Bruce] she had his lingerie. He turned red and walked out. When Kim finally told her sisters, it became a running joke that Bruce wears lingerie. . .

A second source also claims to be aware of Bruce’s penchant for women’s underthings. “He’s always been feminine, so it doesn’t surprise me when I found out he was a cross dresser.

The Star magazine cover claims Bruce “has more dresses than Kim in his Malibu home” and implies that Bruce’s penchant for wearing women’s clothing (and apparently wanting to be a woman) is why she said recently, “I should never have divorced Robert Kardashian.” 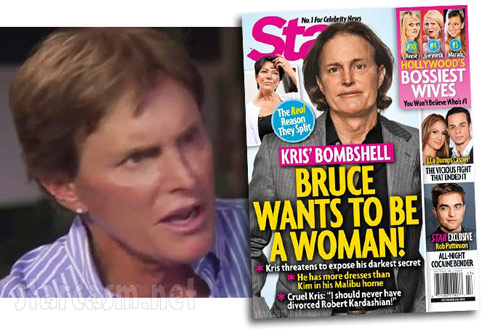 Perez Hilton has an additional, slightly less shocking quote from the Starticle that reveals some of Bruce’s other “feminine” characteristics:

Bruce has a feminine side. He likes growing his hair out, likes getting manicures and pedicures and won’t leave his house without his diamond earrings. And he’s obsessed with plucking his eyebrows! Kris has told Bruce that she will reveal his secret if he doesn’t go along with her plans about their split or their show.

It should be noted that not only is the Bruce Jenner cross-dressing story nothing new, but it’s nothing new for Star magazine. In January of 2012 the tabloid ran another “Bruce Jenner is a cross-dresser” story after talking with Robert Kardashian’s widow Ellen Pearson. Here’s the January 23, 2012 Star magazine cover on which you can see the headline at the bottom that reads, “Bruce Jenner Caught Cross-Dressing!” 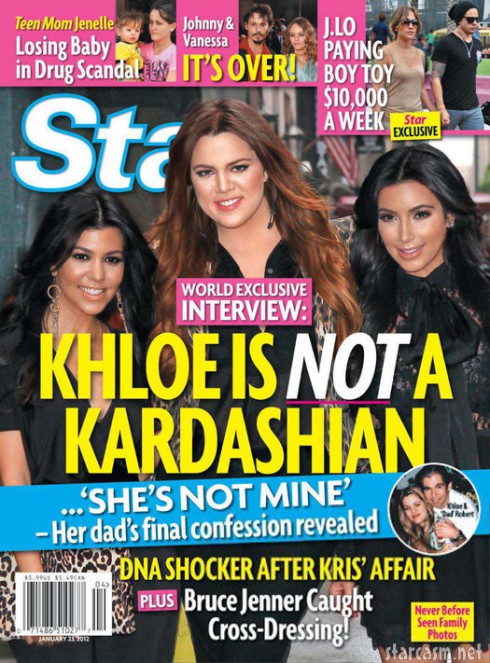 Pearson told the magazine at the time that she was having drinks with Bruce Jenner’s first wife Chrystie Crownover (Hollywood’s a small town, y’all!) when Chrystie revealed that Bruce secretly liked to wear women’s clothing, including dresses, shoes, and lingerie.

“Of course Bruce was every woman’s heartthrob when he was that age, right?” Ellen asked Chrystie of the Olympic decathlete. “But Chrystie said, ‘Yeah, until I went on a trip and I came back and he had gone through all my clothes. And I found my bras… He’d clip them together and wear them.'” Chrystie would later divorce Bruce after having two children together.

Ellen said Kris Jenner was a bit more forgiving of Bruce’s fashion fetish, but the same could not be said for Kris’s daughters. “Khloe called her dad and she was very upset, crying and screaming about it,” Ellen said.

(I don’t actually have the issue from 2012 in front of me, and now I’m starting to wonder if maybe that’s where MediaTakeOut got their excerpt from? Or perhaps it’s just Star recycling some of their previous content that didn’t make it into print before?)

To find out the answers to those questions and more, be sure to pick up this week’s issue of Star magazine!

* All I want to know is when will Bruce get his own line as part of the Kardashian Kollection? And does this mean his toy helicopter fetish was fake or not?!? Soooo many questions!!!

UPDATE – In April of 2015 Bruce Jenner confirmed he is transgender, identifies as a woman, and does like to wear women’s clothing in an interview with Diane Sawyer that was watched by nearly 17 million people when it aired.

Kourtney Kardashian update: Star reveals she is ‘definitely not’ back with Scott Disick