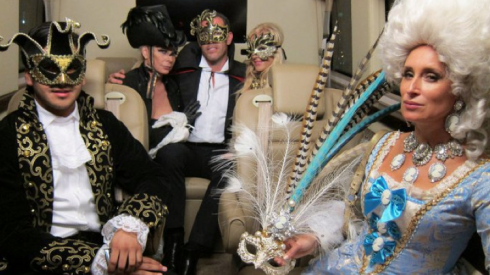 Sassy Sonja Morgan gave a candid, cheeky interview to The NY Post‘s Mandy Stadtmiller about some of the hot topics going on in her life at the moment, and on this season of The Real Housewives of New York.

“Sure, file Chapter 11. I have $19 million in shoes. Let them eat cake!” she says, while wearing a Marie Antoinette costume designed by Project Runway’s Chris March, which she wears to a costume party this season. The outfit is charming, but it does seem to be missing the bottom half: the season teaser features a full moon of Sonja booty.

Sonja (who claims that she has $13.5 million in assets,) filed for bankruptcy last November, citing $19.8 million in debt.  Morgan says that the debt comes mostly from mortgages set up by her old-monied ex-husband (80-year-old J.P Morgan heir John Adams Morgan.) The main reason she had to file is because of a $7 million lawsuit against her by Hannibal Pictures over a failed movie project called Fast Flash to Bang Time that was supposed to star John Travolta. It’s a messy situation, but Sonja doesn’t seem to be sweating it too much:

“Well, filing Chapter 11 means they may not get one penny. And I’m back where I started. Just down a few legal fees. In the next six to eight months, hopefully we’ll have a follow-up interview, and I can say . . . “Let everyone have cake!”

Sonja has a knack for revealing a few juicy details, but remaining coy about most of her private life. She doesn’t explain why her marriage to John Adam Morgan went sour (he’s 33 years her senior, but she says she had daddy issues,) telling The Post: “He was a good husband, and he was a great lover. It was an excellent marriage, and you wouldn’t believe the story if I told you why it went wrong.”

Right now she’s linked to a hot artist named Brian Farrell, but like many Real Housewives (and many women,) she’s also possibly dipped her toe in The Lady Pond.

She also once dated Charlie Rose, and describes him as quite the ladies’ man! It’s not surprising. His low-key, in-depth interviews are pretty sexy:

“I’ve been known to date Charlie, luckily. Along with the other hundreds of girls. He is wonderful.”

As for Marie Antoinette, Sonja is embracing the icon as a representation of the way the public views her lifestyle:

She was known to be a flirt, and she used her powers in love — and that always excites me. I know people always have a perception of me as being excessive because of my last name and because I am a glamour puss and I will dress up, and I want to wear the best I can afford at the time. But also because I’m on “The Real Housewives of New York City,” and that’s what people want to see. They want to see the hats and the shoes and the cars, and that’s what we give them. The other thing I notice on these reality shows: You can be as crazy as you want. Crazy as a bat. You can, like, throw furniture and look certifiable and you still get paid for appearances.

Let all the Housewives have their cake, eat it too, and then throw the leftovers across the room. The Real Housewives of New York premieres tonight on Bravo @ 10 ET. Read the rest of the Sonja interview here. 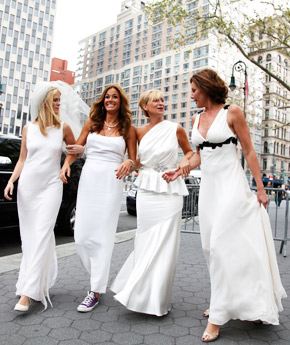