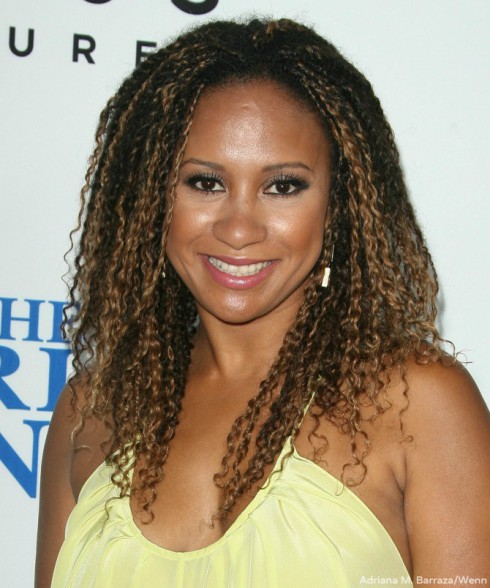 Rent‘s Tracie Thoms found herself emotionally involved in a nonromantic, social media-based relationship with a fan named Sammie two years ago only to learn the woman was a pathological liar. Seeking some resolution, the well-known actress contacted MTV’s Nev Schulman and Max Joseph for their help in discovering the real woman behind the Twitter profiles. (Considering communication between Tracie and Sammie ended two years ago, you could say it’s a Cold Case/Catfish crossover!)

“I had no closure from it. It happened and I just kind of took my hands off the wheel. I never confronter her,” Tracie said, speaking to Good Day L.A. about realizing her friend made up and subsequently killed off another fake persona named Reese… As explained in this handy infographic from MTV! 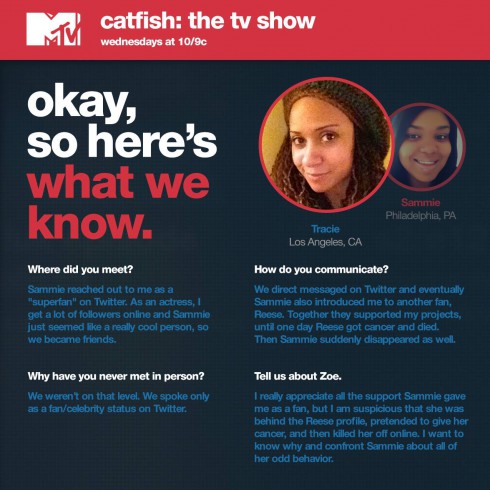 Tracie said the incident made her wary of interacting with fans as freely.

UPDATE Tracie told People more about her intentions with Catfish.

“Doing this episode was never about shaming my fans or shaming Sammie. I just really wanted to understand and check on her, because we did develop a bond. What I do not want to happen is for people to bully Sammie,” she said. “I also would love fans to know that they don’t have to do anything like this to get attention. It’s probably not the attention they want.”

She live-tweeted the show…

Tracie also referenced The Glee Project‘s Marissa von Bleicken, who had her own run-in with Sammie. (Her case involved some interesting handwritten letters and poems.)

She concluded with a retweet from Chastity Bites, which was written by Lotti Pharriss Knowles, who was also catfished by Sammie.

I like that @traciethoms & Sammie just hugged it out. And Sammie, we forgive you – just do good from now on, okay? @CatfishMTV #catfish

Drew Barrymore engaged to Will Kopelman