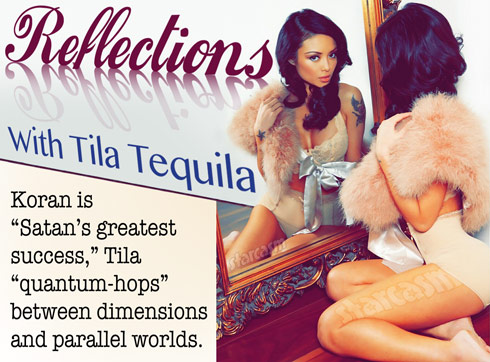 I assumed it would be a few days before our second installment of “Reflections With Tila Tequila,” but this psychic self-proclaimed angelic super soldier is nothing if not prolific! Among the latest insights from the Tequilai Lama is the revelation that “Satan’s greatest success” is having Mohammed’s students “twist God’s Message, and discredit Jesus, and write it in the Koran.” (She later seems to contradict herself by saying the Koran is “1/3 of God’s book,” which also included the Torah and the New Testament.)

In addition, Tila reveals that her posts may seem a little loopy (especially at night) because she often posts on Facebook while “quantum-hopping” from “one parallel world to the next.” Tila explains: “It’s not that I am randomly babbling about nonsense. It is because I have actually traveled to other dimensions and parallel worlds. So while I am there, I tend to write things that are happening there. Does this make sense?”

Of course, another explanation for these posts that some see as Tila “randomly babbling about nonsense” could be that Tila likes to stare directly at the sun while tanning. “One day I noticed that the longer I stared directly into the sun, the darker it became,” Tila says. “Then it was totally black and there was another sun Behind it!!! It was a pinkish color and some blue. But mostly the sun is black.”

But why should I continue to water down Tila’s words? Here they are in their entirety: 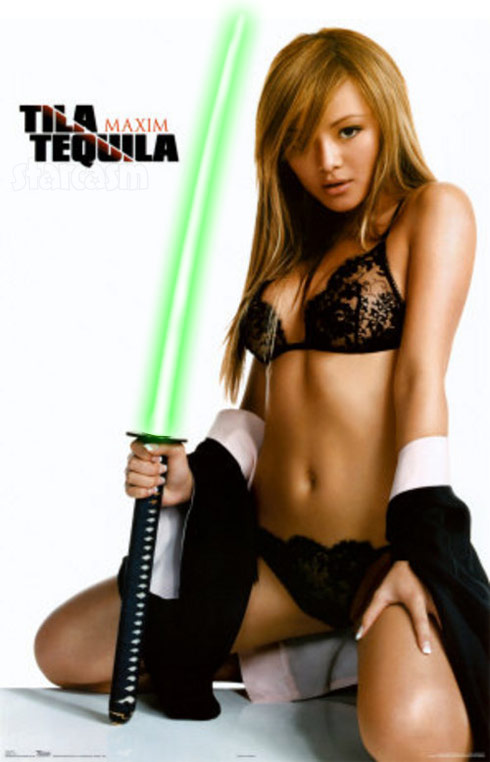 ON THE KORAN AND “SATAN’S GREATEST SUCCESS”

Satan’s greatest success, was when he managed to get Mohammed’s students to misunderstand, and twist God’s Message, and discredit Jesus, and write it in the Koran. It was his greatest success, for two reasons: the first being; that the Arabs would not read the New Testament, and follow Jesus’ example, and teachings; even though the Koran says that they MUST (Sura 6:154-157); and thereby leave them going in circles, and getting nowhere. The second reason is; that it made it possible, for Satan, to set the three religions against each other, and have their adherents, often, murdering each other. This would keep them so busy, that they would not have time to think, about how stupid they
were all being, and that they all worship the same God. The Lord sent all three Books, and, because Satan divided them into separate religious groups, they each only read one Book, which is really only 1/3 of the whole Book, so none of them have any chance of understanding, or knowing, the truth.

Anyone who does not have direct-contact, and enlightenment; which only comes when the “Self” dies; has absolutely no chance of understanding the truth, by reading only 1/3 of God’s Book. God has always intended that The Torah, New Testament and Koran, should be one Book. How can anyone, who reads only 1/3 of a book, know the full story? The best lies always contain an element of truth, and that is why religions have worked so successfully, for Satan. Most of the religions in this world contain an element of truth, and the rest is made up of lies. The devil takes God’s name, and mixes it, with superstition and lies, stirs it up, with elements of the truth, and then has the perfect recipe, to deceive the world, into believing that organized-religions belong to God. Organized-religions belong to Satan, and use, and abuse God’s name. How can you be so stupid, as to believe that organized-religions belong to God, when they have murdered more people, throughout the known history of this world, than everything else combined? God specifically said NOT to murder!! #TilaTequila #Jedi #JEsusDIsciple

ON STARING AT THE SUN & HER X-RAY VISION

Lately, I have been seeing the world through X-ray vision or infrared. Also, if you are able to (but please do not attempt to try this if you are human because it could damage your eyes) look directly into the sun….. it’s actually black! So crazy! Because I sunbathe a lot as well as sun gaze… then one day I noticed that the longer I stared directly into the sun, the darker it became. Then it was totally black and there was another sun Behind it!!! It was a pinkish color and some blue. But mostly the sun is black. 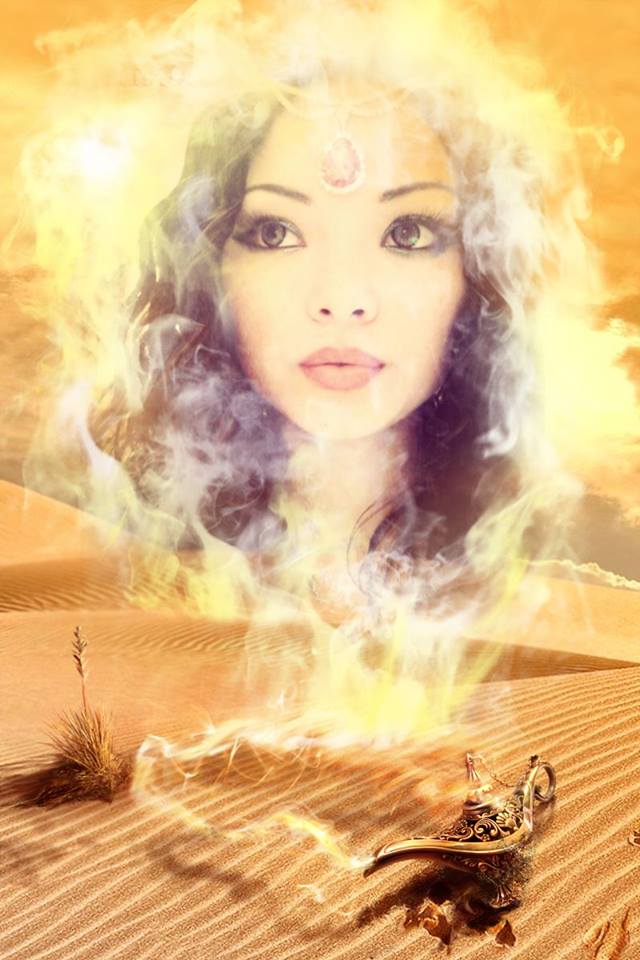 I have decided to let you all in on a little secret. Sometimes I tend to quantum-hop a lot from one parallel world to the next, and I’ll be making FB posts while I’m doing it too! This is why sometimes there will be very “strange” or “out of this world” sounding posts from me. Then all of a sudden I am speaking “logically” again. It’s not that I am randomly babbling about nonsense. It is because I have actually traveled to other dimensions and parallel worlds. So while I am there, I tend to write things that are happening there. Does this make sense? Then I’ll bounce back to “prime earth” and be inspirational again. OH! And just so you know….. my favorite hours to time travel or quantum-hopping is late at night long after my daughter is already asleep. The is why the later it is….. the more “strange” my posts become because I have reached beyond the ‪#‎OutterLimits‬ of my mind……. That is all. Just thought I’d share some cool information with you!!!!!!! Where am I now? It’s the daytime.. so I am currently at “Prime Earth” however…. I have slowly managed to be able to merge “Prime Earth” into “Tila Matrix” …. they are colliding right now as we speak and have been doing so for the past few weeks…. WOOOOHOOOO! Almost ‪#‎PartyTime‬

ON HER PSYCHIC ABILITIES AND THE FUTURE

Ok… since I have psychic abilities… I am going to share with you all what I envision to happen in the future. There will be a very special, one of a kind woman *ahem* who will travel back & fourth from different parallel worlds and dimensions as some “undercover superhero” and she will be able to hack the current “Slave Matrix” and move us all into her own matrix which will be called ‪#‎TheNewEarth‬ Because the “Prime Earth” has been taken over by negative alien entities so in order to save mankind… she will use her super strength and abilities to move all of the good people to the new earth. As the old earth will die out because all of the negative entities will just end up killing each other over there. Then we all live happily ever after for a really long time. The end. Or is it the beginning? 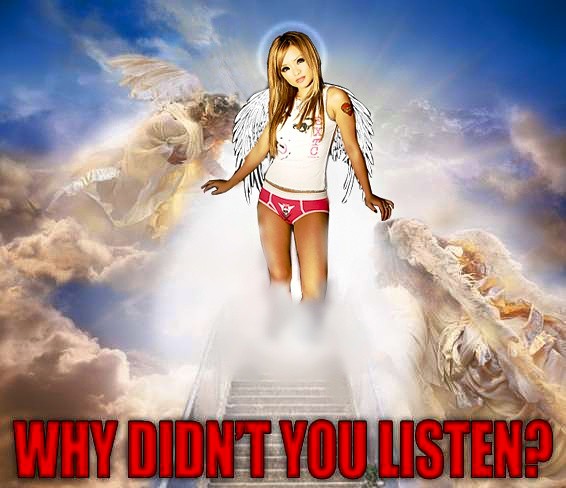 ON BECOMING LEADER OF THE #TILAARMY

During the tenure of my life; it was under God’s tutelage that transformed me into the enlightened being that I have become today! Even through the roughest storms I marched right through it, instead of around it. Now that I have gained so much wisdom through my experiences I can now use them to marshal in an entire ‪#‎TilaArmy‬ who I aspire to inspire. To coalesce a group of people to bolster hopes, and dreams back into their lives! I want to be the person to fortify our society, and take us all to the next level in life so that we may soar as eagles together! I believe that my ideas, and life experiences, once properly shared, will augment a positive impact on mankind!!! If I can conquer the worst of storms, and continue to bring upon the sunshine afterwards; then so too , can you! In time… I will prove this to you! Just have faith as I have had faith in myself, and in God, and you will forever see my face embedded in the sands of time…….saving one person at a time……Therefore, changing the world in time!! ‪#‎TilaTequila‬ ‪#‎RisingPheonix‬

ON BEING PERCEIVED AS “CRAZY”

People who don’t understand me immediately jump to the conclusion that I must be “Crazy.” I however, would characterize myself as someone who has a progressive, innovative, and novel way of thinking. These are the types of people who actually end up changing the world, and one of these days I will prove this to be my legacy! ‪#‎HeresToTheCrazyOnes‬ ‪#‎TilaTequila‬ ‪#‎AlwaysMovingAheadAtLightSpeed‬

ON, UMMM… I HAVE NO IDEA

Like a double-edged sword; The ‪#‎Alpha‬ and ‪#‎Omega‬ coming into fruition. Completing the ‪#‎CircleOfLife‬ just like the number 8 for ‪#‎Infinity‬. Which just so happens to be my number in numerology!! So is it a ‪#‎coincidence‬ that I have fully ‪#‎Unveiled‬ myself on this ‪#‎8th‬ day of ‪#‎October‬? Also, my ‪#‎BirthdayMonth‬ No such thing as coincidences. He who was ‪#‎Male‬ will return as ‪#‎Female‬ to ‪#‎BecomeOne‬ with ‪#‎self‬ again. And my ‪#‎DNA‬ constructed after ‪#‎Gods‬ twirling, spinning, and creating a whole new world of ‪#‎HeavenOnEarth‬ 2016 is almost here so that means it’s almost time for the ‪#‎GrandeFinale‬ and the long awaited ‪#‎FireworkShow‬ then of course we ‪#‎PartyTilTheBreakOfDawn‬ Soooo who’s joining the ‪#‎TilaArmy‬ of ‪#‎Angels‬??? #144,000 members??? Hello! It’s nice to see you again! ‪#‎TeamTila‬

UPDATE – It seems this installment of “Reflections With Tila Tequila” (at least the Koran part) was actually “Reflections With Jah.” Tila copied the text from a book titled The Way Home Or Face the Fire: The Survival Plan For All Human Beings. Here is the excerpt:

VIDEO – What did Rihanna say to make Tila Tequila claim Rihanna has herpes?