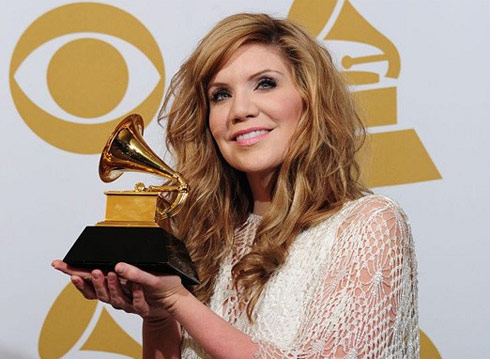 Q: Who just tied Quincy Jones for the most Grammy wins by a living artist?

That’s right, while the world got swept away (and rightly so) by Adele and her run at 6 Grammy awards Sunday night, Alison Krauss quietly became tied for the most Grammy awarded living artist. The 40-year-old bluegrass veteran racked up her 27th Grammy. She has now tied legendary producer Quincy Jones.

She won for her album, Paper Airplane, with her band Union Station as “Best Bluegrass Album.” The popular artist is now just 4 Grammys away from tying conductor George Solti at 31 for the most all time.

“It’s still exciting after all this time. We don’t make a record every year or every couple of years so you are never sure if you are going to get the chance to come back.”

Way to go Alison and as a shout out here’s a clip of her and Union Station playing the title track “Paper Airplane” on Letterman. At the end he makes a joke about all of her Grammys:

I’d say she’s earned every single one of ’em.