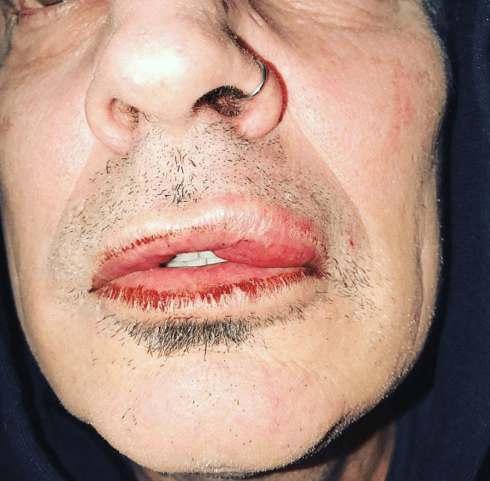 Tommy Lee says the punch to the face he got from his 21-year-old son Brandon left him unconscious and had his fiancée thinking he was dead. Lee’s fiancée, Brittany Furlan, called the cops after the altercation, but, by the time they got there Brandon was gone. After spending Monday night in the hospital, Tommy took to social media on Tuesday to try and get out ahead of the story.

“My fiancé and I were in bed when my son busted into the room and assaulted me,” Tommy Lee tweeted Tuesday night. “I asked him to leave the house and he knocked me unconscious. He ran away from the police. THAT’S the truth.” The rocker also took to Instagram to share a photo of his busted lip (seen at the top of the article).

After that, though Brandon’s mom Pamela Anderson shared her perspective on the situation — and it’s a very different tale. Pamela told TMZ that her ex-husband Tommy is a “disaster spinning out of control” and deserved the blow.

After Pamela got her story out, the back-and-forth continued in Tommy’s Wednesday post. Tommy denied that he had an alcohol problem, saying he only has “a few drinks here & there.”

The whole blow-up seems to stem from some tweets Tommy Lee made in reference to a recent interview Anderson did with Piers Morgan. During the interview Morgan brought up Lee’s 1998 arrest for spousal abuse.

“Think she’d find something new to discuss instead of rehashing old s**t but I guess she has nothing else going on & needs attention,” Tommy tweeted. He followed up with “Signed, ‘The abuser’ (who she texts everyday & asks for me back).”

“Beware of tabloid gossip.
This is a matter of life and death. I am surreally calm
– I feel justice is at work.
I am not frantic or ‘as reported’ – Devastated. I am hopeful –
This is not new to us -“

In the statement she gave to TMZ, Pamela stated that Brandon just wants his dad to quit drinking and was working on staging an intervention for him before all this went down.

“He still cannot handle the guilt about his abusive behavior and has never taken responsibility for what he has done,” Pamela wrote. “Let’s hope this will be his saving grace.”

Tommy’s latest Instagram post is an inspirational quote asking people to not judge others by their past actions:

PHOTOS You’ve never seen Pamela Anderson like this before…